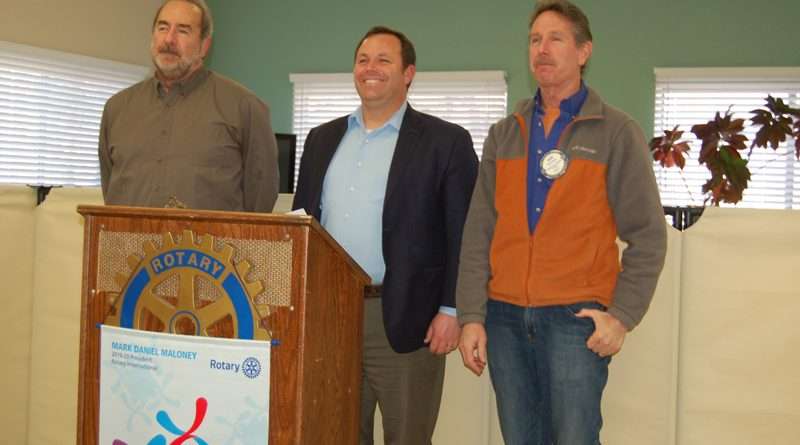 Trevor Albertson, Lassen Community College’s acting president/superintendent, announced the arrival of a new era at the college up the hill during the Susanville Rotary Club’s Wednesday, Jan. 8 meeting.

“When I first started teaching up at Lassen College in 1987, I think we can all agree at that time the college was a jewel in the community,” Siemer said. “The college was a vibrant place. If you recall, the wrestling team was always nationally ranked, we had two state champion girl’s basketball teams and nighttime the place was hopping. Since being elected I’ve spent quite a bit of time on campus, and you don’t see that anymore. It’s kind of sad.”

Siemer said he wanted to see the college built back up and return to its previous status.

Siemer acknowledged the turmoil and financial challenges facing the college due to an unexpected $2.4 million budget shortfall.

“We’re hurting,” he said. “We’re in a tough, tough position. With Dr. Hall leaving, it’s a time for us to have a new start, and really look to see in what ways we can engage the community.”

Siemer said there are many plans for the old cogen plant on campus as an “educational/community type facility.”

Possible uses include a performing arts center, a gunsmithing center and a maintenance center.

“It’s a big facility, and once we gut it, clear it out and get it all back up to code, there’s a lot of opportunity,” Siemer said.

Albertson talked about his past — growing up on a ranch in Shingle Springs, California, attending the Norwich Academy and was on the faculty at the Air Force Academy, attending grad school earning a master’s degree and a doctorate, flying KC 135s (aerial tankers) and becoming an Air Force intelligence officer before beginning a career in higher education.

“I loved going to graduate school, I loved the things I learned, and I loved watching people learn from what I could share,” Albertson said. “That’s what brings me here to Lassen County, to Lassen Community College.”

Albertson said he didn’t want to say anything bad about anyone, but it was time for “a strategic reset at the college. It’s time for change.”

Albertson said he came to the college more than a year ago and it’s time to look to the future.

“Let’s talk the important stuff first,” Albertson said. “We’re going to change the organization up at Lassen College,” he said. “We’re going to go back to a more traditional structure. We’ll have academics — those are the people who teach and help people learn. We’re going to have student services — that’s another division where we help students get what they need to learn. And then we have administration — the folks who run the college day to day — finance, maintenance, budget/payroll, HR, things like that.”

He said he’s hoping the new the vice president for instruction — a former Marine and a person everyone would know who taught at the college for 20 years — can be announced soon.

Dr. Randy Joslin, an Air Force veteran, will be the vice president for administration

Brady Reed will serve as the vice president for student services.

“It’s time to get the right people in the right jobs,” Albertson said.

Things to explore in the future

Albertson also wants a memorandum of agreed principles regarding the relationship between the high school and the college.

“We’re going to start doing dual-enrollment classes where students from the high school come to the college to take their courses,” Albertsons said. “I’m less worried about who gets the credit for those courses in terms of payment from the state, I want to see the students educated because when you improve relations and you get the students educated, people want to come up to the college, and that’s important.”

Albertson admitted the college has failed in regard to transparency.

“We have to be more transparent as a college,” Albertson said. “That’s not on the board. It’s on the administration. We have to open up our books and our campus for people to see what’s going on up there, and that’s starting immediately with a group called FCMAT. The Fiscal Crisis Management and Assistance Team will be paying us a visit on April 14. FCMAT is not coming to take over the college. You may have heard of them. They’ve been here before. I’ve invited them in. They’re going to conduct a limited-scope review of our books and our enrollment management practices to tell me where our problems are. I can’t fix things unless I know where they’re at.”

“Community colleges are now enabled by the state to offer bachelor degree programs,” Albertson said. “I haven’t established an exploratory committee yet, but that’s where we’re headed. We need that in this community. You should be able to complete a four-year degree in Susanville.”

The University of California is prepared to offer distance-learning classes on the LCC campus, Albertson said.

Albertson said, “We can’t be a community college unless we know what the community wants and needs.”

To begin that conversation, those who have comments can email Albertson directly at [email protected]

“That comes straight to me, and I’ll check it every day,” Albertson said. “Give me a couple of days to get back to you.”

**This post was corrected to accurately state where Albertson attended school.