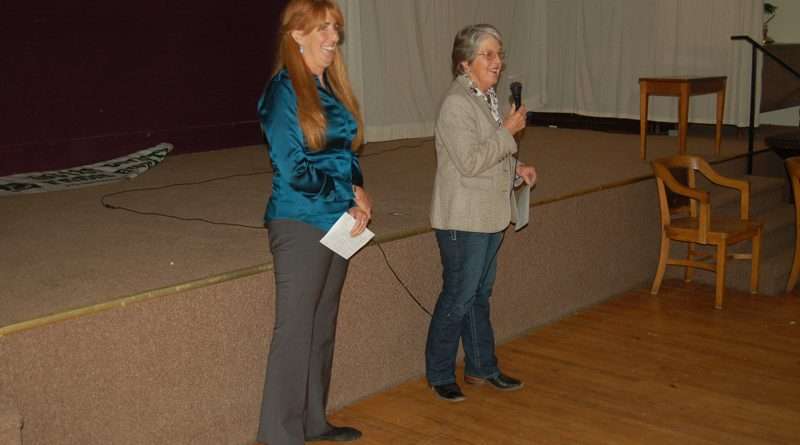 According to its website, the California Wolf Center is “dedicated to the recovery of wolves in the wild lands they once roamed. We envision a landscape where wolves thrive in healthy ecosystems and wolves and people successfully coexist. We recognize that to make wolf recovery possible on today’s landscape, ranchers living with wolves and stewarding our open spaces are a key part of the effort. The California Wolf Center is an advocate for ranchers who are the conscious stewards of open space where wildlife, including wolves, can live –– providing benefits to the land and wildlife through their grazing practices while protecting it from development.”

Vardaman and DeForest both said during their interactions they have learned from each other — Vardaman learning that ranchers are environmentalists who care for the land, and DeForest learning about the efforts of groups such as the California Wolf Center.

The solution to the wolf issue in California is communication, they said.

DeForest said when she heard about the wolves coming into California, she couldn’t believe it, and she wondered why the state was doing this to us.

“People just don’t understand where we’re coming from,” DeForest said. “We’re good people. We care about the environment. We’ve got to educate them on why we do things.”

People in the urban areas get excited about the wolves’ return, but they’re not impacted, which frequently leads to an us versus them confrontation. The solution, they said, is communication.

”Your heartwarming story about your friendship makes me want to reach over and hug Wally (Roney, the rancher whose calf was recently the first confirmed wolf kill in California this century),” said one rancher. “But in reality that kind of relationship has gotten our industry into trouble in the past, and this wolf plan is a perfect example where now the department of fish and wildlife bills the wolf plan as having collaborated with ranchers when nothing could be further from the truth. And I worry that that same thing could happen with your organization.”

Deforest said ranchers and farm bureau members were part of the discussion that created the wolf management plan.

“I take offense that Karin and my relationship has gotten us in trouble,” DeForest said. “By not talking to Karin and other people, where has that gotten us?”

Roney again said he was leaving Lassen County because he couldn’t afford to feed the wolves.

“I’m gone,” Roney said. “That part of agriculture is gone from Lassen County … What the people in Lassen County need to know, is once I take that food source away, my problem has left. Now you’re going to have the problem because they’re hungry and there’s nothing out there for them to eat. That is inhumane to the wolf.”

Another rancher asked the question on nearly every rancher’s mind — why are the wolves here?

“Can you please explain to me you and your organization’s justification for having the wolf in California?”

DeForest said the group was supporting the wolves’ return to its natural habitat.

“What is your justification for having the wolf here?” the rancher asked again.

“Justification, I guess I’m struggling with that term,” Vardaman said. “What we do is we do believe in protecting native species. And the wolf was here at one time. How many wolves, probably not a whole lot, nobody knows for sure. But they are returning on their own, so we believe the wolves should be managed whether you like them or you don’t like them, but it’s an intrinsic right as far as wildlife to be here. But with that, we also feel we need to take responsibility for what that impact might mean on people actually feeling that effect.”

Vardaman and DeForest also discussed how government officials determine a wolf kill and said protecting the site and the carcass are vital. They also said ranchers can use non lethal methods to keep the wolves from attacking their livestock. They said the state would delist the wolves once there were eight mating pairs in California.

“We need to be responsible for our own cattle,” DeForest said.

Responding to a question from a rancher, Vardaman said ranchers could haze the wolves as long as they didn’t injure them. The rancher said he didn’t believe that was true under the federal Endangered Species Act.

“Harassing an endangered species is a criminal act,” the rancher said.

The rancher said the issue centers on differences between state and federal law. While it might be legal to haze the wolves under state law, that conduct remains illegal under federal law.

Vardaman said ranchers should make wolves uncomfortable when they’re in places where they should not be.

What about the wolf dogs?

They also answered questions about wolf dogs in Lassen County that are allegedly being bred in Ravendale and Chester. Allegedly hundreds of these wolf dogs have been released into the wild.

“It’s illegal to own a wolf, it’s illegal to own the next generation,” a rancher said. “What are these things? They look like wolves. When they come out there and eat your stock and you can’t do anything to defend yourself, we’ve got some serious constitutional issues out here as to your constitutional right to engage in your profession and to productively use your property.”

Calling the wolf dogs that greatly outnumber the wolves the “800-pound gorilla in the room,” he wondered how the ranchers could protect themselves.

Another rancher said the wolf dogs look like wolves, so how can one know the difference between them?

“It’s a real issue, absolutely,” Vardaman said. “Certainly we haven’t dealt with the wolf-dog issue, but it’s becoming clear we might have to.”

Vardaman said while wolves are protected, wolf dogs are not, and “they’re a lot tougher to manage.”

“We’re all in this together,” DeForest said. “We ranchers are the greatest people in the country. We have so much to provide for the rest of our country. Go forward holding your head high. We’re going to get through this.”

One thought on “Advocate, rancher talk about living with wolves”