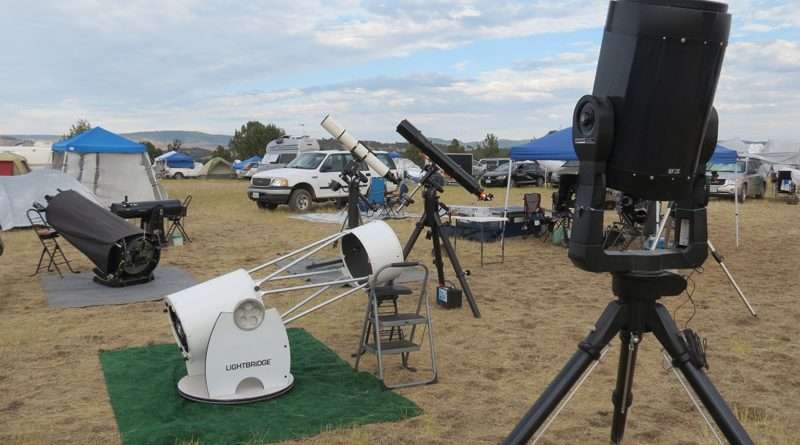 During the day the Frosty Acres Ranch in Adin sits high enough to see the surrounding mountain ranges amongst a wide, windy and rolling range of grass. The summer sky, during its days, is always swelled with the warmth of the sun and its sights behold a solitude seen in many pockets of Lassen County. At night, the ranch’s sky is transformed. Mountains carve the sky, outlining and revealing the face of the immeasurable universe.

Once a year, this range of grass, in the middle of a California gem of beauty and solace, is taken over by a frenzy of astronomy enthusiasts from across the country, for what is known as the Golden State Star Party.

From the novice participant with only a pair of binoculars to renowned astronomy associations with their trailers for just their telescopes from multiple states, the event is the quietest and darkest party in the state.

As the sun goes down, blue or white-light flashlights and headlamps, vehicle headlights and bright phone screens are frowned upon. Only soft and red lights are allowed around the campground to mitigate light pollution and interference with others’ stargazing experience. The rules are set and curiosities about the universe are welcome.

People with telescopes throughout the campground-like atmosphere (set up with corresponding sections named after planetary objects within the solar system) are happy to share a peek into the stars with newbies. Throughout the event’s site, hundreds of telescopes are set up for optimal viewing, some bigger than the canopies they were under, unable to be assembled before getting on-site.

For 11 years, Lassen County Board Supervisor Aaron Albaugh and his wife, Becky Albaugh, have hosted the party at their Adin ranch. The brains and passion behind the party lies, however, in the heart of the GSSP’s director, Rich Ozer.

Ozer’s gregarious and excitable personality was reflected in the eyes of every participant. As a tech entrepreneur in the San Francisco Bay Area, Ozer has been tinkering with telescopes since his days as a photographer and journalist.

Ozer said he was one of those kids who dreamed of working for NASA, but said, “I turned out to be the kid who ended up starting his own business, so he could spend time going to places like this without having to constantly justify it to my superiors,” as he laughed and sipped his lemonade.

Ozer continued, “I’ve always been interested in astronomy as a science ever since I was in middle school.”

Ozer’s passions led him on a path of serendipity, and when he moved to Oakland in 1992, Ozer said he “kept seeing this sign that said observatory and planetarium.”

So Ozer followed up on his curiosity and “one of the astronomy clubs that I’m still very active with, ran programs at the Chabot observatory in Oakland.”

One of the classes at Chabot, which Ozer became fixated on was telescope making. Ozer said he “wanted some kind of creative outlet” while he was raising a family and working.

Ozer explained the happenstance history of the event and said, “If you were to trace back the origins of this event, it would go back several decades. It would go back to the 80s; going to the Mt. Lassen area.”

Ozer’s time in the Bay Area, spent simmering in his interests, led him to an informal group, which was called TAC. This group, Ozer said, would “secure observing sites for frequent small astronomy outings near the city, mostly. Going to urban parks, anywhere from one to three hours from the city.”

They would secure park permits for their gatherings, and every year TAC would host an event in Lassen County, which happened in Shingletown for years. Ozer ended up falling in with the group and eventually became one of its directors.

“We met the Albaughs because of two people we knew from Chabot.” Those two, Ozer was referring to, “The Medlocks … have a horse ranch in Fall River Mills,” called, “Star End Farms.”

“When we told them we were looking for a new site to have the event, they were on the short list,” continued Ozer.

From their first year in Adin, until now, the GSSP has been an attraction for many astronomy lovers. In fact, Ozer was proud to say the event continues to be the largest event of its kind in California, and is hosted every year in Lassen County.

The event now boasts between 300 and 500 participants every year. The people who come to these events vary in their occupations and lifestyles, and Ozer said some of the people attending are, “really smart people who are very unique. Some are teachers, some are artists, some are professional astronomers and some are software designers. There’s all kinds of really interesting people and I’m always hoping some of it rubs off on me.”

One of the lead activities of the weekend-long event was a documentary called “Saving the Dark.” The documentary, produced and directed by Sriram Murali, centers around astronomy and light pollution. It entails and boasts the significance of astronomy and the night skies, showing how light pollution affects the view of the night skies, human health, wildlife and what can be done to fight it.

Murali’s film before the reveal of “Saving the Dark,” called “Lost in Light,” was a huge success and was featured on National Geographic and was seen more than a million times.

“Saving the Dark” was a nonprofit movie, made only for educational purposes. At the GSSP screening of the film, Murali stated his intention to highlight many of the documentary’s points to bring the subject matter to local governments and organizations contributing to light pollution throughout the country.

On a similar note, Ozer, referring to the work of the documentary, told the newspaper to ask for responsible lighting within the community; highlighting the difference between the more natural lighting surrounding Lassen County compared with the lighting of the local prisons.

“There was a prison in Texas where (light pollution) was becoming a problem and the astronomy community worked with the prison to put in responsible lighting there. It cut back on the sky glow by a huge degree. It also made the lighting better for the prison, because the people who are guarding the prison, they’re sitting there with these bright lights in their eyes. They can’t see. That’d be perfect if someone wanted to try to escape.” Ozer then went on to say, “Responsible lighting is not unsafe lighting. It just means direct the light down where you need it instead of wasting it by throwing it out into the atmosphere for no reason at all. That seems like a good target for Susanville. I’ll talk to Aaron about it.”

Escaped inmate is back in custody; he and girlfriend arrested after ‘stand off’ in Nevada

A new measure would impose excise taxes on the sale of guns and ammunition, use proceeds to fund school safety and…