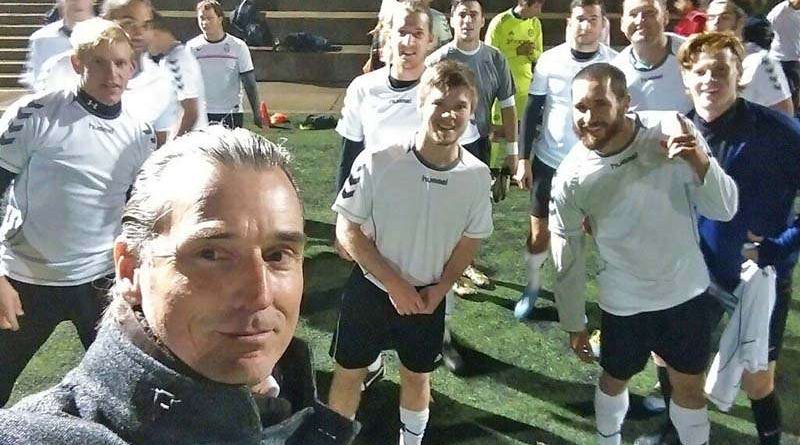 Ben Wade, left, poses with the Redding Royals after playing a scrimmage against a team in the Bay Area. The Royals won the game 4-2.
Sports
December 6, 2016December 13, 2016 Ashley Grogan, Sports Writer

Wade, who has been offered many coaching positions since his declared retirement, commented the timing of this position is perfect, and he was happy to accept.

The official season for the semi-professional team begins in May and finishes in August. All work prior to May is based around providing the team a solid foundation of practice and teamwork.

Wade commented about his relief of the timing regarding the team, as the last Susanville Symphony Society performance of the season will be in May. The following season of the symphony will not begin again until the Royals are no longer playing in conference.

“For me, 100 percent, what comes first is my family,” Wade said. “After my family comes the symphony.”

Wade said his family will remain in Susanville as they have made the area their home. However, he is looking forward to spending one day per week with the team during the pre-season months and then spending a majority of his days with the team over the course of the summer.

Wade said he is excited to coach the Royals for many reasons. One of which is the similarity between the team’s values and goals and his.

The Royals are clearly not interested in making fools of themselves and wasting time. The team will be playing in the Pacific Premiere League for the 2017 season, and they plan to move up a division each year.

According to Wade, the team has the ultimate goal to play in the top professional competitive league in America and put in a bid for Major League Soccer in five year’s time. The Royals’ determination leads them to understand that their five-year plan is not out of the realm of possibility.

“I like to put the goals really high. I like to set the bar really high. So, for them to want to do the same thing is consistent with what my aspirations are,” Wade said.

Wade is anticipating that the men will put a lot of hard work into practices and games.

He said, “For me, of course, first team, brand new team right out of the gate, we’re going to win the Pacific Premiere League. That’s a no-brainer.”

Wade later continued, “We’re also going to play other teams that are in higher divisions than us. We want to make a statement not just with our level but with levels that are above our level.”

With a positive attitude pumping throughout members of the team, the season is looking to be bright for the Royals.

As a coach with a lot of experience, Wade expressed his favor toward professional coaching.

One of the benefits includes the lack of time restraints place on the team’s players. Unlike college sports, the players’ participation is not solely reliant on their year in school. This lack of a time limit allows the team to build a sturdier bond as well as a stronger sense of loyalty.

Additionally, Wade commented how much he appreciates that the men on his team will not be paying to play. With college athletics, regardless of scholarships offered, Wade said that the players still pay a certain amount to study at the school, which translates to the men paying to play.

With the Royals, the men will be able to focus entirely on playing; Wade expects a greater performance because of this.

One of the advantages the team has gained since its decision to hire Wade is its international diversity has increased.

Wade commented that many of his former players have contacted him with interest in trying out for the Royals. With former players that currently reside in France, Germany, Brazil, England and around the United States, Redding has become more of a hot spot than before.

The fact that former players are contacting Wade has reinforced his belief in loyalty. He is anticipating at least 10 men who have played for him in the past to be a part of the Redding Royals team.

“The loyalty is really cool because that’s something that’s always been very important for me to instill in my teams,” Wade said. “We’re a team; we’re a family. The loyalty is just a really big part of who I am. It’s why I love Susanville so much, because of the reciprocated loyalty from the symphony and from the things that I’ve done here.”

Regardless, this is a great opportunity for the Wade family, Redding and surrounding communities.

Wade said, “In every place that I’ve been, I’ve always tried to tell people that we’ll have a vision, we’ll promote that vision, we will achieve greatness, change lives. And I think this team will change the community of Redding.”

Wade compared Redding to Pittsburg, Pennsylvania in the sense that the nation sees Pittsburg as home to the Steelers and a place to be celebrated. Wade envisions the same effect to come to Redding once the Royals develop to their full potential.

“The ripple effect that goes out from the team into the community is incredibly important,” Wade said.

Additionally, Wade pointed out that the Royals will provide motivation for local players. Having a more local semi-professional team will help the position seem more attainable than before.

The Redding Royal Football Club has core values of integrity, honor and respect. Wade commented that instilling these core values into players will change the players, the team and the community.

Wade would like utilize the coaching style he has gained in order to help the team fulfill their values and aspirations.

Wade commented that he has taken a piece out of each team and coaching staff he has been able to work with internationally to devise the best coaching strategy he thinks fits his players.

He said, “Every place that I’ve had the opportunity to coach or coach high-level players from that area, I have just grabbed a piece of their style and made it into my own style.”

Wade later continued, “The English play very technical, possession-type play, and so I have that. The African teams play with a lot of speed and power, so I look for that. The Argentineans have a great flare and one touch around the box; they’ve always been very attacking-minded teams, so I’ve kind of grabbed that from the teams down there. And the Germans are very disciplined.”

With the experience Wade has gained throughout his years of coaching, the Redding Royals are looking to carry out a great season of competition, loyalty and passion.

“I think it will be a success. I’m looking forward to building a future with them,” Wade said.

The Royals will begin their extensive training with Wade in May 2017 once the symphony season has closed.