The Forest Service is proposing to take management action to respond to conditions created by the Hog Fire along the Bizz Johnson National Recreation Trail (Bizz Johnson Trail). The Hog Fire burned across and along the corridor of the Bizz Johnson Trail, damaging or destroying structures at numerous locations where the trail crosses intermittent drainages. The Forest Service evaluated the condition of the trail and identified opportunities to repair 6 box culvert crossings and replacement of decking on the Lower Bizz Johnson Bridge using funds from the Federal Highways Administration as well as doing repairs internally (Figure 1).

The area was evaluated for opportunities to meet the need to provide safe access and use of the recreation trail corridor by the public. Proposed activities include the Lassen National Forest (LNF) repairing box culverts 6, 7, and 9 which were only partially damaged during the Hog Fire. The Federal Highways Administration is funding and contracting the work to replace the damaged timber decking on the Lower Bizz Johnson Bridge. Additionally, they will be responsible for replacing the burnt timber decking and stabilizing the concrete abutments at box culverts 8, 12, and 14.

The Bizz Johnson Trail Post-Fire Repairs Project is located approximately eight miles west of Susanville, CA along the Susan River Canyon, north of State Highway 36. The project area extends along approximately 2 miles of the trail corridor, but project activities are at six specific locations on the trail. The project area is located within the Susan River watershed and extends through parts of T.30 N, R.10 E, Sections 34, and 35; T.29 N, R.10 E, Sections 1 and 2 of the Mt. Diablo Meridian.

The Hog Fire was discovered on July 18, 2020 and burned a total of 9,564 acres, 2,880 acres being on National Forest System land. The fire burned across approximately 5 miles of the Bizz Johnson Trail between the Goumaz Campground and the Devil’s Corral Trailhead, directly affecting about 2 miles where drainage structures were damaged to various degrees. Damage resulted in the temporary closure of this section of the trail for public safety.

The purpose of this proposal is to repair areas of the Bizz Johnson Trail damaged by the Hog Fire in July 2020 on the Lassen National Forest. This entails repairing drainage structures that were damaged or destroyed. Concrete box culverts that provided flow from side drainages under the trail bed were completely burned and destroyed where the fire was most intense (Figure 2). Other structures had partial damage to wooden portions of their exterior. This damage occurred on approximately 5 miles of the Bizz Johnson Trail which will be closed to public access while construction repair efforts take place.

The proposed action repairs, within USFS lands, would consist of repairing 6 box culverts (#s 6, 7, 8, 9,12,14) and the repair of decking timbers on the Lower Bizz Johnson Trail bridge which were damaged during suppression efforts for the Hog Fire. Repairing box culverts 8, 12, and 14 include the removal of the aggregate rock trail bed in order to access and replace the burnt timber decking situated in between two concrete abutments at each site. The removed aggregate fill material would be stockpiled and staged for later use. The concrete abutments will be repaired and stabilized by epoxy crack injections to the concrete structures as well as drilling steel dowels into the abutments where appropriate. Box culvert 8 will have a timber bridge installed behind and over the top of the existing drainage structure abutments. Afterwards the aggregate and trail bed would be restored to its previous condition utilizing the previously stockpiled material. Concrete post holes would be established at each corner of box culverts 8, 12, & 14 for further stabilization. Repairing Box Culverts 6, 7, and 9 involves replacing the exterior burnt timber decking and restoring the trail bed surface. The decking timbers at the Lower Bizz Johnson Trail bridge next to Goumaz campground would be replaced complimentary to its condition previous to the fire.

The following Integrated Design Features (IDFs) are resource protection measures that were developed by specialists and incorporated as part of the Proposed Action for this project. They are in addition to Best Management Practices (BMPs) and Standards and Guidelines from the Lassen Lands and Resource Management Plan, as amended. These IDFs are also included for implementation parameters that would be incorporated into treatments and contracts and/or used to guide contractors and Forest service personnel during implementation.

All potentially eligible and unevaluated historic properties (archaeological sites and or features) will have their site boundaries flagged for avoidance and protection using “flag & avoid” methods inside all treatment areas, proposed actions or undertakings within the project’s area of potential effect. However, with the approval of the District Archaeologist, there are special circumstances that allow for the following IDF’s:

•  Historic properties within or adjacent to planned treatment areas, activity areas, or roads would be monitored before and after project completion.

•  Linear sites such as historic roads, ditches, or communication lines may be crossed on a limited basis in previously disturbed areas. All crossings would be made perpendicular to the site, and the site would be returned to its original design at project completion. All crossings would be designated by the District Archaeologist. The number of crossings is to be minimized by project and amongst multiple projects in the same general location. The remainder of the linear site is to be avoided, and traffic is to be clearly routed through designated crossings.

•  Installation or placement of erosion control devices, ditches, features or other treatments may be placed within site boundaries when such measures are reviewed by the District Archaeologist and hydrologist or soil scientist, and their use is proved as unlikely to affect the integrity of a historic property.

•  If cultural resources are identified during project implementation (unanticipated discovery) all work would stop immediately in the project area until the situation is reviewed by the District Archaeologist.

•  Felling and removal of hazard, salvage, and other trees within historic properties under the following conditions after the approval of the Forest Service Archaeologist:

•  Placement of barriers within or adjacent to site boundaries may be installed to prevent access to or disturbance of deposits or historic features, such as the culverts on the Bizz Johnson Trail, or for protection of other sensitive resources on-site, when such barriers do not disturb subsurface deposits or lead to other effects to the site.

•  When any changes in proposed activities are necessary to avoid historic properties (e.g., project modifications, redesign, or elimination; removing old or confusing project markings or engineering stakes within site boundaries; or revising maps or changing specifications), these changes shall be completed prior to initiating any project activities and must be reviewed by the District Archaeologist.

•  Only Forest Service archaeologists responsible to manage heritage resources, shall make final determinations of eligibility, final management recommendations, and heritage design measures for historic properties or materials (isolates, sites, or features) within areas of potential effect for this project.

•  New occurrences of threatened, endangered, or sensitive (TES) plant species discovered before or during ground-disturbing activities will be protected through flag-and-avoid methods.

•  New small infestations identified during project implementation would be evaluated and treated according to the species present and project constraints and avoided by project activities. If larger infestations are identified during implementation, they would be isolated and avoided by equipment, or equipment used would be washed after leaving the infested area and before entering an uninfested area.

•  Post-project monitoring for implementation and effectiveness of weed treatments and control of new infestations would be conducted as soon as possible and for a period of two years after completion of the project.

•  If project implementation calls for mulches or fills, they would be certified weed-free. Seed mixes used for revegetation of disturbed sites would consist of locally adapted native plant materials to the extent practicable.

•  Use suitable measures to locate, construct, and decommission or stabilize bypass roads to avoid, minimize, or mitigate adverse effects to soil, water quality, and riparian resources.

•  Use suitable surface drainage and roadway stabilization measures to disconnect the road from the waterbody to avoid or minimize water and sediment from being channeled into surface waters and to dissipate concentrated flows.

•  Use suitable measures to avoid, minimize, or mitigate damage to the waterbody and banks when transporting materials across the waterbody or AMZ during construction activities.

•  Avoid placing abutments in the active stream channel to the extent practicable.

•  Trees that are located outside of mapped treatment areas that are identified as hazards to roads or operators would be felled and left on the ground to contribute to downed log habitat. 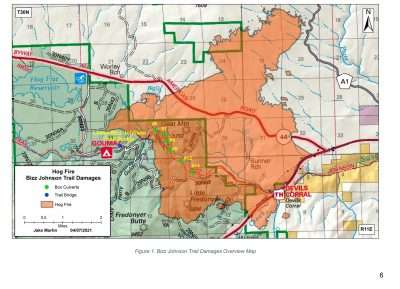 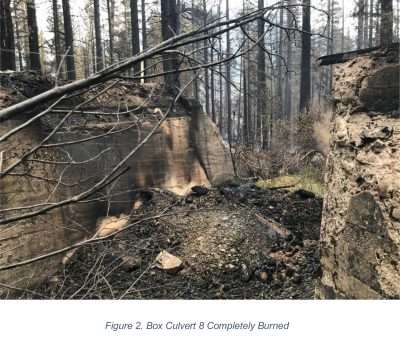 SAC Wireless, LLC is proposing to modify an existing wireless telecommunications facility on an existing self supporting lattice tower located…