Commercial marijuana cultivation and marijuana dispensaries could be coming to Susanville later this year.

The Susanville City Council directed staff to begin developing a city ordinance that would allow indoor commercial cultivation of marijuana and dispensaries within the city limits at a two-hour special meeting held Thursday, Feb. 24 at City Hall that included comments from many city residents.

The councilmembers did not vote on the matter, but three members wanted the city to move forward while two did not. 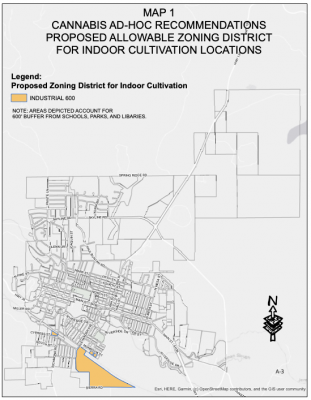 According to the staff report, the Feb. 24 meeting was a step in the implementation of the commercial cannabis plan. A public hearing on the matter is scheduled for April 20 and the council could adopt an ordinance as early as May 4.

According to the staff report, the general industry activities for commercial cannabis include: indoor and outdoor cultivation, manufacturing, testing, distribution and retail and/or dispensaries.  The committee found the potential economic benefit very encouraging because the industry lacks major manufacturing and distribution centers north of Sacramento. Given the the state highway infrastructure within Lassen County, the ad hoc strongly feels that “with an attractive tax rate, Susanville could be a major hub for manufacturing and distribution.” 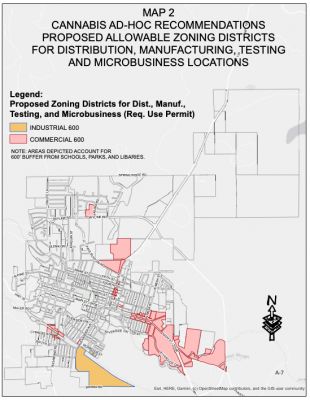 “To be attractive and competitive to industry proponents, the ad hoc is proposing a 2 to 3 percent gross receipts tax on any commercial cannabis business,” according to the report. “For reference, Lassen County’s Tax Measure M is 8 percent. This would require a tax measure to be placed on a ballot for community voter approval. If a tax measure becomes unfeasible or fails, the ad hoc proposes that a special business tax directed at commercial cannabis activities be adopted by oirdinance in lieu of a tax measure for the interim.”

Councilmember comments
Councilmember Thomas Hererra announced he is going to run for election again so he can support the marijuana industry within the city. The council appointed Thomas to serve until the next election after veteran councilmember Brian Wilson declined to take the seat to which he’d been elected.

“If you don’t want to vote for me because I’m voting in favor of marijuana, that’s on you,” Hererra said. “I’m going to do what’s right … to save our community. We’ve been saying no for too long and it’s gotten us nowhere because we’re afraid of change … What would our kids think if they knew we were facing bankruptcy and didn’t do anything about it?” 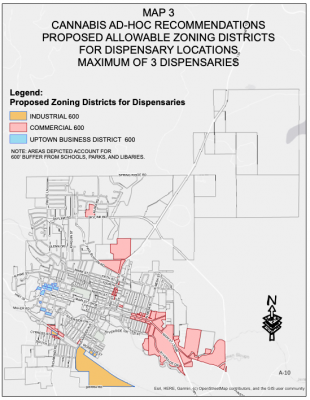 He pointed out that state law allows any Susanville resident to legally grow six plants indoors within their residence regardless of any action taken by the council, so marijuana is here legally for anyone who wants to smoke it.

He said the illegal cartel grows are out of control in the county. The city is facing bankruptcy and he wondered why the council would reject opportunities to generate more revenue from legitimate business people who follow all the regulations and want to bring new businesses to town and “make Susanville a better place … You’re telling me that a legal marijuana business is more scary than a guy with an AK-47 in your backyard? I don’t think so.”

He also lamented other business projects and grants of which the city failed to take advantage. He suggested residents should be much more concerned about the armed cartel grows all across the county than the regulated legal indoor grows if and when they come to the city.

In addition, he said the Susanville Police Department would get a million-dollar grant for law enforcement if the city allows commercial cannabis.

“It’s time we start taking money instead of turning it away,” Hererra said. “I’m not really afraid to stick up for what’s right because I am going to take responsibility. It’s about the entire community.”

Hererra said there’s a huge demand for cannabis in Northern California and he’s in favor of creating a “warehouse industry” and “a distribution center” in the city of Susanville and those activities “are not going to affect us” because they will mostly be out of sight.

And, according to Hererra, “smoking weed is one of the healthiest things you can seriously do.”

After offering a litany of complaints and issues facing the city, he said, “The biggest threat to our youth, and I’m just going to be brutally honest right now, is date rape drugs.”

Councilmember Brian Moore simply thanked the public for attending the meeting and offering their comments.

Councilmember Kevin Stafford thanked Hererra for his comments and said he had to strike several items off his notes.

He said Lassen Community College could train the warehouse employees and lab techs to work at the grows.

“It’s just amazing what these places can do,” Stafford said, “and they give back to the community. That’s one of the big things they do. How can that be a bad thing? … This is a way to go forward.”

Councilmember Quincy McCourt said, “Thomas — rock and roll, man … You wrote and hoped and spoke about it … ”

“This topic — I don’t even understand why it’s controversial at all, not even a little bit,” McCourt said. “For me, it’s as simple as I definitely don’t want to create a law that forces you to conform with my values. Aside from that, mathematically it makes fiscal sense on every single level. Every single level. You can’t argue with that.”

McCourt also blasted the conservatives in the county who don’t want people getting involved in their business, but they’re willing to take a stand on this issue — which is essentially other people’s business. He also mentioned several members of the community declined to speak with him about the issue and then offered a lecture about the importance of communication.

Mayor Mendy Schuster noted “the Constitution overrides state law … There are no illegal grows in Susanville to my knowledge.”

What’s in the ad hoc committee report?
City Administrator Dan Newton said the ad hoc committee’s report and recommendations were not available to the public prior to the meeting because the committee wanted to make its presentation to the council and perhaps receive direction before the report was released to the public. The report was made available on the City of Susanville Administration Facebook page the day after the meeting, Friday, Feb. 25.

Here’s some information included in the portion of the report written by Newton.

At this time, a total of 18 states have legalized cannabis for recreational purposes and 39 states, plus Washington D.C., have legalized medical marijuana.

Cannabis legalization processes in the state of California are as follows: In 1996, the California electorate approved Proposition 215, the Compassionate Use Act of 1996, which allows a patient, with a doctor’s recommendation, to use cannabis for medical purposes without the fear of prosecution or arrest. In 2003, the California legislature passed Senate Bill 420 (Medical Marijuana Program Act) which amended the Health and Safely Code to permit the establishment of medical cannabis dispensaries for the distribution of cannabis for medical purposes. In 2005, the California Board of Equalization began issuing seller’s permits for sales consisting only of medical cannabis. In 2008, the California Attorney General issued guidelines for the security and non-diversion of cannabis grown for medical use. On Oct. 11, 2015, the governor signed into law Senate Bill 643, Assembly Bill 266 and Assembly Bill 243, collectively referred to as the Medical Marijuana Regulation and Safety Act further amended on June 27, 2016, as the Medical Cannabis Regulation and Safely Act, which established regulations and a state licensing system for medical cannabis cultivation, manufacturing, delivery, and dispensing.

Subsequently, the voters of the State of California approved and passed Proposition 64 also known as the Adult Use of Marijuana Act. In preparation and in response to all of the aforementioned legislation, the city of Susanville adopted an ordinance in 2005, effectively placing a moratorium on commercial cannabis activities and in 2015, a moratorium on medical marijuana grows within the city limits. In 2019, the city considered a commercial cannabis ordinance, but it did not receive favorable support from the community or the city council at the time. Therefore, the existing ordinances regarding the stated moratoriums are still in effect. To date, roughly nine counties and 50 cities in the state of California have adopted some form of cannabis ordinance with established tax rates.

“As the Fire Chief of Susanville I can find no plausible fire or life safety reason to deny an opportunity to allow certain cannabis activities in restricted numbers within the city limits,” Moore wrote.

“Several regional law enforcement agencies that have allowed the retail sales and cultivation of cannabis within their jurisdiction were contacted,” Cochran wrote. “It was reported that there have been no significant increases in crime regarding cannabis.”

Finding 3: The ad hoc committee has found that the legal cannabis industry pays license fees to the state and local jurisdictions and state and local taxes. The ad hoc committee has observed that the costs to operate a legal cannabis business in California is difficult due to the high taxes and fees in addition to the costs of meeting regulatory compliance.

Finding 5: The ad hoc committee has researched the number of cannabis users in our community. Given statistical norms a conservative estimate is that 14 percent of our adult population uses cannabis. Allowing legal cannabis within our community will provide our citizens safe and convenient access to cannabis products.

Finding 6: The ad hoc committee has researched local regulations on the cannabis industry. The city’s land use authority allows for regulating various cannabis activity to specific zones within the city in addition to placing requirements on cannabis businesses to ensure safe and discrete operations at appropriate locations.

Recommendation 2: To ensure that the city of Susanville is a marketable location for cannabis businesses to become established, the taxes and fees should be set at competitive rates. The Susanville City Council should adopt a local business tax ordinance setting taxes and fees for cannabis activities and place the item on the ballot at the earliest opportunity after June 7, 2022. The taxes for cannabis activities should represent 2-3 percent of gross sales and should be scalable to increase up to 8 percent to coincide with the Lassen County ordinances.

Recommendation 3: To ensure community benefits, the Susanville City Council should explore other revenue options in the interim between allowing cannabis activities and establishing a cannabis tax.

Recommendation 4: Offer storefront cannabis retailers an onsite threat assessment by law enforcement. This will be available to all employees to aid and identify any potential indicators of possible robberies and suspicious activity at their location. 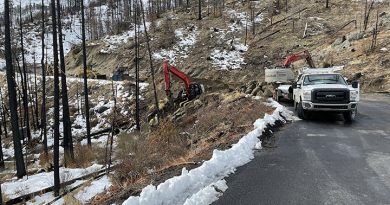