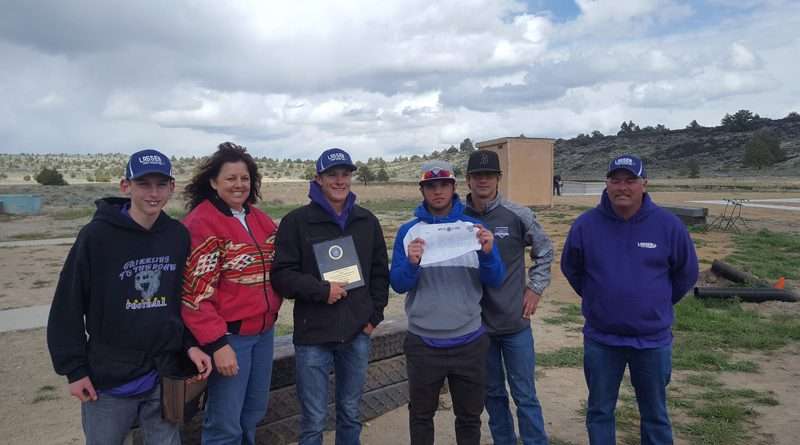 The fundraiser, deemed a grand success by both the Claybreaker’s head coach Phil Giusti and the many participants at the shoot, raised money to help cover the cost of state entry fees for the team.

The event hosted 70 individual shooters divided into 14 teams of five shooters each.

Organizers of the event were Terrie Loflin and Nate Spalding, both parents of current Lassen Grizzly Claybreakers.

Terrie Loflin commented, “The shootout was a great success and everyone had a great time. CHP officers are looking forward to next year’s shootout and Plumas County CHP would like to join in the shoot. It was a great time to see our Lassen Grizzly team members interact with our local law enforcement agencies; I believe it created a special bond with new relationships for everyone.”

To ensure the Claybreakers didn’t have an unfair advantage, Phil Giusti had a specific technique.

Phil Giusti said, “The way I squaded my Grizzlies was I mixed junior varsity and varsity, then I put them in order according to their averages. I had 20 students, so I numbered them in groups of four all the way down the page.

“Then, I randomly drew one person from the top four, then one from the second four and third and fourth and fifth until I had a squad of five. Then I repeated it until I had four evenly mixed squads consisting of top, middle and beginner shooters all on the same squad.

These kids were going to have to work hard to win this event because I wanted it to be fair for the outsiders that don’t get to practice as much as these kids do.”

Phil Giusti later commented, “Also, (the Claybreakers) have not really shot at the 27-yard line, and we don’t practice it because in high school competition, we only shoot at 16-yards.”

After the event had ended, Phil Giusti said, “I was very impressed how all the kids shot at the 27-yard line. I really didn’t expect them to shoot as well as they did.”

With teams of five, the highest possible team score to be shot was 250 targets.

The top team score recorded at the event was a 199 made by one of the four Claybreakers teams.

The second-place team was Lassen Grizzly Alumni with a team score of 191.

Third place was awarded to Sierra Sportsmen with a team score of 189.

Fourth place was earned by a second Lassen Grizzly Claybreakers team with a team score of 186.

Fifth place was a tie between Sierra Sportsmen member Williams and Claybreaker Ingwerson with 43 targets shot.

There was a three-way tie for 13th place between Claybreaker Jewel Kerby, Individuals member Charlie Moore and C.H.P. member Jacob McCallister, as each shooter hit 40 targets.

According to Terrie Loflin, the Annie Oakly shoot was down to the wire against Fish + Game’s Kroll and Claybreaker Kiar. Kroll ended up winning the event.

Terrie Loflin stated, “Everyone had a great time with broken clays followed by tons of smiles and laughter throughout the day. We can’t wait for next year’s event, looking forward to teams returning with possibilities of Plumas County CHP, Forestry Department, Susanville Fire Department, Banner Lassen and more.”

She later continued, “Our community is amazing and the support we received throughout the first Claybreaker shootout helped make it a great success, we couldn’t do it without the community support.”

He said, “I thought the shoot turned out very well. We had tons of law enforcement, people in the community and even alumni from the years past. I thought it was run really smoothly and was organized perfectly thanks to volunteers, Terrie Loflin, and of course the coaches.”

Wyatt Spalding continued, “We all had a great time and I would like to see this become a team tradition. I love the trophy made for first place also competing in Annie Oaklie and losing espically was still a good laugh while

it was lots of fun. I wish I could have one more year of being on the team, I’m going to miss it.”