The Clear Creek Community Services District board of directors met for their regular meeting Jan. 2 to address various topics that pertain to the district, but with an emphasis on whether to proceed with water rate increases.

The small meeting room inside the Clear Creek Fire Hall was packed with community members anxious to find out what the board members had in mind regarding higher water fees, given the number of people in the district living on limited budgets.

Cathy Hunter, board chair and the other board members began a dialogue, asking how much of an increase in water rates was necessary to maintain a workable budget over the course of the next several years.

Public comment was delegated toward the end of the lengthy discussion until the board had a chance to review the district’s infrastructure needs, while considering the implementation of a five-year plan that would directly affect the 166 household connections that make up the water district.

Hunter handed out a packet of information to each of the board members supplied by HF&H Consultants, which among other services provides studies to ensure adequate water funding to safeguard revenue stability. The company produces simple spreadsheet models consolidating the cost for existing facilities and expansion plans, and makes recommendations that the board members could analyze concerning a number of possible rate structures.

The detailed study included a comparison of other districts and the rates they charged to their customers as a reference, including Westwood, Chester and Hamilton Branch, because those communities were similar in size, she said.

Hunter noted that based on the consulting firm’s study a recommendation of a 9 percent increase in water rates would start in the first and second year of an increase, followed by a 5 percent increase for the next three years.

There was broad agreement that an increase was necessary to provide revenue for major capital improvements for water infrastructure by building adequate reserves as a contingency against future catastrophic failures in the system requiring equipment replacement.

Also considered was an additional cost-of-living-index or CPI charge to account for inflation, which has been in the vicinity of two to three percent per year over the past decade.

Because Clear Creek has an antiquated water system that is long past its 40 year lifespan by 25 years, the board discussed a hoped for State Water Board Planning Grant to provide funds toward the Clear Creek Community Service District Water System Improvement Project; but the directors recognized that there was no guarantee that a state grant would be awarded to the district, making raising rates still necessary.

Hunter suggested the board approve a goal of up to at least $110,000 in a capital improvement reserves account accumulated over the next five years.

Also noted was the need for a six-month operational reserve of between $35,000 and $40,000 should the district ever run out of money.

Even these reserves would remain woefully inadequate, Hunter explained, as a new pump station for example would cost in the neighborhood of $534,000 when it is replaced in 25 years. A new water storage tank with a 40-year life expectancy would cost another $588,000, and a newly constructed distribution system could cost as much as $401,000 and last just 30 years.

Based on a recent audit the district is currently operating at break even, without any debt, but that raising enough money for the long term to meet all future obligations will be a challenge, she said.

Also mentioned was that should a catastrophic repair need to be made in the near future before funds were available, the district might have to consider a loan, which would of course include interest payments and place further pressure on the community to pay off the added debt.

One member of the audience lamented that many residents in Clear Creek are living on a limited income like Social Security, and even a modest increase was going to be a considerable hardship on them.

The board concluded with a vote that proposed a rate increase of $3.25 per month for the next two years billed bi-monthly, with another 5 percent each of the following three years.

Once information on higher water assessments and additional updated details is posted in the coming weeks on the district’s website (clearcreekcsd.org), a public hearing will be held April 30 for community feedback before the board makes a determination on the final amount of a rate increase.

In other district news:

Clear Creek Fire Chief John Hunter said that near the end of the month in December there was one structure fire; one traffic collision on Highway 36 and three medical calls.

The department also initiated three regular drills, he noted, and installed fire hydrant poles to provide snowplow drivers site locations of the hydrants should heavy snow cover them up.

Hunter also thanked everyone in the community and his sons for keeping the fire hydrants in town and the perimeter of the firehouse clear of snow.

A firebreak on the east side of town is being cut, and property owners of the parcel behind Clear Creek Drive are also cutting a firebreak so the township will be protected on both sides by the time fire season starts again late next spring.

On a final note, an audience member wanted to know what was going on with the broken siren. Hunter said he didn’t know if it was salvageable but was waiting on an electrician to check it out, adding that it might be better and cheaper to purchase a new siren to be placed on the roof of the station if that was something the community wished to pursue.

According to the district’s water department report by J.D. Hackett, maintenance manager, water samples were good for the month of December.

He also mentioned that some valve and pump components in the water division required replacement, maintenance or needed to be rebuilt; plus two-week warning shut off notices were placed on customers’ doors for delinquent billings.

Water usage for the month of December was approximately 313,000 gallons, he said.

Incumbent Chris Gallagher, Lassen County supervisor District 1, was on hand to provide a brief introduction and remind those in attendance that an election was coming up soon, and that if anyone had any questions or wanted to make any issues known to him that he welcomed calls to his office in Susanville.

Also present was Randy Darrell, running for the same office. He pointing out that voters had a choice in the upcoming election and wanted them to take the time to get to know him, adding that he too was available to contact by individuals wishing to discuss local issues.

Cathy Hunter read over the financials report to the board listing expenditures for December 2019 and payroll for January 2020.

The board members voted unanimously to approve the financials report.

The next Clear Creek Community Services District board of directors meeting is scheduled for Feb. 6 at 6 p.m. 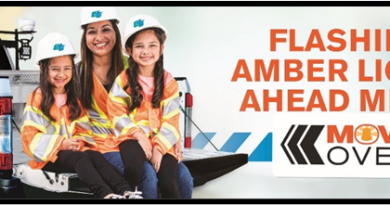 New ‘Kids of Caltrans’ campaign aims to get drivers to move over, save lives

CalFire offers these tips for a safe Thanksgiving

The kitchen is at the heart of every home, especially during the Thanksgiving holiday, and a recipe for success during…