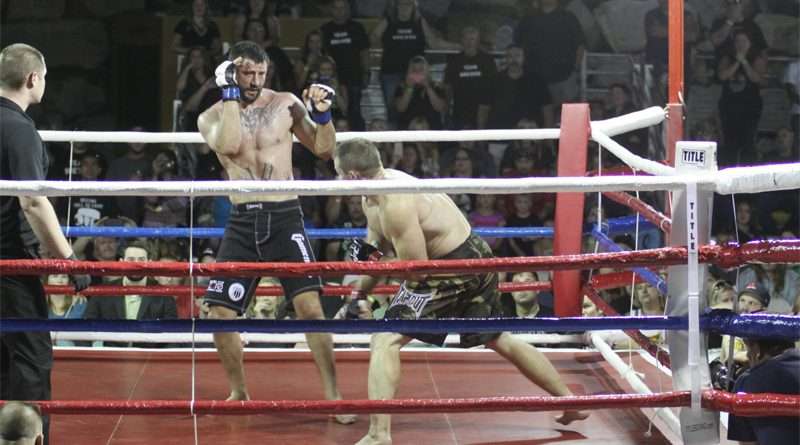 The Diamond Mountain Casino in Susanville hosted the 12th High Desert Brawl of the Arena Wars Total Kombat fighting series. The event saw 10 different fights with the main event being the 200-pound Mixed Martial Arts Super Title Fight between Chad Brewer and Dan Compton, and the co-main event being the 155-pound MMA California Title between Casey Roof and Christian Agosto.

The main event was a fight filled with passion in the arena and throughout the viewing crowd.

In the first round of the fight, Brewer appeared to hold the upper hand.

Brewer showed patience at the fight’s start and kept up the defensive tactics as Compton threw in a few jabs and kicks. However, once given the chance, Brewer lunged and took Compton down.

opponent, Brewer kept his feet on the ground and let the punches flow.

Despite his many attempt to break Compton’s spirits, Brewer eventually hit the ground as Compton’s legs had secured a hold around Brewer’s neck.

With a few movements and a surge of adrenaline, Brewer was back on his feet and managed to lift himself and Compton off of the ground for a brief second before slamming Compton to the ground with Compton’s shoulders and upper back taking most of the impact.

Brewer managed to repeat the action, this time with Compton’s right shoulder taking the brunt of the impact, but it still wasn’t enough to keep Compton down.

Compton then lunged to grab hold of Brewer’s right leg as the second drop caused him to lose the grip his legs had around Brewer’s neck.

From there, Brewer managed to get on top of Compton once again, this time relentlessly delivering punches to the head.

Compton’s attempts to free himself failed multiple times before he was literally saved by the bell that called an end to the first round.

The second round appeared to progress in a similar fashion as the first, with some offensive jabs and kicks by Compton followed by a tackle by Brewer that sent the two to the mat.

However, the round took a turn for the unexpected as Compton managed to gain advantage and ultimately secure Brewer’s arm in such a way that he was left defenseless and ultimately tapped out.

The fight was called with Compton declared the winner of the 200-pound MMA Super Title Fight after 2:58 in the second round.

Despite things looking against him initially, Compton proved that it takes mere moments to change a fight’s outlook.

As for the co-main event, Agosto and local fighter Roof both entered the ring eager to win the 155-pound MMA California Title.

In an earlier edition of the Lassen County Times, it was published that during an interview, Roof declared, “I will choke (Agosto) out. I’ve chocked out everybody else that I’ve fought. This time will be no different.”

Though some might have doubted Roof, no one can deny that he definitely delivered on his promise.

The fight was called with 32 seconds on the clock in the first round, as Roof had won via technical knockout.

In addition to the main and co-main events, the brawl saw three kickboxing matches, four MMA matches and one fight using Muay Thai.

The brawl began with the 170-pound Muay Thai Title between Nathan Adams and Brennan Mishler.

After five three-minute rounds, the fighters joined in the middle of the arena, both still standing and both breathing heavily. The fight was ultimately decided as a win for Mishler via split decision.

Upon earning the title, Mishler commented that the win felt good. He then thanked his family and friends for their support.

The MMA fights then took over the arena with the first match being the 135-pound MMA California Title between Cutis Fields and Randi Monaco.

Fields and Monaco gave a great show in the first five-minute round.

At one point in round one, Fields managed to lift Monaco off of the ground, but his strength appeared to betray him as Monaco was able to plant his feet back on the mat prior to Fields having the chance to take him down.

Fields then tackled Monaco into a corner, but the act alone wasn’t enough to secure the win alone.

Once pinned, Monaco focused himself on defending Fields’ punches. Upon his release of the pin, he then found himself clung onto Fields’ upper body; a fact Fields used to his advantage to take Monaco down once more.

Despite the soreness the two men must have felt by that point, neither one gave up the round. By the end of round one, the fighters returned to their respective corners and attempted to regain their strength for round two.

However, while the break in fighting is a great opportunity to catch one’s breath and rehydrate, it also allows the adrenaline to fade.

With 10 seconds on the clock in round two, Fields was announced the winner by knockout.

For the 145-pound MMA fight, Kyle Moya took on Ryan Koscinski and ultimately left with the win.

The two fighters started out with a few offensive jabs and kicks, but it didn’t take long before Moya was on top of Koscinski with his weight focused on Koscinski’s chest.

Upon realizing there was no way to lock his legs around Moya, Koscinski attempted to roll onto his stomach to gain some sort of advantage. However, instead of getting him into a better position, the move ultimately resulted in his loss.

With 2:15 on the board in the first round, Moya was declared the winner.

Gomez appeared to focus a majority of his strategy on defense, while Hensley wasn’t afraid to take the offensive approach.

Hensley’s first attempt was a kick with his right leg that was ultimately blocked by Gomez.

Gomez then reciprocated with a kick that also failed to make proper contact.

Hensley then attempted to gain momentum for a kick by spinning, but as soon as his back was turned, Gomez went in to secure a hold around Hensley’s chest. With the tight hold, Gomez was able to take Hensley down and ultimately cause him to tap out.

Gomez won the fight with 2:28 on the clock during the first round.

“It all happened so fast. I’m thankful for the team I had with me to prepare. I’m still excited,” Gomez commented. “He made me a better person from that fight. I came in pretty heavy and it was all over so fast.”

Finishing off the MMA fights was local fighter Joey McKerman and Anthony Green for the 135-pound MMA Super Title fight.

The match saw a lot of swift moves with a few strong jabs to the side of the ribcage. Then, McKerman secured a tight hold on Green that sent them lying on the ropes of the arena before turning to hit the ground.

After tapping out with 1:59 on the clock in round one, the men showed the meaning of sportsmanship as Green embraced McKerman and then held his arm up to signify that he accepted the loss at McKerman’s hands.

When asked about how it felt to win a match in his hometown, McKerman said, “You just can’t beat it. It’s awesome.”

McKerman’s fans included his children who consistently cheered for him and held up a sign for him during the fight.

To initiate the kickboxing segment of the night, Kelsey Lane and Diane Hinkley took the arena for the 155-pound female kickboxing match.

With hardly a blink of the eye, Lane managed to win the match by technical knockout with a mere 13 seconds on the clock of the first round.

The fight between the two kickboxers was one of the longest in duration throughout the night as the men fought for a full five rounds.

Once the rounds were completed, both men were drenched in sweat and the enthusiasm seen from fans was nearly uncontrollable, the fight was ultimately given to Moore via unanimous decision.

After earning the title, Moore thanked his fans that occupied nearly a full section of seating throughout the event. He said, “My fans travel six plus hours for every fight. I am so thankful for them. I love them all.”

Despite a few rough hits during the fight, Moore’s win showed the power of dedication as well as the influence of those who support him.

The final kickboxing match of the evening was the heavyweight kickboxing fight between Matt Lively and Justin Griffith.

The match initially looked to be favoring Griffith as some strong swings were seen from his end, but great protective form seen from Lively definitely helped him keep in the fight.

Though Griffith had Lively trapped against the ropes of the arena for a time, using his full strength in each swing was starting to wear on his performance, and Lively seemed to be well aware.

Lively managed to get a jab in that made contact with Griffith’s face, but the act appeared to refuel Griffith as Lively was shoved to the ropes yet again.

After the first two rounds were brought to an end, Lively put away his defensive strategy and took over offense. Strategic swings and smooth ducks and dodges allowed Lively to keep a cool head while Griffith continued to try gulping down air.

Throughout the third round, Lively seemed to chase Griffith in the ring and forced him to keep his guard up at each corner. After three knockdowns, Lively was declared the winner via technical knockout with 1:15 on the clock for round three.

Lively said his main music artist he enjoys listening to prior to and after fights is Johnny Cash.

While the entertainment for the evening came in the form of apparent violence, each fight ended with the competitors acknowledging one another for the great efforts seen on both sides.

The High Desert Brawl is intending to return to the Diamond Mountain Casino in 2018.