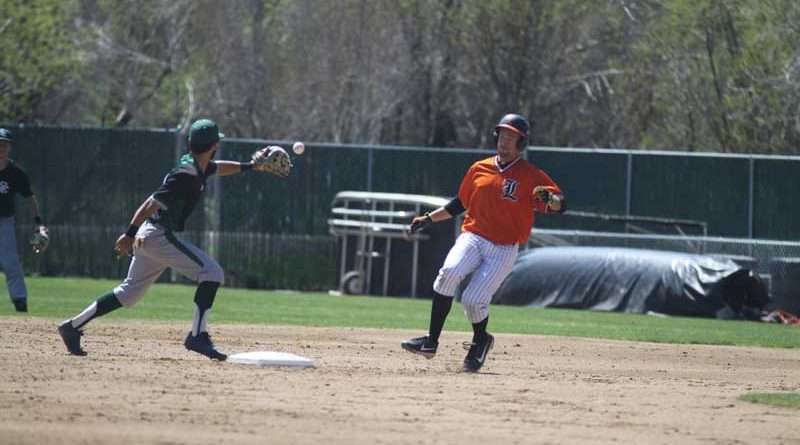 The Lassen Community College baseball team certainly knocked the Shasta Knights out of the park with three wins between the away game Friday, April 13 and the doubleheader Saturday, April 14.

Head coach Frank Avilla said, “We played really well and put all three phases of the game together: Pitching, defense and offense. Anytime you have the chance to play meaningful games in the last two weeks of your season, you put yourself in the position to accomplish some of your season goals.”

Lassen started out on the foreign diamond with the Knights carrying the home field advantage April 13.

However, the Shasta grass and dirt proved to be no additional challenge for Lassen and the Cougar men ultimately managed to leave the field with the 5-2 win.

Connor Fleharty started on the mound for Lassen and pitched a solid seven innings. Jack Bell then took over as pitcher for the final two.

The Cougars weren’t looking so hot initially as the Knights were first to impact the board with two runs in the second inning, but Lassen had at least five innings remaining, and they were sure to use them.

In the top of the fifth inning, Luke Smith singled and advanced to second from a walk by Robert Lujan.

Lincoln Turner was next up to bat and hit a strong triple that sent both Smith and Lujan home.

Mitchell Menns followed with a sacrifice fly to center field that allowed Turner to sprint home, and with three runs on the board for the Cougars, the top of the inning was called.

The Knights, rather dissatisfied with the sudden turn in events, failed to respond during the bottom of the fifth, as a double play and a pop up to shortstop sent them back to the field.

Innings six, seven and eight were dry for both teams, but with the threat of the final inning looming over them, the Cougars produced another two innings in the ninth inning.

Eric Carlson singled to start the ninth inning with a hit, and Smith followed with a triple that sent Carlson home.

Turner then took it upon himself to bring Smith home and did just that with a single.

Though Turner didn’t find his way home before a double play sent him and the rest of the orange and black team to the field, the Cougars finished the top of the ninth with a 5-2 lead.

During the bottom of the ninth, the Knights solidified the 5-2 final score with two strikeouts, two hits and a fly ball to right field.

With one win under their belts, the Lassen team then returned home and brought the Knights along with them for a rematch April 14.

Though the Knights stepped on the Cougar field eager to reestablish their dominance, the Cougars wouldn’t allow Shasta to complete such a task. Lassen ultimately won the game 4-3.

Another slow start gave the Knights hope, as the score remained a 0-0 tie until the fifth inning. However, unlike the first game, the Knights were not the ones to break the scoreless tie.

During the bottom of the fifth, Lassen made one run to secure a slight lead.

Turner singled and advanced to second base on Menns’ single. He then advanced to third on an error by the pitcher, and after Aiden Leahy struck out swinging, Jordan Dicus made a sacrifice hit to first base that allowed Turner to sprint home.

With the ice finally broken on the board, the Knights were quick to retaliate with one run made during the top of the sixth inning.

However, the Cougars kept themselves one step ahead with another run scored in the bottom of the sixth.

Carlson singled to start the sixth on a positive note and advanced to second on a wild pitch with Lujan at bat. Then, Lujan singled and Carlson ran in to bring the orange and black team back on top with a score of 2-1.

Rather disgruntled, the Knights vowed vengeance and followed through with two runs scored during the top of the seventh to take the lead.

The Cougars responded with one hit during the bottom of the seventh and thus allowed the inning to end with the Knights in the lead 3-2.

However, the game was yet to end.

In the top of the eighth, Bell stepped on the mound and struck out two with an error by the Cougar shortstop allowing the only running Knight to reach.

Lassen, on the other hand, was in great form upon stepping up to the plate once again.

Sami Baig reached first after being hit by the pitch and advanced to second via a walk from Carlson.

Then, Lujan singled to send Baig sprinting home and Carlson to second base.

Menns stepped up to bat and singled to load the bases, and a single from Leahy allowed Carlson to return home.

The two-run Cougar inning allowed the orange and black team to take the lead 4-3, and with only one hit from the Knights in the top of the ninth and three Knights who struck out looking, the game was called in Cougar favor.

Continuing on their winning streak, the Cougars decided to end the series with a shutout win of 7-0 during the second game of the April 14 doubleheader.

Tony Goodman took the first eight innings on the mound for the Cougars during the second game of the doubleheader, and Michael Wood acted as relief for inning nine.

Lassen was truly playing at the top of their game during the final match of the series.

The Cougars started off strong in the third inning with a total of four runs scored.

Baig singled to start the bottom of the third off with a solid step in the right direction, and a home run hit by Ryan Thomasy sent both Cougars around the diamond and back home.

Carlson then followed with a single of his own, and a home run hit by Lujan allowed two more runs to be scored before the third out was called.

The Knights were unable to properly respond to Lassen’s success, though a slight effort was present as the Knights managed two hits between the fourth and sixth inning.

During the bottom of the sixth, the Cougars did more than merely hit.

Smith walked to start, but was later tagged out via fielder’s choice that allowed Baig to reach first.

Baig then failed a pickoff attempt and ended up advancing to second on an error by the Shasta pitcher.

Leahy singled and allowed Baig to sprint to third, and while Leahy attempted to steal second, Baig stole home and brought in another run for the Cougars just before Leahy was caught.

One Cougar error allowed a Knight to reach first during the top of the seventh, but the Shasta success ended there.

During the bottom of the seventh, Thomasy singled and stole second. Carlson then walked, and a double from Lujan sent both Thomasy and Carlson home to bring the score to 7-0 in Cougar favor.

With a seven-point lead, the Cougars let up offensively for the remainder of the game.

The final score of 7-0 allowed the Cougars to end the series undefeated.