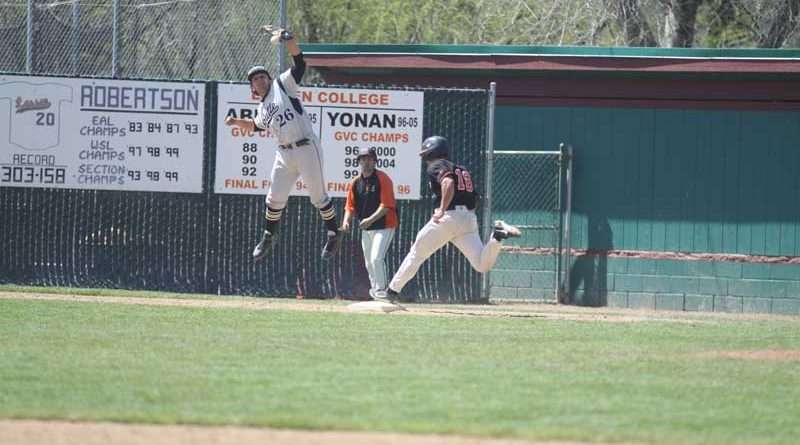 Comeback success stories are impossible to achieve without the initial bump in the road keeping things interesting. Thus, despite both losses seen Sunday, April 8 from the Lassen Community College baseball team against Butte, the win on Monday, April 9 was all the more reason to celebrate.

The Butte Roadrunners started the Cougar home series off with a pair of wins as the final scores from the Sunday doubleheader were 13-2 and 9-8, respectively.

However, the Cougars were far from raising the white flag.

On Monday, the Cougars had rediscovered their groove and thus took the 8-4 win with ease.

Cougar head coach Frank Avilla said, “We played poorly in the doubleheader. We didn’t do enough of the little things to get the desired result. However, we did a good job bouncing back the next day with a little more character and a little more heart.”

During the first game on Sunday, the Cougars had a total of six hits and two runs.

The teams were fairly well matched for the first three innings as neither the Cougars nor the Roadrunners managed to find themselves on the board until the fourth.

During the top of the fourth, the Roadrunners scored 10 runs out of nowhere and properly left the Cougars in shock and awe.

The Roadrunners followed with another run during the fifth, and the Cougars were unable to respond until inning six.

During the bottom of the sixth, Sami Baig walked and Ralph Bejarano followed with a single to right field, from which Baig advanced to second.

Then, Aiden Leahy hit a sacrifice that resulted in a fielder’s choice to pitcher, thus sending him back to the dugout and both Baig and Bejarano to the third and second base, respectively.

Ray Guerrero then grounded into a double play that send both him and Leahy out, but Baig took the opportunity to score and thus earned the first Cougar run of the game.

The Roadrunners remained at 11 runs as the top of the seventh proved run-less, but the Cougars managed to bring in one during the bottom of the seventh regardless.

During the bottom of the seventh inning, Luke Smith hit a home run to earn the second run of the game for the home team.

During the top of the sixth, the Roadrunners brought in another two runs to bring the final score to 13-2.

Lassen then challenged Butte to the second game of the day, of which the score was much closer by the end of the game.

Lassen again lost to the Roadrunners, but the close final score of 9-8 proved that the Cougars were back in the game, both offensively and defensively.

Lassen started off with the upper hand as the first inning was called with a 3-0 Cougar score on the board.

Ryan Thomasy singled to center field to start the Cougars off in the first inning, and a single to left field by Jordan Taylor sent Thomasy to second.

Eric Carlson doubled to left center next and managed to bring both Thomasy and Taylor in.

Smith then singled to right field to send Carlson to third, and a sacrifice fly from Robert Lujan brought Carlson in.

Butte was quick to tie things up during the top of the second with three runs; they then stole the lead with four runs in the top of the fourth to bring the score to 7-3 in their favor.

Without a proper response from the Cougars, the Roadrunners then scored another two during the top of the seventh.

The bottom of the seventh, though, was much more successful for the Cougars as Lassen ended the inning with another three runs on their side of the board.

Thomasy started off with a double to left field, and a home run by Taylor followed to add two runs to the Cougar score.

Carlson was then hit by the pitch to reach first base, and Smith followed with a double down the first base line to send Carlson to third.

Finally, Lujan was back at the bat and grounded out to shortstop to bring Carlson in and end the inning with the Cougars up to six runs in total.

Neither Butte nor Lassen made a run in the eighth, but Lassen came back with a strong punch during the bottom of the ninth with two runs scored.

However, Lujan hit a home run to send both he and Taylor home. Thus, the Lassen tally hit eight runs prior to the game’s end.

Though the final two runs weren’t enough to steal the lead, Cougar fans knew they could expect a lot from the home team come Monday.

And the Cougars certainly delivered.

The Monday game against the Butte Roadrunners had a satisfying final score of 8-4, Cougars.

Lassen was first to impact the board with a run in the second inning.

Lincoln Turner was first on the base with a bunt sending him to first.

Mitchell Menns stepped up to the plate next and doubled to right center, thus allowing Turner to round second and third before heading home.

The Roadrunners responded with a pair of runs in the third inning to steal the lead, but Lassen stole it right back with three runs during the bottom of the fourth.

Lujan singled to the pitcher to start things off in the fourth inning.

Then, Smith doubled to right center and advanced to third on the throw, thus allowing Lujan to sprint back home.

Turner was up to bat yet again and doubled to center field to bring Smith in. Menns sacrificed to the pitcher to send Turner to third, and another sacrifice from Leahy send turner home.

Fully aware of the Roadrunners’ sudden ability to turn the tables, Lassen continued to up their lead with another run in the fifth inning.

During the bottom of the fifth, Thomasy doubled to left field and Taylor followed with a double to center field that sent Thomasy home.

The Roadrunners finally responded during the top of the seventh, in which they brought in two runs, but the Cougars were still ahead 5-4 by the end of the inning.

During the bottom of the eighth, the Cougars finished things off with another three runs to ensure the win was clean and fair.

Smith walked and was then able to advance to third from Turner’s double.

Menns followed with a double of his own that sent both Smith and Turner in, and after a sacrifice from Leahy and a sacrifice fly from Dicus, Menns made his way home as well.

A run-less top of the ninth brought the game to an end and allowed the Cougars to finish the series with a win.

The Cougars then took on the Shasta Knights Friday, April 13 at the Shasta diamond and Saturday, April 14 at home. The results will be published in the Tuesday, April 24 issue.