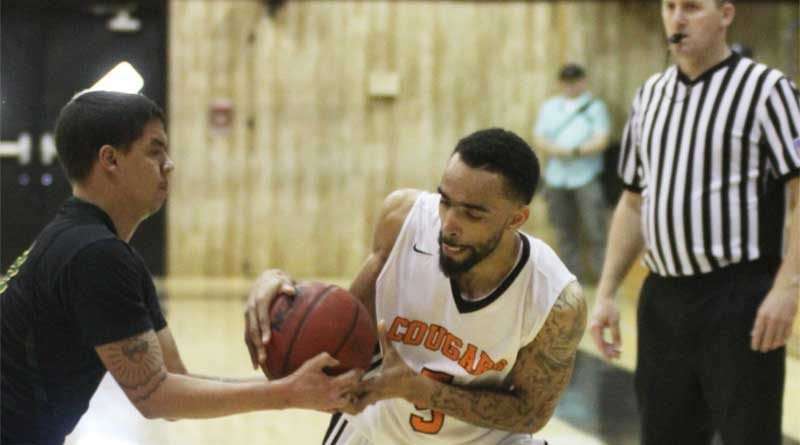 Lassen certainly showed intensity on the court and worked hard to keep the ball moving, but ultimately the spot-on shots seen from the Golden Eagles outweighed any and all effort put forth by the Cougars.

The final score of 92-63, Golden Eagles, proved just how talented the visiting team was.

Though the Cougars ultimately lost the game, Lassen started off on the right foot with a basket by Kameron Brandon breaking the initial 0-0 score.

DeMario Newman followed Brandon with a two-point field goal from beneath the basket less than 20 seconds later, but the four-point Lassen lead proved to wake the Golden Eagles up right quick.

Feather River hit two baskets back-to-back to tie up the score by the start of the fourth minute. Then, after a couple missed free throws from Lassen, the Golden Eagles continued their scoring streak with another two baskets to gain their own four-point lead.

Newman interrupted the Golden Eagle scoring with a hook shot with 14 minutes and 41 seconds remaining of the first half, but Feather River swiftly responded with a basket to negate Cougar efforts.

Brandon hit a hook shot as well with less than 13 and a half minutes on the clock.

Feather River scored the first three-pointer of the game at 12:33, and after another hook shot from Brandon, the Golden Eagles repeated their success.

Unwana Ekiko shot the first good Lassen three-pointer with 11:04 remaining of the half. Then, after a Feather River basket, Max Denham stepped up to the free throw line to bring the Cougars to 14 points as opposed to Feather River’s 18.

The Golden Eagles initiated another scoring streak once the first half was halfway over. By the time the clock had dwindled down to 8:30, the Golden Eagles upped their score by six points.

After being fouled from the three-point line, Chailen August took his spot at the free throw line and brought in another two Cougar points by the start of minute 13.

Feather River hit two good free throws at 7:38 and then decided the best course of action was to show off with a dunk at 7:17.

Denham scored a three-pointer at 6:58, but the Golden Eagles were eager to respond with three baskets, including a dunk, during the 58 seconds remaining of the minute.

Newman brought in five points for the Cougars between a three-pointer at 5:50 and a rebound at 5:09.

Feather River then brought the score to 40-35 in their favor, but they didn’t hesitate to make a technical foul against Ekiko, thus giving the Cougar two free throws, both of which were successful.

Ekiko later had another two good shots at the free throw line, but not before Feather River earned an additional four points.

With 2:10 on the clock, the Golden Eagles upped their lead even further with a three-pointer, but the remainder of the half would remain basketless for both teams.

Down by 20 points, the Cougars were determined to pick up the game in the second half.

Ekiko gave the men a great start with a basket 11 seconds into the half. Then, after the Golden Eagles scored a basket, Ekiko was back in the spotlight with a three-pointer.

Feather River hit another two-point field goal with 18:43 remaining of the game, but Brandon was quick to follow with a layup after a jump ball was called.

The Golden Eagles advanced their score by five points courtesy of a basket and a three-pointer, but by 17:10, Brandon shot another basket to bring the second-half scoring to a 9-9 tie.

Xavier Lovelace responded with a layup 23 seconds later and Newman backed him up with a three-pointer before Feather River had a chance to counter.

Another seven points were gained by the Golden Eagles by 14:30, but at 14:24, Denham scored a three-pointer to bring the black and orange point tally to 44.

With 13:46 on the clock, Lassen decided to do a little showing off of their own. Denham gave a strong pass from behind the three-point circle and Lovelace caught the ball and dunked it to set the crowd ablaze with cheers.

Feather River responded with a two-point field goal, but the presentation needed work.

Ekiko reentered the court just in time for a basket at 12:54.

Another five points were awarded to the Golden Eagles, but the Cougars refused to cease their passion on the court.

Ekiko hit a basket from the top of the key at 7:15 and Lovelace followed with a swift hook shot soon afterward.

Then, at 6:05 Brandon scored a two-point field goal for the Cougars and Ekiko was quick to support with a basket at 5:28.

The final four minutes of the game were jam packed with free throws for each side. In addition to the many moments spent behind the free throw line, fans also saw some quick Cougar action. After a couple good free throws, Rikkert De Maertelaere shot and made a three-pointer to bring his contribution up to five points.

Later, Kareem Johnson made a name for himself on the court with a two-point field goal.

Though the final score of 92-63, Feather River, did not reflect the best performance from Lassen, fans present at the game were able to witness first-hand just how hard the men worked from start to finish.