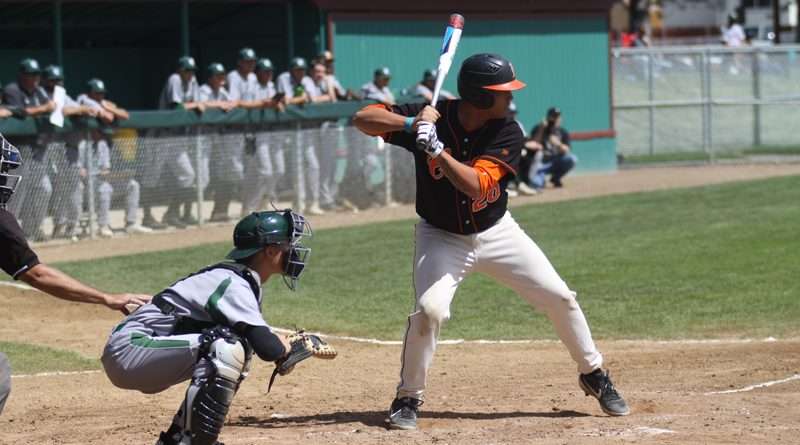 The Lassen Community College Cougars baseball team dueled Shasta first in a solo away game, then the Cougars brought the Knights to Frank Ernaga Field for a doubleheader.

In the away game at Shasta Friday, April 12, the Cougars fell 5-2, but once the Knights hit Lassen soil it was over. The Cougars came out victorious over Shasta 9-6 in the first game and topped them again 10-3 in the second.

Game 1: Lassen vs. Shasta
The Cougars started their bout against Shasta away on Shasta’s home turf, with Gabriel Rojas as starting pitcher for the Cougars.
Rojas allowed 10 hits, four runs, four errors, and recorded three strike outs. Colby Zemp pitched in relief for an inning and an out, allowing two hits, one run and one error.

Layne Thacker followed in relief, pitching as long as Zemp, with only one hit against him, no runs, and no errors. Finishing pitcher for the Cougars was Zachary Madrigal, who allowed two hits, but no runs.

The first inning kicked off with Cougars putting up their first three outs in the top of the inning leading into the bottom in which Shasta was able to get a single run leading 1-0 out of the first inning.

Cougars were finally able to respond in the fifth inning, as Nathan Knowles started for the Cougars in the top of the inning with a big hit to center field with a double.

With Knowles on second, next was Donovan Gonzalez who grounded out to third, but allowed Knowles to advance to third.
Caleb Ariaz then stepped up to the plate with a single to right field, for an RBI bringing Knowles home tying the game 1-1.

But the Cougars would garner their next two outs in quick succession.

Shasta took charge in the bottom of the inning with Rojas unable to get around their hitters, allowing two runs before Zemp would come in to relieve him.

Even Zemp had troubles with Shasta able to get one more runner to home, allowing Shasta to take a 4-1 lead in the bottom of the fifth.

In the sixth inning, the Cougars were able to get a runner on base but were unable to make a play for a run.

But Shasta continued their push, getting a hit and a walk off of Zemp before Thacker came to relieve him. Thacker, however, would get a hit and one run against him before the end of the inning for Shasta to then lead 5-1.

The Cougars attempted to rally in the top of the seventh inning; Knowles kicked things off but was struck out swinging, but Gonzalez singled one to right field.

Ariaz followed but grounded out to third base, which allowed Gonzalez to reach second. Nate Morgan then hit the plate with a pop up in the infield, which appeared as an easy out for Shasta, but an error on Shasta would put Morgan on first with an RBI bringing Gonzalez home.

Justin Geyer would end the inning for the Cougars, popping one up for Shasta shortstop to give the Cougars their third out for the inning.

The Cougars couldn’t get anything going in the two following innings giving Shasta a 5-2 win over the Cougars.

Knowles led the Cougars in hitting with two hits, and one run, and Ariaz got a solo hit along with one RBI.

Game 2: Lassen vs. Shasta
In the follow up to the Friday game, the Cougars came home with the Shasta Knights in tow Saturday, April 13.

The Cougars started with Marlin Brucato on the mound, who would allow eight hits, three runs, one walk and four strikeouts.
The Cougars were able to get things moving in the bottom of the second inning, with Morgan starting things off with a base hit, then while leading off first the Shasta pitcher failed to pick off Morgan which resulted in a wild throw giving Morgan the opportunity to advance to second base.

A second error on a pick off play would allow him to then advance to third base.

Knowles was next at the plate but was struck out. Then Mateo Martinez stepped up just to be pelted in the leg by the Shasta pitcher, leading Martinez to first base.

Gonzalez stepped up next, but a wild pitch by Shasta would give Morgan the opportunity to run home, where the Shasta catcher looked to rely on the pitcher, but they ended just tossing the ball over Morgan, allowing him to score, putting the Cougars at 1-0.

Gonzalez would be struck out along with his follow up Cade Kissel.
Heading into the top of the fourth inning, Shasta didn’t waste time getting a homer off of Brucato to tie the game. Shasta finished the inning with back-to-back-to-back outs.

Knowles started the bottom of the fourth with a pop up to shortstop for the Cougars’ first out of the inning.

Martinez was then up, but was hit by a pitch for the second time in the game that landed him on first.

Following him was Thacker, who hit a single to reach first, advancing Martinez to second base. Kissel then stepped up but a pitch hit him, loading the bases for the Cougars.

Shasta then brought in relief to bring their pitching in line, but they would walk next at bat for the Cougars’ Lincoln Turner. This would bring Martinez back home for their first run of the inning.
Aiden Leahy then stepped up with a single for an RBI, bringing Thacker across home plate. Geyer was then at bat, while Leahy took the opportunity to steal second.

After Leahy stole second, Geyer smacked the ball out of the park for a three-run home run for the Cougars, giving the Cougars a 6-1 lead in the bottom of the fourth inning.

Last up was Brucato, who ended up popping it up in the infield for the Shasta shortstop.

It wouldn’t be until the sixth inning that Shasta would manage a response with a solo home run to start the inning, but they would end it with another run putting themselves at 6-3, trailing the Cougars.

The Cougars were then up to bat, where Thacker would start things off, but he ended up smacking a line drive to center field for Shasta to make an easy out.

Then Kissel reached first on an error by Shasta’s third baseman. Turner was then up with a big double out to right field, bringing Kissel around for a run.

The Cougars then had Leahy step up where he would land a single advancing Turner to third base, then Cougar slugger Geyer was up where he singled out to right field for two RBIs, bringing Leahy and Turner home.

Cougars Brucato and Morgan would land their next two outs, quickly following Geyer, ending the inning for the Cougars.

Going into the top of the ninth inning, Shasta managed just two more runs but not enough to make up the difference the Cougars had established. This led the Cougars to a 9-6 victory over Shasta at home in the first game of the doubleheader.

Game 3: Lassen vs. Shasta
Just minutes after the first game, the Cougars sent Cameron Allison to the mound as starter where he would allow nine hits, three runs, two walks, a single home run and he garnered six strike outs.

Coldin Shopp was playing in relief for two innings. He allowed one hit, one walk, and recorded two strike outs.

First two innings went by as a trade of pitching and swinging with only a single hit between both innings.

Leahy was then up to bat, but on the second pitch, Turner took the opportunity to steal second base, but Leahy would drive the ball out to center field only to be picked off for the Cougars first out of the inning.

Then Geyer, who recorded a big home run in the game before, mimicked his performance in the second, getting another beautiful hit to send over the fence for the Cougars’ second home run of the day.

The home run by Geyer would cement down two runs taking the lead over Shasta. Then Knowles was up, but on a four-ball count he was walked to first.

Morgan then stepped up, but grounded out to Shasta’s pitcher that allowed Knowles to advance to second.

Brucato was next up where he put a big hit away for a double out in right field bringing Knowles around for an RBI, Thacker followed with a single hit of his own advancing Brucato to third.
Then Ariaz was up with a single down the left field line, bringing Brucato home for the Cougars’ last run of the inning, leading 4-1 over Shasta.

The fourth inning followed the third in a similar manner, with Shasta garnering one more run in the top of the inning, and the Cougars recording four, including a double by Thacker, bringing three runners home.

Shasta recorded their last run in the top of the sixth, but the Cougars finished the game in the bottom of the eighth with Turner hitting a single for a two-run score.

The Cougars overcame the loss on the road for two wins from outstanding performances on the field, from Geyers’ two home runs to Turner’s accuracy in hitting.

The results were unavailable at press time but look for the results in the Tuesday, April 30 issue of the Lassen County Times.