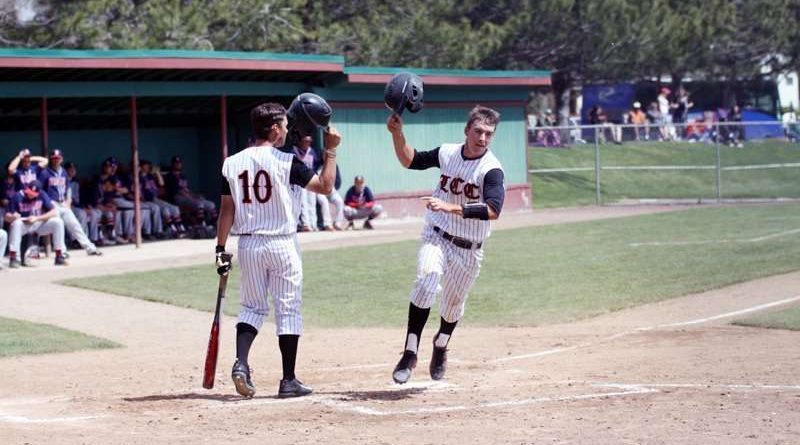 McClain O’Connor, right, is congradulated by Ryan Thomasy after hitting a home run on April 22. Photo by Ashley Grogan
Sports
May 2, 2017May 3, 2017 Staff

The Lassen College baseball team showed no mercy against the College of the Siskiyous Eagles over the April 22 weekend.

On April 22 and 23, the Cougars hosted and won a total of three games against the Eagles.

The first game was an overwhelming show that ultimately ended with a 10-1 score favoring Lassen. Game two followed close behind with a final score of 10-0, again favoring Lassen.

The sole game played on April 23 was again a massacre against the Eagles as the final score was 16-3.

In game one, the Cougars took action to quickly establish dominance. By the end of the first period, Lassen had secured the 3-0 lead.

The Cougars continued their road to success with a run scored in the second inning and two more scored in inning five.

The first inning runs were made by Ryan Thomasy and McClain O’Connor after a double was hit by Adam Frandsen.

Frandsen then scored the third run of the inning after the Eagles’ catcher made a throwing error.

In the second inning, O’Connor couldn’t contain himself and ended up hitting a homerun and sprinting around the bases as the fans cheered.

During the bottom of the fifth, Kevin Montgomery doubled and then advanced to third on a throwing error by the Eagle shortstop. Montgomery was thus credited with two RBIs: Daniel Perry and Eric Carlson.

Thomasy grounded out to the shortstop in the sixth inning and set O’Connor to second base and Nathan Hedberg home.

Frandsen was then up to bat and hit a homerun to bring O’Connor and himself in. Perry followed with a double and brought Carlson in to give Lassen their final score for the game.

Pitching for the first game was Raymond Kerr, Michael Wood and Brenden Yocum.

Kerr spent the first five innings on the mound and gave away five hits, one run, three walks and on error. He struck out eight of 28 batters faced before handing off the ball to Wood.

Wood followed with only one hit given of the four batters faced.

Yocum finished off the game on the mound and pitched to three Eagles.

After a brief break, the Cougars reentered the field to face the Eagles for round two.

The second game of the doubleheader on April 22 truly drove the crowd crazy. Lassen made their first run during the bottom of the first inning, but the Cougars let the score stay at 1-0 until inning six rolled around.

The sixth inning brought another three runs in for Lassen, but the overwhelming success wasn’t seen until inning eight. During the last inning of the game, Lassen brought in six runs to total their score at 10 points.

The first Cougar point was made by Thomasy thanks to a sacrifice fly hit by Perry to the right field.

The three runs scored in the sixth inning were made by O’Connor, Frandsen and Carlson. Carlson, Kiessling and Montgomery were credited the RBIs.

Alex Valencia was first to bring in runs for the eighth inning with his single that sent Jordan Dicus to second and both Perry and Carlson home.

Hedberg was next to bat and singled to send Valencia to second and Dicus back home.

Frandsen brought in the final three points, though, as he hit an overwhelming triple that sent O’Connor, Hedberg and Valencia home.

Gehrig Parks pitched a complete eight innings and was named the winning pitcher of the game. He gave away four hit and one walk. He also struck out five of 26 batters faced.

After two humiliating losses, the Eagles were expected to fly home with a white flag waving in their talons. However, they defied expectations and proudly made their way back onto the diamond on April 23 to face the Cougars once more.

While the Cougars admired the pride seen from the Eagles’ actions, Lassen couldn’t help but destroy the Eagle dreams once more.

The Cougars scored 13 runs in the first two innings with ease.

The Eagles surprised all in the fourth inning as they brought in three runs. However, the Cougars quickly countered with three runs scored between the fifth and sixth innings to total out their point tally at 16.

In the first inning, Carlson was credited with an RBI after his walk allowed Frandsen to advance to second, Thomasy to third and O’Connor home.

Perry was next to bat and hit a double to bring in both Thomasy and Frandsen while Carlson advanced to third.

Montgomery followed with anther double to bring in both Carlson and Perry as Hedberg moved to third.

Finally, Valencia doubled and allowed both Hedberg and Montgomery to score.

Lassen entered the bottom of the second inning still up by seven and only interested in raising the number.

Montgomery singled to bring in Carlson as Perry advanced to third and Hedberg to second.

Quinton Smith walked to bring Perry in for Lassen’s ninth point of the game, while Hedberg advanced to third and Montgomery to second.

O’Connor followed with a walk as well to send the boys up a base and bring Hedberg in.

Thomasy finished off the inning with a double to bring in Montgomery, Smith and O’Connor.

The next Cougar score didn’t occur until the fifth inning when Hedberg singled to bring Perry in.

The final two runs were made by Zach Schmidt and Carlson thanks to Perry and Hedberg, respectively.

Connor Flaharty climbed the mound and pitched for four innings. He gave up seven hits, three runs, one walk and three errors. He also struck out five of 19 faced batters.

Jacob Conklin was named winning pitcher after two innings on the mound with two hits given away and four strikeouts recorded out of the eight batters faced.

Jack Bell pitched two innings with only one ball given up and two of six batters struck out.

Hedberg was on the mound for one inning and struck out one of three batters faced.