Lassen County’s Board of Supervisors wants to finally resolve the Hayden Hill Gold Mine transmission line controversy that’s been a bone of contention for more than a decade and spawned two lengthy and expensive lawsuits.

Before it was installed, the supervisors waived some environmental reviews of the power line, intended to serve the gold mine alone, on the condition the line would be removed once the mine closed. The operator, Lassen Gold Mining, Inc., put up more than $3 million with the county, including a remaining $500,000 letter of credit, to ensure its compliance. The mine closed in 2005, and LGM put the reclamation process out to bid. They received bids of $38,000 and $208,010 and planned to pull the line down as required in the spring of 2008.

LMUD purchased the line for $65,000 in December 2007 after the publicly owned utility district threatened LGM it would claim the line through imminent domain if the mining company would not sell it. As part of the purchase agreement, LMUD also assumed the reclamation responsibilities, but today the line still remains.

Richard Egan, the county’s administrative officer, wrote a letter to Bud Bowden, president of the Lassen Municipal Utility District board on Nov. 8 asking LMUD to “comply with the approved reclamation plan by commencing with power line removal and provide a proposed completion date,” or “provide LMUD’s legally supportable alternative plan to obtain changes in the requirement for removal, for board consideration” by March 2020.

Egan said an item on the Tuesday, Dec. 10 Lassen County Board of Supervisors’ agenda, if approved, will release the $500,000 letter of credit LGM put up to secure the removal of the power line and other mitigations as agreed to when the line was put in. In 2018 LMUD acknowledged it purchased the power line in 2007 and thereby also assumed the obligation to fulfill the reclamation plan.

Despite those assurances, Egan remains unsure of LMUD’s compliance with the plan.

“There are two legal financial instruments in place for the removal of that line — one is LMUD’s financial assurance, and one is this bond (from LGM),” Egan said. “LMUD, by virtue of all their actions and resolutions, now acknowledge their obligation to remove that line and posted the proper financial assurance. I’d rather have duplicate financial assurances because I’m not confident LMUD is going to do what they’re obligated to do, but the law just doesn’t support that.”

Egan said LMUD purchased the line, and that may have been a mistake by their general manager, “but ever since then they’ve just doubled down on that bad decision and compounded it to the tune of I don’t know how much money they’ve spent now. How much more ratepayer money are they going to spend before they actually take it out?”

“We’re trying to make the best of a bad situation,” said Doug Smith, LMUD’s general manager. “We intend to respond to the county’s letter.”

Egan said LMUD has not deposited any funds with the county.

“What they did requires an annual appropriation (in their budget). They appropriate funds in an equal amount to what their analysis is of the cost of removing it, which is now right at a million dollars. That will go up every year, I’m sure.”

“It’s actually a budget set aside, so we’ve earmarked it as a board-restricted reserve account so the county could release the bond being held by LGM,” Smith said. “They needed someone else to put up the financial assurance the line would be removed if that was required.”

“I leave this case with a real bad taste in my mouth for LMUD,” said attorney Chris Wicker, of Woodburn and Wedge, the Reno, Nevada law firm representing LGM. “I’m not commenting on Downey Brand, the law firm that represented them, I’m commenting on LMUD … To me it’s unbelievable that a governmental entity would behave the way LMUD has behaved in this case … The fees they’ve paid and what they have to pay now, it’s been a huge debacle for them. Their ratepayer base is fairly small. What a tragedy … I don’t know what it’s going to cost them to remove the line, but had they complied with the contract back in the day, it would have been a lot cheaper than it’s going to be now.”

According to Smith, “We’d rather not spend $1 million of the ratepayers’ money to remove the line, but ultimately it’s the county’s decision whether it stays or whether it comes out. We can make a good case there’s a public benefit in having the line remain. We’ve talked with a CEQA expert who had the opinion there will be more environmental damage to take it out than leave it in. It’s been in place for 20 years.”

“They can’t just tear it out and leave a mess,” Egan said. “The removal has to be done in a fashion that doesn’t destroy the environment. I guess they’ll need to mitigate that damage as well.”

And Smith revealed the fate of the $30,000 homeowners in the Surprise Valley paid LMUD around the time of the purchase hoping to obtain power from the line — it was applied to the purchase price.

“At one point we attempted to return that money, but we didn’t have any records of who put in what, who to give the money back to,” Smith said. “The gentleman who wrote the check has passed away, and no one was able to provide us with any kind of record. Frankly, they’ve told us they don’t want the money back, they want the power over the power line.”

And despite the county’s insistence the line come out, Smith suggests there still may be a viable use for it.

“We can’t serve customers over that line, but I have had three, maybe four conversations with the manager of Surprise Valley Electric, and they’re interested in taking over the line and providing service to those customers,” Smith said. “There are some people up there who want power who could be served by that line, so to us, it makes the most sense for the line to stay in place.”

In December 2007, after the mine’s closure in 2005, Frank Cady. LMUD’s general manager, purchased the power line for $65,000. The check for the purchase was signed by Cady and Fred Nagel, who was then an LMUD board member and the district’s treasurer, and the LMUD board ratified the check register that included the check at a subsequent meeting.

According to the court file in the case, the check also was stamped by Bill Stewart, then LMUD’s controller, “certifying the check was a legitimate claim against the district.”

“I’ve seen the evidence of the meetings when it was discussed and talked about, so that’s just total (expletive) that he (Cady) went rogue,” said Wicker, “but after he was gone, they tried to get out of it, and it’s cost LMUD hundreds of thousands of dollars.”

In 2009, a year before LMUD filed a lawsuit against LGM, Ray Luhring, former general manager, wrote in a notice of exemption, “The district shall acquire from Lassen Gold Mining, Inc. the right, title and interest to the Hayden Hill 69kV electric power transmission line without incurring the obligation to remove said transmission line as required by the Conditional Use Permit and Reclamation Plan pertaining to Lassen Gold Mining, Inc.’s mining operations. The district proposes to leave the existing transmission line in place, unenergized, for possible future use and to prevent the economic waste of removal. Ratepayers are the beneficiaries.”

Reportedly there was no oppostition to that notice of exemption.

In December 2010, LMUD sued LGM seeking to void the purchase agreement, alleging Cady bought the transmission line without the board’s approval. On March 10, 2016 — after more than five years in court — LMUD asked the court to dismiss the lawsuit with prejudice — meaning it cannot be filed again — just before it went to trial based upon the exemption.

“We got exactly what we asked for,” said Eugene Chittock, LMUD’s general counsel, regarding the dismissal. “The situation at the time that (the lawsuit) was filed was much different in that there was some serious threat of removal (of the power line) that resulted in large exposure to LMUD. We believe those issues are resolved now.”

He also said the district had a good case against the gold mining company, “and I think we would have prevailed, but since the situation changed (because of the unopposed exemption), there was no reason to spend another couple hundred thousand on litigation to get a result that wouldn’t have changed anything … because of our categorical exemption, we believe we’re no longer required to remove it.”

During depositions for that lawsuit, Cady explained how the board approved the purchase.

“In essence, the board gave me the authority to sign the agreement and proceed as soon as I felt all the conditions precedent were in place,” Cady testified. “A motion can be done as simply as without objection we will do the following. If anybody objects, then you go through a formal motion. If nobody objects, that is the motion, second and passed unanimously. It’s called consensus.”

On Oct. 2, 2017, Lassen Gold Mining sued LMUD, alleging the district had breached the sales contract “by failing and refusing to post substitute security and/or failing to assume the reclamation obligations” stipulated as part of the purchase.

According to court documents filed Oct. 18, 2019, both LMUD and Lassen Gold Mining told the court, “The parties have reached a settlement-in-principle that will likely be finalized and fully resolve the parties’ dispute within the next 30 days.”

The LMUD board approved Resolution No, 2018-06 Oct. 30, 2018 acknowledging its purchase of the Hayden Hill power line, its financial obligation to remove the line and then set aside $916,798.49 to guarantee the line’s removal.

A new measure would impose excise taxes on the sale of guns and ammunition, use proceeds to fund school safety and…

More competition in Wildlife Photo of the Year contest

Sure, those of us in Lassen County root for local photographer Randy Robbins to be the first to win the…

Far Northern Regional Center, in partnership with the California Department of Developmental Services, announced its 2023, Enhanced Community Integration for…

SPI to grow 25 million seedlings thanks to CalFire grant 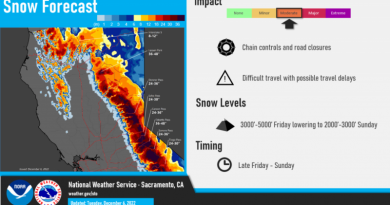