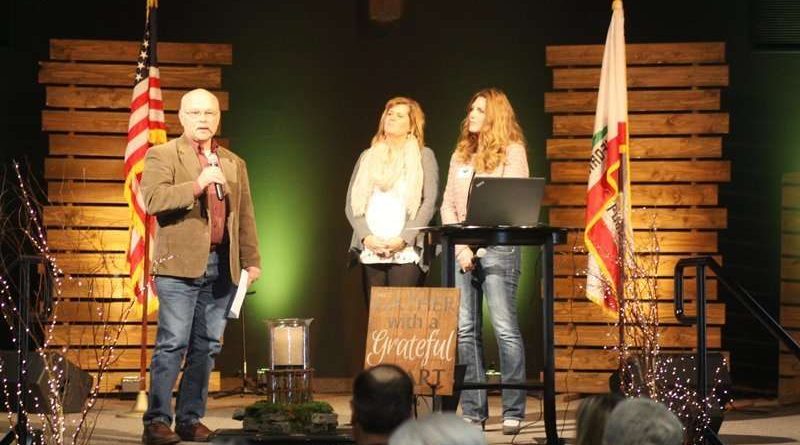 On Thursday, March 23, the Courage Worldwide organization held an assembly to spread information about sex trafficking and rally support at the Community Church of Susanville.

Courage Worldwide is a community organization in support of actively stopping child sex-trafficking in the nation.

The triathlon consists of a 2.8-mile run, a 7.1-mile bike and a 4.1-mile kayak. The event raises funds for Courage Houses. The houses are homes built for children rescued from human trafficking.

The third annual triathlon will be held on Aug. 26 of this year.

The first speaker at the assembly was Bruce Ross, district director for California State

Ross spoke of the importance of educating individuals of all ages, as the acts of abduction and human trafficking are not restricted to cities and counties far away from Northern California.

Ross said, “It is a terrible problem to try to solve, but the first thing to do is educate. Educate young people. Educate older people for the signs to look for. Educate people about the risks. Educate our law enforcement about how to prosecute these cases. They’re not easy; people don’t always want to testify. And get the community active and engaged in this really terrifying issue.”

Lassen County District Attorney Stacy Montgomery was next to speak.

The assembly was centered around the not in my city, not in my state campaign, of which Montgomery urged the significance.

Montgomery emphasized the importance of justice and the great impact an individual can make when standing against unjustified actions. She also brought to light the many communities, such as Courage Worldwide, that were founded from individuals willing to stand up for the right thing.

As Montgomery stated, California Penal Code Section 236.1 states the definition of human trafficking to be “Any person who deprives or violates the personal liberty of another with the intent to obtain labor or services.”

In 2012, California passed Proposition 35, known as the Californians Against Sexual Exploitation Act. This act gave new penalties for individuals in violation of Penal Code 236.1.

However, despite the great advancements California laws have made regarding the penalties of human trafficking, there are still issues surrounding prosecution.

Montgomery said, “The challenges presented in the course of investigating and prosecuting human trafficking can be extremely daunting.

“Among the most common and difficult of these obstacles is the inability or unwillingness of a victim to testify. This reluctance may be based on a variety of factors, including the victim’s fear, shame, distrust of law enforcement and a real, or perceived, lack of alternatives to trafficking as a way of life.

“Sometimes the unwilling victims to participate arise from their relationship with their traffickers who may exploit love and intimate relationships to recruit their victims.”

Montgomery continued to explain that victims might feel great pressure to avoid confining in law enforcement as they potentially have very negative consequences if they do.

Another problem for persecution is corroboration, especially if a victim chooses not to participate.

Cases to persecute a trafficker are time-consuming and expensive as the burden of proof is high and difficult to meet.

A collaborative approach between the advocates and agencies involved is required, especially if the victim is unwilling to testify.

Montgomery said, “It’s difficult to identify the victims of trafficking; often they’re hiding in plain sight. When they’re identified, there are very complex legal issues involved. Relevant issues include organized crime, narcotics, gangs, child abuse, sexual violence and intimate partner violence. All of these issues need to be addressed, and each has its own area of expertise.”

Such cases often require the coordination of county, state and federal agencies.

In addition to the importance of responding to a trafficker, Montgomery spoke of the victims’ needs, many of which are difficult to address.

These needs are difficult to meet due to limited resources available for victims.

Montgomery finished, “Each community, including our own, must start somewhere. Our first step here, in Lassen County, here in Susanville, we can make a start by proclaiming together ‘not in my city, not in my state.’”

Lassen County is the fourth county in California to declare the not in my city, not in my state proclamation. The three other counties are Los Angeles, Sacramento and Elk Grove.

One of the final speakers for the event was Dawn Mattox, a former special victims unit paralegal and lifetime advocate against violence.

Mattox touched on the difference between human trafficking and prostitution, as trafficking is the enslavement of another human being for a multitude of purposes including labor and services.

She said, “It is estimated that 30,000 victims of sex trafficking die each year from abuse, disease, torture and neglect. Eighty percent will be sold into sexual slavery. The average victim is an 11-year-old female.”

Mattox later continued, “The FBI task force assigned to recover trafficked children from our region — that includes the Bay Area, Sacramento, Chico, Redding and Reno — they recovered more than 450 children in the past five years.”

Mattox elaborated on the steps to addiction that have led sex traffickers to their current position. She explained exposure to sex on television might lead to imagining sexual fantasies. Imagination leads to actions including actively seeking pornography.

Mattox closed with a call to action encouraging individuals to hold themselves and their peers accountable for their actions and knowledge.

Chris Gallagher, district board supervisor, presented a resolution on behalf of the Lassen County Board of Supervisors.

Gallagher read from the proclamation: “The Lassen County Board of Supervisors hereby proclaims Jan. 11 as Not in my City, Not in my State and publicly recognizes Jan. 11 as National Human Trafficking Awareness Day, at our local level on this day and in this year and each year thereafter.”

Gallagher then presented a framed copy of the proclamation to Community Church of Susanville’s senior pastor, Rick Conrad.

To further invest in the movement to end human trafficking, community members are invited to the Empower Conference at Community Church of Susanville on April 29.