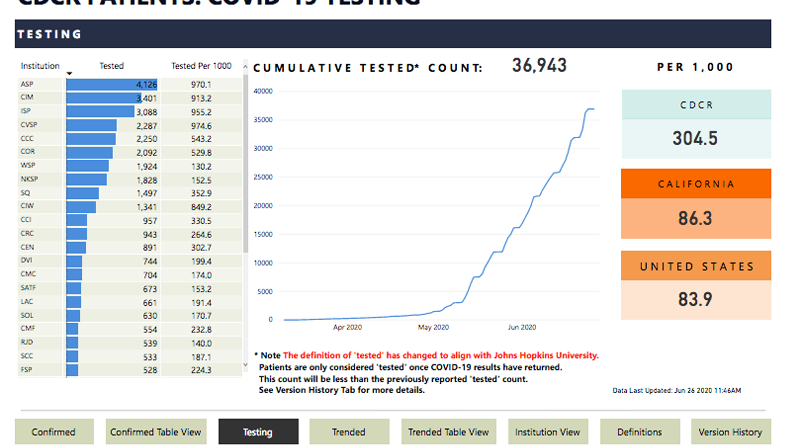 The California Department of Corrections and Rehabilitation is testing inmates at a rate that far surpasses the state and the nation. Graphic from CDCR
News
June 26, 2020September 21, 2020 Staff

The COVID-19 pandemic sweeping the world, the nation and the state got a whole lot more serious and a whole lot closer to home in the past two days as 160 inmates in Susanville’s prisons test positive for the virus — 159 inmates at the California Correctional Center and one inmate at High Desert State Prison.

The outbreak at CCC came after CDCR transferred four inmates from San Quentin State Prison in a effort to reduce the inmate population there as it struggled with a COVID-19 outbreak that some health experts said could explode to threaten the entire Bay Area. Officials said the inmates had previously tested negative for the virus sometime before their transfer, and they were not tested or quarantined immediately upon their arrival at CCC.

Richard Egan, public information officer for the Lassen COVID-19 Incident Command and Lassen County administrative officer, said those cases were among the first reported by the incident command.

And he said Lassen County’s figures only reflect Lassen County residents working at the prisons. If a prison employee residing in Washoe or Plumas county tests positive, that number would be listed by their county of residence. He said he did not know if there were any local prison employees living in different counties who had tested positive.

None of the infected has required hospitalization and there have been no deaths due to the virus reported in Lassen County so far.

But Egan said there’s the concern the virus may spread from the prison to the community.

“We expect it has the potential to spread outside the walls of the prison into the community,” Egan said. “We’re preparing for that.”

While Egan acknowledged the outbreak among the inmates at the prisons also has the potential to slow down the county’s re-opening, that development depends upon a number of factors and that possibility remains unclear at this moment.

“It depends on how it develops and how people are behaving,” Egan said. “The hospitalization is a big trigger point. Right now we have zero people hospitalized with COVID.”

He said he’s not an expert, but he said as the number of cases increases across the nation, the rate of hospitalization seems to be stable.

Given the outbreak of inmate cases, Egan said some prison employees have recently been tested, but the results were not back yet by about noon Friday. He said those tests would be included in our county’s count.

What happens when someone tests positive in Lassen County?

Egan said protocols have been established and followed when someone tests positive for COVID-19 in Lassen County.

“Dr. (Kenneth) Korver (Lassen County’s public health officer) has issued isolation orders for people who have tested positive, and that generally requires a release when their quarantine ends,” Egan said.

He said the length of time and the requirements of the public health officer’s isolation orders are determined on a case-by-case basis.

He said decisions made about inmates are within the prison’s jurisdiction, and they are not subject to the county’s orders.

Our state representatives get involved

“We write to express our grave concerns about the inadequate communication, planning and protocols that have led to an explosive outbreak of COVID-19 among inmates at the California Correctional Center and threaten the health of both prison staff and the broader community of Susanville,” they wrote. “ … we are very concerned that CDCR is making decisions that threaten serious potential impacts to neighboring communities without the kind of planning and consultation that sound emergency management demands.”

The Dahles asked Diaz to answer these questions that many Lassen County residents share:

In a telephone interview late Thursday afternoon, Brian said, “I’m trying to figure out what their plan is because I’m very concerned about our community.”

In a telephone interview late Thursday afternoon, Megan said there was no communication between her office and CDCR regarding the transfer of prisoners from SQSP to CCC — “but that’s been pretty much the model on every level for the past few months.”

Megan said she wants to get all the facts and figure out what and how this happened.

“That sends a signal to our part of the state,” Megan said. “We knew it would eventually get here, but we can’t have it get here where we have overflow surge in our hospitals.”

She also commented on those who don’t believe the virus poses a threat to public safety.

“It’s real,” Megan said. “We have to take the necessary steps. We have the mask debate, we have all these debates, but I think when you start seeing all these positive tests all around us, we’re going to take precautions.”

Talking about the possibility of schools reopening, she said she’s pointing out rural Northeastern California is much different than Los Angeles.

She said in some cases her district would be better served if local officials made the decision.

“The governor says look to your public health officer for guidance, and then he says something else,” Megan said. “It makes their job very difficult, trying to decide who’s in charge.”

Diaz’s office did not respond to lassennews.com’s requests for information.

A public information officer for CDCR twice told lassennews.com a statement was coming from the department, but it never arrived.

According to a Wednesday, June 24 memorandum signed by S. Perry, CCC warden, and R. Duncan, chief executive officer, due to the inmate positive cases at CCC, “routine movement into and out of CCC has been suspended.”

But according to the memorandum, “Effective immediately, CCC will serve as a statewide hub for male conservation camp inmates required the be returned to an institution for COVID-19 related reasons. Any male inmate requiring medical treatment for COVID-19 related reasons will be transported to CCC for treatment and housing. CCC will no longer continue to transfer inmates to camps.” 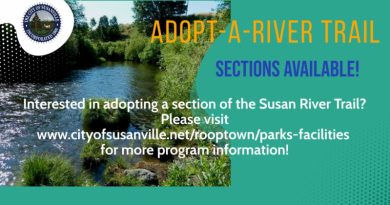 Adopt a section of the Susan River Trail

According to a Facebook post, sections of the Susan River Trail are available for adoption. The City of Susanville;’s Adopt-A-River… 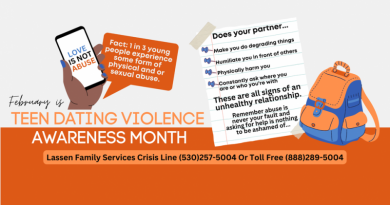 According to a Facebook post, Lassen Family Services announces February is Teen Violence Awareness Month. Love is not abuse, and…

Is the bus taking you where you want to go? The public is asked to share its thoughts on how… 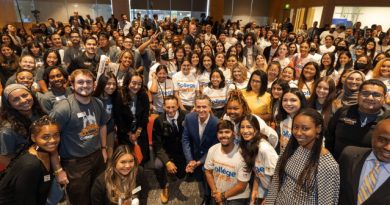 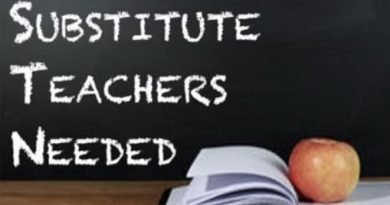 Schools can benefit from substitute teachers, and there is a shortage, according to a Facebook post. If you have a…