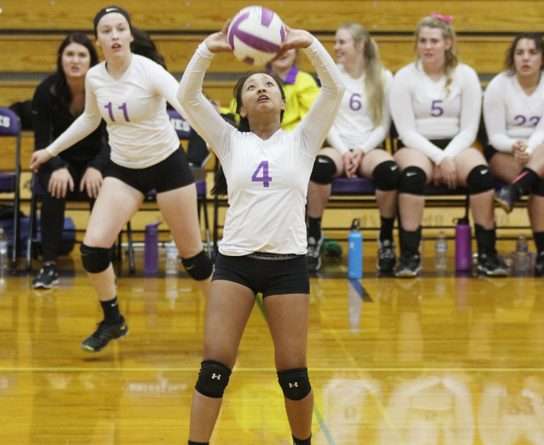 Alyza Andrade sets the ball up for a perfect spike during the second of three matches against Anderson. Photo by Ashley Grogan
Sports
October 14, 2017October 17, 2017 Ashley Grogan, Sports Editor

The Lassen High varsity volleyball team hosted their second game of the league Tuesday, Oct. 3. Taking on the Grizzlies were the Anderson High School Cubs.

Lassen had a rocky start to the conference with a loss against West Valley granting them 0-1 record. The Grizzlies then had to reschedule their Sept. 28 game against Central Valley due to a meningitis outbreak. Thus, with the odds rather stacked against them, the last thing purple and gold fans expected, was a massacre.

The Cubs left the Grizzly den after a 3-0 loss and were reminded that the mighty Grizzlies could never be tamed by a mere pack of Cubs.

In the first of three matches, the Grizzlies definitely put the Cubs in their place with a 25-13 final score.

During the second match, Lassen took on the mentor role and allowed the Cubs to gain the lead for a majority of the game. While in the lead, the Cubs were educated as to how it feels to be a mighty Grizzly. All of the teaching, of course, came to an abrupt end toward the final minutes of the match when Lassen stole the lead once more and finished on top of a 25-23 score.

In the third match, the Lady Grizzlies allowed the Cubs to show off what they had learned in a match of apparent equal ground. However, yet again, as the Cubs approached the winning tally, Lassen swooped in to take the win 25-23 and set the Cubs home with a harsh lesson of reality in their back pockets.

In the first match, Lassen had a well-established lead on their hands prior to Ellie Stewart taking the cake with the first ace of the game served by her hand.

After her ace, Stewart continued to serve a total of five good balls before Anderson truly got the message that they had entered the wrong cave. The Cubs attempted to redeem themselves with a timeout, but the score of 7-1, Lassen, wasn’t looking very promising on their part.

Paige Martin was third to serve for the Grizzlies. She bumped the score up to 10-2, Lassen, with a strong serve that plummeted to the floor on the Cubs’ side without so much as a touch from the Anderson ladies.

While the Cubs were not a bad team, their biggest fault was over-confidence: after a good move on their part, whether it a spike, tip or serve, they were overcome with a sense of pride and of relief. What they clearly didn’t understand was Lassen’s ability to recover and reciprocate to earn the point.

Similar to cubs in the wild, the Anderson Cubs were focused more on proving themselves offensively than understanding the value of solid defense. The Grizzlies were not plagued with such a disadvantage.

During the first match, some great blocks were seen from Stewart, Akilah Bussey and Martin.

Additionally, Stewart, Taylor Shannon and Maddie Hampton did an amazing job of identifying open sections on the Anderson court and aiming their spikes and tips accordingly.

Later on in the match, Bussey stunned the Cubs with an ace that brought the score to 22-12, Grizzlies.

A few more stellar plays and some Grizzly oomph easily took the win 25-13. And sent the teams to opposite sides of the court to prepare for match two.

Initially in the second match, the Grizzlies struggled a bit to find their same groove. The Cubs found themselves in the lead a few times, but the more monumental achievements, such as which team could reach the double-digits first, were still made by the Grizzlies.

Though the Grizzlies were still the superior team on the court, the Cubs couldn’t be counted out just yet. In the span of one Anderson server, the Cubs jumped from eight points to 12, all while Lassen held steady at 13 points.

The Grizzlies were definitely struggling, but after such a grand showing in the first match, fans knew the funk couldn’t last much longer.

The Cubs brought themselves into the lead by two points, and the two-point difference stayed fairly consistent until both teams found their score in the 20s.

With the score at 21-20, Cubs, Lassen subbed in Fawn Robinson to serve. Between Robinson’s two strong serves and a couple blocks seen at the net by Stewart, Lassen stole the lead 22-21.

A spike by Brittney Patton brought the score to 23-22, Lassen, and sent Allyza Andrade to the serving line to score another good Lassen point.

With a technical foul, the Cubs earned their 23rd point and felt their hearts skip a beat with the potential for a win.

However, the Anderson hope didn’t last long as a block with a snap down made by Stewart ended the round, and thus ended the match 25-23, Lassen.

Match three saw some interesting plays from the Lady Grizzlies. While their second point was on the line, Lassen’s Patton, Robinson and Andrade found themselves struggling at the back of the court to keep the ball in play, but a strong bump by Patton sent it back over the net and caused the crowd to cheer in disbelief.

For the fifth Grizzly point, Bussey blocked an Anderson spike and caused Cub brows to furrow as Grizzly grins appeared.

With the use of only two servers, Lassen reached an 8-3 lead and caused the Cubs to call a timeout in hopes of throwing the Lady Grizzlies off of their game.

Lassen continued to shine, though, as a block by Jamie Larson and Shannon brought the Grizzlies to the double-digits while the Cubs were slumming it with four points in total.

With Robinson behind the serving line, a new feeling of fierceness met the court. Between her strong serves, one of which was an ace, and a solid spike from teammate Patton, the Grizzlies were up 17-12.

Soon after the Cubs attempted to gain on Lassen, Andrade recovered the ball and served an ace to bring the Grizzlies up to 19 points.

After Andrade’s second serve caused the court to scramble, a tip from Stewart that was perfectly aimed at an open spot on Anderson’s side of the court brought the Grizzlies within five points of the win.

Tension on the court tripled as the Cubs managed to catch up with the Grizzlies and put a 22-22 tie on the board.

However, the Lady Grizzlies refused to give the Cubs too much confidence. A block and snap down by Shannon brought the Grizzlies up to 24 points.

Though the Grizzlies were up to serve with a score of 24-22 in their favor, the Cubs returned the ball and earned a serve prior to the Grizzlies taking the win.

With a score of 24-23, Lassen, on the board, Anderson served the ball and after a return from Lassen, they attempted to spike for the win. However, a block by Larson sent the ball to the floor and thus granted Lassen the match win 25-23 and the game win 3-0.

Head coach Matt Paine said, “That was a great game all around. Best we’ve played all year.”

Notable performances were seen from Andrade with a total of 18 assists, Martin with eight kills and both Stewart and Shannon with three blocks each.

“We played great. We served tough. We were able to take them out of their game,” said Paine.