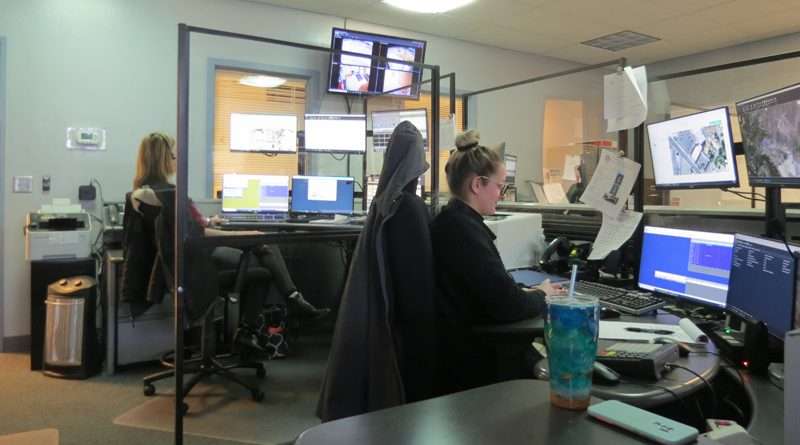 A wall of monitors sits at each dispatcher’s desk at the local Public Safety Dispatch Center at the Lassen County Sheriff’s Office, and each screen displays crucial information from those in an emergency and about the first responders making their way to various scenes. Throughout the past few years, there have been steady improvements and upgrades at the center, which have not only help expand the center’s efficiency, but accuracy as well.

From the capability of certain cell phone carriers to be able to text 911, to an improved records management system and soon better mapping, the dispatch center has undergone vast improvements that not only provide better information, but also help keep the public and officers safe.

The Public Safety Dispatch Center is staffed 24 hours per day, 365 days per year, and serves as the primary public safety answering point for the majority of Lassen County and all of the city of Susanville. The Public Safety Dispatch Center handles all 911 calls for law enforcement, fire, and medical aid, and also receives all emergency and non-emergency calls for both the Lassen County Sheriff’s Office and the Susanville Police Department.

But the dispatch center today looks very different from that from just a few years ago, thanks to the efforts of Lieutenant Dave Woginrich, Captain Mike Carney, Michelle Wolf, Angela Lewis and Gina Mineau: The radio controls, which provide the connection to radio base stations and mountain top repeaters, all the 911 equipment and the records management system have all undergone upgrades to keep up with changing technology and provide the most accurate information possible.

“It’s been good,” said dispatcher Michelle Wolf, who has worked with the center for about 10 years.

When the local department upgraded its 911 system in 2019, they collaborated with neighboring Plumas County to select the same vendor. The two systems were tied, and now Lassen can answer Plumas’ non-emergency and emergency lines and they can return the favor.

“If either one of us has a major emergency, and we can’t keep up with the 911 calls, they’ll roll over to the partner agency,” Lassen County Sheriff Dean Growdon said.

“It’s come in handy a few times already,” he elaborated, saying Lassen was able to assist Plumas when they temporarily lost their 911 center, and also when power outages and generator failures plagued Lassen County last summer. “It’s proven beneficial for both of us.”

An additional new feature of the 911 system is Rapid Deploy, where dispatchers can track the location of calls from a mobile phone.

“The accuracy has been the biggest improvement. On the cell phones, for sure,” Wolf said.

Moreover, through Next Generation 911, funded by the state, the ability for some to text 911 directly is now operational for four cell phone carriers in Lassen: Verizon, AT&T, T-Mobile and US Cellular.

“We do have text to 911 for all those carriers,” said Growdon. “So they can text, and it’ll come up with an alert for the dispatchers.”

Should someone be in a situation where they cannot make a call, and their cell phone carrier is supported, they can text their emergency. While there is a small lag time, the dispatcher can respond via text, and will ask if it’s possible to talk. Those texting an emergency should include what the emergency is and the address at which they are located.

Future plans for Next Generation 911 includes the capability to email and send live videos to the dispatcher.

“We were working with a really antiquated records management system, which we had for probably had for 20, us and the police department,” Growdon added. “We worked on a joint Request For Proposals, and upgraded to RIMS, by Sun Ridge Systems, Inc.”

The new system is a records management database, a jail management system and a computer aided dispatch (which is not quite operational yet).

With the jail and dispatch sharing the information, it’ll help take out human errors like typos.

For the community’s benefit, Citizen’s RIMS will make generalized crime data available to the public.

For example, “If there’s a lot of burglaries in a certain area of the county, people can go on there, start looking at it and see if they should start locking their stuff up a little tighter,” Woginrich added.

Woginrich said the Citizens RIMS rollout may be available in the next couple months.

Additionally, with new laptops for the deputies, and RIMS accessible to them on phones, the local officers are able to better write reports, and get information and send updates straight from cell phones.

Growdon also shared about the new body worn camera phone app, where dispatchers can always see where deputies are when they are logged into the system.

Another upgrade in the works is mapping. The county has contracted with Chico State University for GIS mapping to update the county’s data on addresses for better accuracy. There are also plans to update the generator at the department, since the previous unit, installed about 18 years ago, cannot cover the power draw from the new high-tech equipment. Funds for the generator are coming from the California Office of Emergency Services through the Public Safety Power Shutoff money.

“Overall, we pretty much replaced and upgraded everything,” Growdon said, thanking the sheriff’s office personnel for the improvements. “It’s been a lot of work behind the scenes.”

What does ‘gender affirming’ mean for your child?

The Biden Administration is planning to reinstate rules withdrawn by the Trump Administration that add gender identity to nondiscrimination protections….

Americans for Limited Government President Rick Manning today issued the following statement on the latest consumer inflation numbers. “The price of oil has…

Do my Canadian earnings count toward U.S. Social Security?

Question: I am a 620-year-old Canadian holding a green card, and I have lived in the US for nearly 23…

Anti-abortion extremism is scaring voters — It should

As conservative Kansas just showed, most voters simply don’t want politicians making personal medical decisions for them. Our country may…