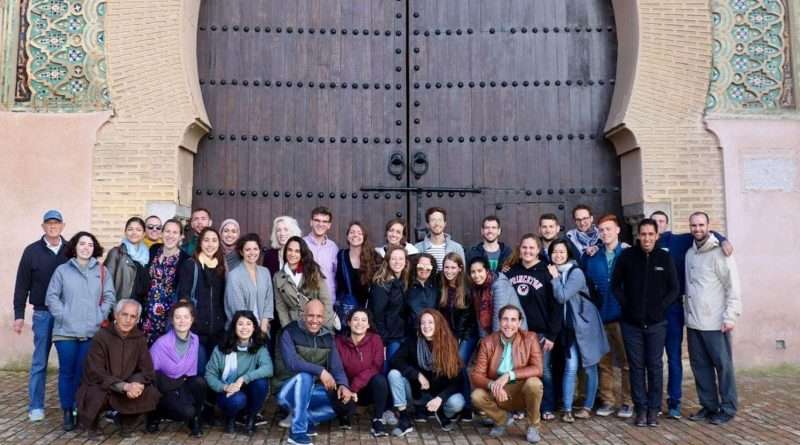 All of us have far more in common with one another than we realize. The things we enjoy, such as music, have profound impacts on our individual experiences.

Being human, music holds the power to magnetize us to one another. Without any prior knowledge, we share the same flood of feelings from across the world, and it has the strength to shape our shared experiences.

His research was hosted by the Refugees, Displaced Persons and Forced Migration Studies Center in Yarmouk University and centers on the country’s response to the Syrian refugee crisis in the north of the country. He also, interestingly, moonlights as a country music DJ, going by the name DJ Doyle.

Nichols also hosts a country music show in Jordan called “Big Country with DJ Doyle” at Bliss 104.3. He has hosted the show every Saturday since April.

Nichols got the name DJ Doyle from his family’s roots in the Lassen County area. His great-uncle Dewey Anderson ran cattle in Doyle, hosting the work of generations of Nichols family on the ranch.

“Three Bar A was the name of the ranch,” said Nichols, “and there are still some plots of it. It’s down by the old Hertz and Slim Pickin’s ranch in Doyle.”

Both Nichols and his brother had been weighing what to do with the property, which was by then mostly broken up and sold. The idea for the show’s name was sparked from the nostalgia for his past, his roots and the traditions he holds alongside it parallels to country music as the similarities found in the traditional music of the Jordanian people.

At Yarmouk in Jordan, Nichols’s work originally centered on human-centered design and technology design. Through his research, Nichols now works as a digital financial services consultant for Mercy Corps, which means he helps to revolutionize the Jordanian digital payment system for mobile cash assistance to female refugees.

His work was built around “technology for use by either humanitarian organizations or for use by Syrian refugees,” tackling questions such as, “what are good methods that you can use to make sure this technology is accessible and usable by these populations who have a lot of constraints?”

Nichols explained the research he does revolves around the assessments of the refugee assistance technologies. The technologies, which many of the refugees depend upon, rely on access to the Internet. Notifications alerting vulnerable populations depend on a human-centered approach, however, Nichols mentioned there are complications to success.

“A lot of people don’t know that the Zaatari refugee camp — which is the biggest refugee camp in Jordan — they’ve actually cut Internet and data access,” Nichols paused and scoffed the notion, “as a security concern.”

This makes the delivery of humanitarian aid to Syrian refugees in Jordan all the more complicated.

“The myth that these are temporary situations is this cognitive dissonance where people don’t want to plan for the future, cause you just say that it’s a temporary situation they’ll eventually go back to their country. The reality of it is that’s probably not the case.”

Nichols detailed that there are still close to 1 million refugees in Jordan. Many are in camps designed for around six months of occupancy, but now the average time refugees are spending in camps is 17 years.

The Jordanian National Aid Fund provides protection and support to needy individuals and families through financial aid, employment opportunities, health insurance services and vocational training to 80,000 Jordanian families. To account for all of the country’s vulnerable populations, the expansion of this fund’s purview is currently being assessed. Nichols likened the fund to Cal Fresh of California or SNAP benefits.

However, with donor fatigue and limited resources from the Jordanian government, unless foreign donors (or a cooperative effort of the private and public sectors) are willing to help the expansion of the dire circumstances for refugees in Jordan, that reality may be far off.

Nichols’s work in country music translates well in Jordan. Which is not surprising for those who don’t know much about Jordanian music.

“What’s been really interesting is, in looking at the parallels of people and lived experiences with different countries … what you start to see is these same dynamics that we have in the states, particularly in rural places — a sense of nostalgia, a sense of tradition — a lot of these common themes are prevalent all in whatever situation and context you put yourself into.”

Nichols spoke of the music of the rural desert-dwelling nomads, known as the Bedouins of Jordan. The music shares similar acoustic sounds and its themes are comparable to country music. Themes such as love songs, extolling the virtues of the beauty of nature, and elements corresponding to a longing for the way things used to be.

“You look at some of the best country music and it’s really about glorifying the struggle of the every-man, every-woman or every-person,” said Nichols, “and that is such a common theme in Jordanian music.”

Nichols recounted another indicator, reflective of the similarities in Jordanian music and country music in the United States.

With friends in his car while passively listening to the usual Arabic music that crosses the Jordanian airwaves, a familiar sound came across the radio. It was the opening of “Whisky Lullaby” by Brad Paisley and Alison Krauss.

“So they’re such fans of sad music that this really spoke to them. It turns out that’s actually one of the most popular country songs here,” said Nichols.

Nichols further showed, as a consequence of his considerate and conscious efforts, he was able to make true connections.

“Because I think there has been a true exchange of culture; because there’s not a power dynamic, people don’t have to speak a second language to communicate with me … it feels like I can be goofy, silly … and tell this goofy story about Doyle … on the air, and even though people have no idea where Doyle is, because I’ll interject with some Arabic, there’s a common ground there that develops.”

Rather than utilizing his positions for superficial self-gain or approaching his work and life in Jordan without engulfing himself in understanding, Nichols’s made concerted efforts to reach out and meet Jordanians at a level of understanding, empathy and camaraderie.

His work to personally and fully educate himself on their culture, language and personally engulf his life with Jordanians has brought an authenticity and weight to the sincerity of the work he does as a DJ.

Nichols said, “If I was just some white boy that came to Jordan and put on a country radio station, and hadn’t really dug into this place — you know, lived in a town that’s far away from the capitol, learned the language, spent time working with people, developing some of my best friendships to be people from the country itself — then it would just have that same feel.”

In Nichols’s near future, he plans to host a podcast in Lassen County called Dispatched in Doyle, to be conducted out of Doyle. Nichols is looking to dig into the indicators of societal migration patterns and their impact on music.

The nature of his endeavor takes the world of his lived experience, especially in its relation to his time in Jordan, and finds the pulse that binds us from across the world.

He’s keying in on Reno, a city population of destination and displacement.

“We want to see if we’re in Reno, with having people come and having people go, if you look at lyrical content, musical style and genre, and instrumentation — what instruments people are using — can you identify indicators of human migration with those three things,” to which he concluded, “What would be so cool is to be able to map human migration through songs.”

According to the Caltrans website, a high wind advisory is in effect from Johnstonville to the Nevada state line. Travel…