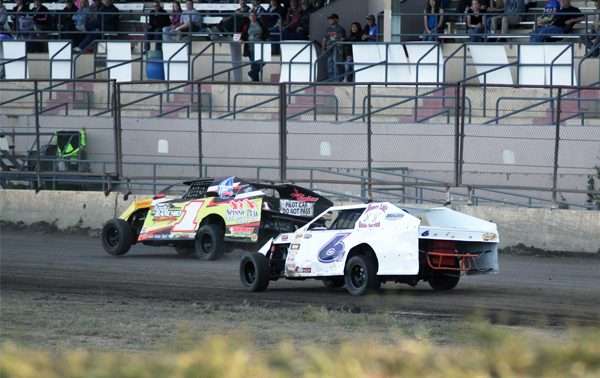 Modified racers Chase Neiman, left and Matt Murphy speed up for the straightaway after another turn around the track on Friday, May 26. Photo by Ashley Grogan
Sports
June 16, 2017June 14, 2017 Ashley Grogan, Sports Editor

The Diamond Mountain Speedway race season is in full swing at the Lassen County Grandstands. Racers from the different divisions gave a great send-off to May with the Friday, May 26 races.

One of the racers, Joe Marlow, took the time to provide an insight as to what racing means to him.

Marlow has been racing for 56 years and has been behind the wheel of midget cars, modified midgets, mini sprints, sprints, stock cars and mini stock.

Currently, Marlow competes in the stock car races in Susanville.

Marlow began his racing career when he was under the age of 10 years as he often watched his brothers race in Oroville, California as well as at the Silver Dollar Speedway in Chico, California.

He began his racing career at the age of 7 years with dirt kart racing in Winston, Oregon.

After the inspiration from family drove him to start racing, the journey never ended for Marlow. In 1970, he took his passion for racing to Arkansas. Though he would occasionally race in Susanville, Marlow didn’t establish a permanent residence in Susanville until 1993.

According to Marlow, Susanville has seen races from the stock car racer for a total of 26 years.

Marlow said he doesn’t set specific goals for the racing season as he just uses the sport as a recreational pastime. According to the stock car racer, his main motivation for continuing in the sport is the support he receives from his friends and family.

“I get to race alongside Richard Longacre. He is my best friend, and if it wasn’t for him, I probably wouldn’t be racing right now,” said Marlow.

In addition to Longacre, Marlow expressed his thanks toward mini racer Raymond Talavera for helping him build and maintain his vehicle.

Talavera has been a great support for Marlowe financially as well as in spirit. Marlowe said he doesn’t participate in the heat races to ensure the car continues to function loyally.

In general, Marlow was sure to thank his many family members and friends who sponsor him as well as support his passion.

The results from the May 26 races are as followed: