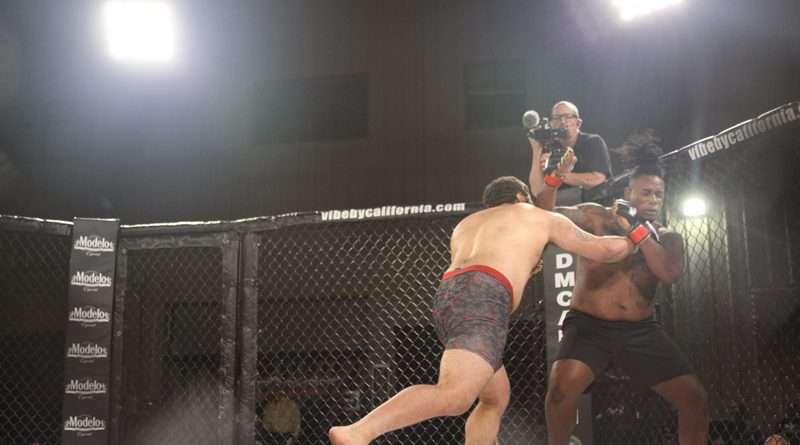 A few local fighters from the Iron Pit fight team competed to represent Susanville in the local event such as Mike Morales who was slotted as the main event of the evening.
The first bout of the evening was Christopher Costa against Terry Mason, who made his amateur debut.

The start of the fight Costa came out swinging, then followed it up by shooting for the legs. Mason was able to flip the script and get on top of Costa following the slam and get into a full mount position. He begin raining hands down as Costa attempted to defend himself but took some damage from a big hit by Mason, which started a massive nose bleed. At that point, the bell rang to signal the end of the first round.

The second round started very much like the first. Costa came in hot with a flurry of punches. Mason countered and shot for Costa’s legs, putting him back to the mat. Costa tried to get a choke in while on his back, but both were unable to get any significant movement going, so the ref stood both fighters back to their feet. Mason wasted no time, throwing two big right hands that put Costa against the cage. They went into the clinch and Mason continued the assault, breaking free to pummel Costa until he couldn’t defend himself. The ref ended the match then, giving Mason the win by TKO.

Fight two of the evening was Ethan Krieger facing off against Philip Sharber. The fight was a quick one as both fighters fought in the clinch against the cage for the first minute and a half. That was until Krieger slammed Sharber to the mat, where Sharber’s arm landed in the wrong place and his elbow was dislocated from the socket, effectively ending the fight. Krieger was awarded the win by submission.

The third bout of the evening was one of two female fights, between local Iron pit fight team member Denise Miller and Ashleigh Snover. The solo round fight started with Snover landing some accurate and powerful strikes. Then the fight took to the cage with Miller’s back against it, fighting the take down attempt by Snover.

They broke off the cage to engage in a striking contest, but that quickly changed when Miller was again backed into the cage. She attempted to lock in a guillotine choke on Snover, but Snover took the opportunity to turn the fight to the mat, breaking Miller’s choke. Snover turned the tables and took Miller’s back where she locked in a rear naked choke for the win by submission.

If there were a fight of the night award, the fourth fight of the evening would have won it. The second female fight in the bantamweight division was Christina Joy Bush versus Jordan Raulston. The start of the fight, both fighters came out hot and fast, testing range with quick jabs. Bush then took Raulston to the ground, but Raulston used that to her advantage to attempt an arm bar. Bush managed to stave off the attempt. Both fighters scrambled to their feet after Raulston’s failed submission attempt and continued the fast paced striking.

The second round, Bush rushed Raulston with a combo of punches, putting Raulston against the cage, but that didn’t hinder Raulston. She responded with a big one, two, combo to send Bush reeling back. Bush was still relentless, taking punishment and dealing it back but both fighters sustained big damage in the second and continued into the third and final round. Continuing the kickboxing game, both were tirelessly fighting for the win, but Raulston’s hands were hitting with more force putting real damage to Bush’s face. But Bush didn’t relent either exploding into flurries of her own. At the ring of the bell it was thought to be a close one but Raulston was declared the winner by unanimous decision.

The fifth fight of the night was local Auston Stewart in his amateur MMA debut against Evan Cunningham in the heavyweight division. The ring of the bell kicked off the first round of the fight as Stewart and Cunningham circled the cage, gauging their distance with leg kicks and quick jabs. Stewart however found his mark with a big right hand to Cunningham’s chin, sending him to the mat where Stewart followed continuing the assault from above till the ref stopped the fight give the Susanville local Stewart the win by TKO.

The sixth fight of the evening was a big one; it was for the Pure Combat Amateur Flyweight Championship belt, between Alex Mosier sitting a record 5-4-1 before the fight and Wesley Lancaster 4-0-0. The fight started slowly as both circled the center of the octagon looking for the moment to strike. Lancaster initiated the fight taking Mosier to the cage putting two knees into Mosier’s mid-section.

Lancaster came out strong in the third round landing a powerful front kick to Mosier’s chin then attempted and missed a second one that’s when Mosier took Lancaster to the ground. Once on the ground, Mosier looked for the TKO finish but Lancaster had attempted to get out of the situation but turned to give his back up to Mosier, who took the advantage and locked in a rear naked choke to win the Amateur Flyweight Championship belt.

The next fight was a professional bout in the light heavyweight division between Will Hope and Nick Maximov.  At the ring of the bell Hope circled Maximov, but it was Maximov who struck first with two fast kicks. Hope, however, responded quick, getting a hold of Maximov slamming him into the cage. Maximov used that momentum from the cage to take Hope to the ground.

Maximov then used the opportunity to take the back of Hope where he rained bombs down on Hope’s head till the ref stopped the fight giving a TKO victory to Maximov.
The eighth fight of the evening was a clash of titans in the super heavyweight division between Herlong’s Sean Tucker facing returning fighter from last year’s High Desert Brawl Josh Bonner. Round one of the bout was slow as they circled the cage for the first 30 seconds of the round until Tucker began kicking at the left leg of the south paw Bonner.

Bonner finally exploded with some aggression on Tucker landing several blows but Tucker took the punishment and returned one big right hand, rocking Bonner back before the end of the round. Tucker continued chopping at Bonners left leg where it began to where on Bonner later in the round slowing his movement down. Bonner was still able to find the hole in Tuckers defense landing small flurries of punches but nothing that rocked Tucker.

Going into the third round Tucker again continued to work at Bonner’s left leg, which was causing a limp in the tall Bonner. Bonner was showing definite signs of being gassed and Tucker was now deflecting his punches with ease. The round ended and went to the judges’ scorecards where Tucker won by unanimous decision.
Fight nine of the night was in the welterweight division, as Chris Ensley fought local favorite Justin Baesman.

The fight was a quick one as Baesman and Ensley traded blows with each evading and blocking effectively until Baesman got Ensley against the Cage. Baesman found the opportunity to enclose his arm around Ensley’s head and neck catching him in a guillotine choke for the win by submission.

The co-main event of the evening in the heavyweight division was Ryan Williams versus Trevor Carlson. Carlson came out fast toward Williams, punching into the cage but due to the recent rains Carlson lost his footing and slipped so Williams used that advantage to throw some hammer fists down.
Carlson was able to wrap his leg around Williams left arm and subdue the onslaught but Carlson couldn’t hold the arm for long and Williams continued the ground and pound from half guard.

Carlson flipped the ground game to his advantage putting Williams on his back taking the reverse mount where he laid into William’s ribs with some big right hands. Williams was unable to defend but luckily the bell rang giving Williams a chance in the second round. Carlson didn’t waste anytime going into the second round, putting Williams against the cage then slamming him into the mat to finish with a ground and pound TKO victory over Williams.

The main event of the evening followed with local Mike “Chunk” Morales fighting Josh Miranda. The start of the fight Morales came out aggressive and explosive, landing several jabs and big right hook knocking Miranda to the mat. Miranda, once on the mat, however, got ahold of Morales’ foot bringing the fight to the ground where Miranda attempted a heel lock.

While in the choke Morales was still able to throw some fists back at Miranda’s face causing visible damage and preventing Miranda to focus on the choke.
Going into the second round Morales slammed Miranda with a big right hand putting him back to the mat, where Morales looked to get back into a ground and pound position but Miranda was able to defend against the onslaught of hammer fists and elbows.

Miranda eventually shuffled out of the Morales mount wrapping Morales right arm behind him and between Miranda’s legs where he was able to lock in an unorthodox omoplata shoulder lock defeating Morales 2:48 into the second round.