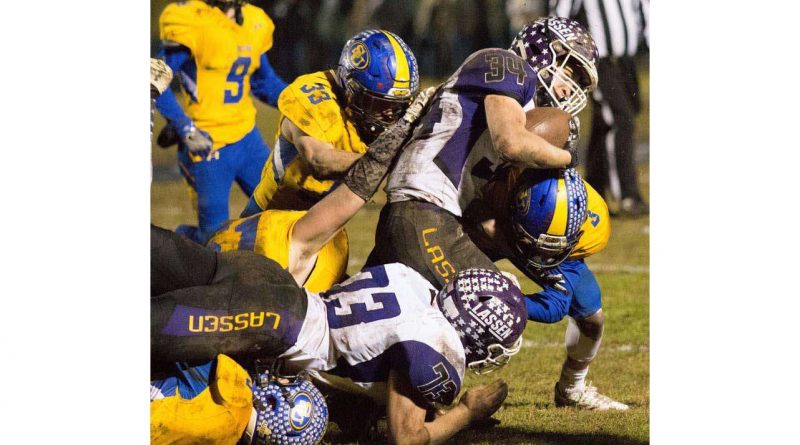 With a 6-0 league record and a 2-0 record from the first two rounds of playoffs, the Lassen High School varsity football team earned its way to the Northern Section California Interscholastic Federation, commonly known as the NSCIF championship game.

The only team standing between the Grizzlies and the championship title was the Sutter High School Huskies.

The Grizzlies traveled to Sutter High in order to face their final rivals of the 2016 season on Saturday, Nov. 26.

The Grizzlies ended up losing the game to Sutter 42-7, but feats were made all the same.

Common opponents between Sutter and Lassen included Gridley, Wheatland, Yreka and West Valley. With all of the above Sutter games, the Huskies left the field without a single point scored against them, but Lassen broke the streak by scoring a touchdown and PAT to bring the untouchable Sutter ego down a notch.

The championship game was initiated by a Lassen kickoff arching down the field into Sutter possession.

The Grizzly defensive line made a few great moves, but delays could only be made so often. Sutter scored the first touchdown of the evening via a completed pass. Six minutes remained of the first quarter when Sutter scored a good PAT.

While Grizzlies’ offense gave the Huskies a piece of their mind, the defensive Husky line was too much to overcome.

However, the Grizzly defensive line was just as powerful. The score remained at 7-0 as the first quarter came to an end.

While the second quarter looked more promising for a riled up Grizzly line, the defensive energy exerted in the first quarter took its toll on Lassen.

Offensive plays and defensive actions were taken throughout the quarter, but with five minutes remaining in the half, the Huskies made a second completed pass in the Grizzly end zone, marking touchdown number two for Sutter. A good PAT brought Sutter up to a 14-0 lead.

Unfortunately for Lassen, the Huskies quickly regained possession post-kickoff and made a rushing touchdown with less than two minutes left on the clock.

Another good PAT brought the score up to 21-0 with Lassen quickly losing sight of the win.

Halftime was called and the Grizzlies tried to shake off the cold with purple and gold spirit. Across the field, the Huskies were keeping warm in their pack as adrenaline cycled through their veins.

Sutter kicked off to Lassen to start the third quarter.

The Grizzlies played rough and tumble and were able to progress onto Sutter territory within the first minute of the second half.

With less than 11 minutes on the board, Lassen made a pass toward the Sutter end zone. However, the Huskies couldn’t control their need to fetch the ball. An interception put the ball at the Huskies’ 22-yard line.

The next minute was a tough battle between the Grizzlies and Huskies as Sutter continued to break down every wall Lassen tried to build.

However, with 10 minutes on the clock, the Grizzlies were able to recover a Husky fumble and gained possession just three yards from the Lassen end zone.

The Grizzlies pushed the line further away from their end zone as the offensive line refused to cower to the Husky pack.

With nine minutes on the board, Sutter intercepted a Lassen pass and gained possession once more at the 25-yard line in Grizzly territory.

Less than 75 seconds later, Sutter completed a 20-yard pass for a touchdown.

Upon Sutter’s kickoff to the Grizzlies, a surge of power hit every Lassen player. The ball was caught 17 yards away from the Grizzly end zone.

With two minutes on the board, the Grizzlies sparked a Red Zone Alert as they had finally passed within 20 yards of the Sutter end zone.

Tension was high throughout the crowd as many purple and gold fans had refused to give up on the boys.

With less than two minutes on the clock, Colby Harris sparked an eruption of cheers on the Lassen side as he scored a five-yard rushing touchdown.

Hunter St. Andre did not disappoint with a solid PAT, bringing the Grizzly point tally up to 7.

Quarter three was called with 28-7 on the board.

Upon the first few minutes of the final quarter, Sutter punted to the Grizzlies. Lassen then took over possession at their 44-yard line.

With nine minutes remaining of the game, Sutter gained possession only four yards in their favor from the 50-yard line.

Another Husky punt sent the ball to Grizzly possession at their 20-yard line.

With six minutes on the board, Lassen punted and ultimately gained 16 yards for the purple team.

Within the next two minutes, the Huskies managed to push toward the Grizzly end zone until Sutter scored a touchdown via 13-yard rush.

Another good PAT was put on the board before Sutter kicked off to Lassen once more. Lassen caught the ball only 20 yards from the 50.

With four minutes on the board, Sutter showed off their interception talent by taking possession at the 25-yard line on Grizzly territory.

The final touchdown made by Sutter was an incredible 44-yard rush that caught Lassen by surprise.

The Grizzly defensive line was equally as damaged as their offensive starters, but the fight would go on.

Sutter kicked off to the Grizzlies with four minutes on the board and immediately sprinted to tackle the Grizzly runner who caught the ball at the Lassen 28-yard line before rushing toward the 50.

With a fourth down threatening possession, Lassen punted the ball with two minutes remaining of the half. Sutter caught the ball on their 34-yard line.

By the end of the game, the Grizzlies had held off any further attempts by the Huskies to make another touchdown. The score was put to rest with 42-7 on the board.

The Grizzlies then returned home to initiate hibernation after earning the runner-up title for the championship competition.

The boys worked extremely hard throughout the season and proved it with their overall record of 11-2.

Next year’s varsity has big shoes to fill, but Lassen County knows that the Grizzlies are up to the challenge.