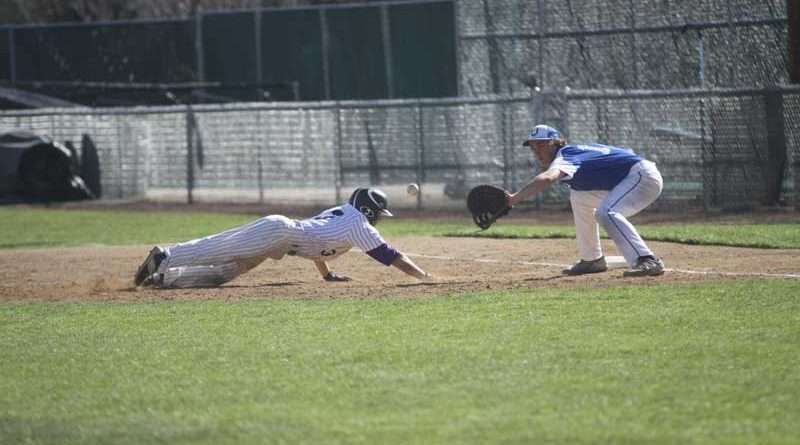 Grizzly fans flocked to the stands at Memorial Park Tuesday, April 17 as the Lassen High School varsity baseball team prepared to take down the visiting U-Prep Panthers with ease.

Prior to the game, both the Grizzlies and the Panthers were sitting on an undefeated league score of 4-0. One way or another, the home game would change this fact, and Lassen swore to end the game in favor of the purple and gold.

The Grizzlies held true to their promise of an exciting game as the final score reached 5-2 in their favor.

The Grizzlies and the Panthers initially seemed well matched as the teams were back and fourth on the scoreboard for the first couple innings, but things turned around once the Grizzlies were back at bat in the fourth inning.

Unfortunately for the Panthers, once the Grizzlies gained the lead, they were unwilling to let it go.

In the first inning, the Panthers seemed to pace themselves with one run scored. They believed the run to be a show of dominance, but the message wasn’t as clear as they had initially hoped.

Rather than take the Panther run as a threat, the Grizzlies viewed it as an opportunity to toy with their opponent.

In the bottom of the first, Miles Ormachea started off with a single before Steven Cagle stepped up to the plate.

Cagle then hit a double that allowed Ormachea to sprint around second and third before heading home.

The Grizzlies then ended up loading the bases to watch the Panthers panic. With Cagle on third, Spencer Lively on second and Malik Delgado, the sense of fear was clearly seen on the many Panther eyebrows both on the field and in the dugout waiting for their chance to bat.

Interested in the response, the Grizzlies finished the inning with only the one run recorded and allowed the Panthers to return to bat.

The top of the second inning saw another Panther run and the visiting team was visibly more relieved.

Still entertained by the wave of emotion seen from the opposing team, the Grizzlies decided to repeat their strategy and brought in one run in the bottom of the second.

While in the second inning, Zachary George was hit by the pitch to start things off. George then stole second while Josiah Snell was at bat.

After Snell struck out, George stole third with Darrell Miller at bat, which caused an outburst of yelling from the Panther section of the stands.

Miller was then hit by the pitch, and the defensive tension was thicker than ever.

Ormachea returned to the plate, eager to bring George in, but it became apparent that George didn’t need Ormachea’s help to achieve the feat.

Miller and George made a mockery out of the Panthers as Miller strolled off first base and caused the pitcher to throw to the first basemen. However, Miller seemed unfazed by the throw and continued to stroll to second.

Thrown off by Miller’s devil-may-care attitude, the Panther first baseman simply stood with the ball and a furrowed brow. Meanwhile, the Panther coach and many Panther parents were screaming to tag the Grizzly to secure the out.

Instead, the first basemen chose to throw ball to shortstop, and in the midst of all the confusion, Miller managed to return to first without penalty.

Meanwhile, George had utilized the distraction to steal home and caused the Grizzly fans to erupt in cheers.

The inning ended soon after George’s run and a serious discussion could be heard from the Panther dugout.

In the third inning, the Grizzlies waited for a response from the Panthers, but were disappointed to see that U-Prep was not willing to score.

Out of respect, or perhaps out of mockery, the Grizzlies also chose not to score in the third inning.

Inning four, however, was fair game.

After another scoreless top of the inning, Lassen turned fierce and brought in two more runs to establish their lead once and for all.

Delgado walked to first before sprinting home with George’s triple to thank.

George, now under the close watch of the Panthers, didn’t allow the glares to deter him from his mission. A bunt from Snell sent him home.

The fifth inning again brought in nothing for the Panthers, but the Grizzlies secured one more run to be on the safe side before calling it good.

In the fifth inning, Jacob Bennett walked with two outs on the board and swapped out for Kaleb Kiar. Delgado followed with a single that sent Kiar to second and another single from Finn Osborn allowed Kiar to sprint in.

With a 5-2 Grizzly lead, Lassen resisted additional runs in the sixth as the Panthers again failed to respond.

The top of the seventh was again fruitless for the Panthers, and thus the game was called with Lassen earning the win.

During the game, Seth McCart started on the mound for the Grizzlies and stayed there for six innings. McCart allowed eight hits, two runs and struck out one.

In the seventh inning, Miller pitched as relief and struck out all three batters faced.

Prior to hosting the Panthers, Lassen played against the Anderson Cubs on the road Friday, April 13.

The Grizzlies won against the Panthers with a score of 7-1.

Pitchers were David Painter for six innings and Miller for the final inning.

Painter allowed four hits, one run and one walk. He struck out seven batters. Miller struck out two and gave up no hits and no runs.