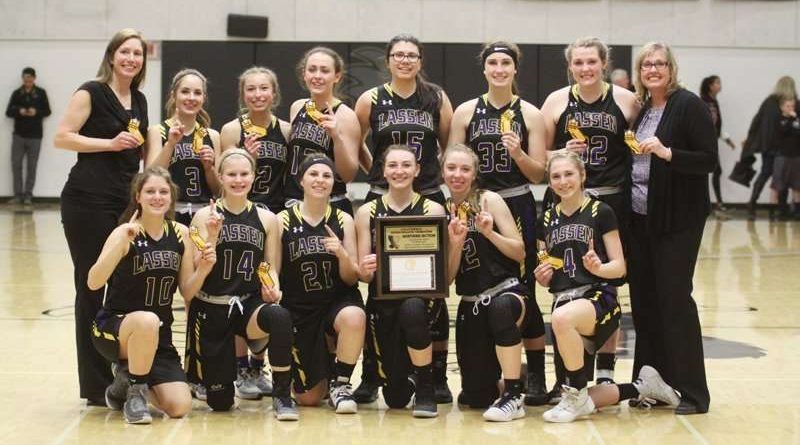 The Lassen Ladies worked hard all season and put every ounce of Grizzly fire into the post-season NSCIF Division 4 playoffs. Not only did the team make it through the first three rounds of playoffs, but they claimed the champion title after winning 48-40 against U-Prep on Friday, March 3.

Held at Butte College, the game against U-Prep was filled with tension from the start. As of Thursday, March 2, the Lady Grizz team had yet to emerge victorious from a game against the U-Prep Panthers.

Despite the odds looking against them, of all days to decide to win over the Panthers, Lasse n knew that March 3 was the perfect pick.

The game began with an immediate Grizzly advantage as Makenna Busse won the tip-off and Ava Steele swooped in to score the first basket.

With an assist from Gracie McCoy, Steele scored again at 6:38, but despite the 4-0 score, the Lassen Ladies kept their cool.

U-Prep finally joined the game with a good free throw at 6:20, but McCoy didn’t hesitate to shoot down the Panther pride with a layup less than 15 seconds later.

While the Lady Grizzlies were on fire score-wise, they certainly paid the price.

Two Panthers found their place behind the free throw line back-to-back after Grizzlies fouled. Luckily, though, only one of four attempted shots was successful.

McCoy was back with the ball as the clock neared the four-minute mark and overshot what appeared to be a three-pointer; however, the shot was actually a pass to Hannah Carson, who in-turn sank a basket for Lassen.

Busse was fouled shortly after and took her place behind the free throw line. With one good shot in, the Grizzlies solidified their score of nine points to enter the second quarter.

Prior to the first quarter’s end, U-Prep landed three baskets and brought their score up to eight points.

Upon the Panthers’ attempt to return the ball down court, McCoy intercepted a pass and executed a layup to bring Lassen up to 13 points.

U-Prep joined the double-digit club with a three-pointer at 6:20, but their 11-point total didn’t carry the intimidating effect they had hoped.

By the time the clock hit the final five minutes of the half, Busse had passed the ball down the court to McCoy, who easily executed another layup, and Jamie Larson landed her first basket of the game.

The Panthers gave another three-pointer before a timeout was called, but what first began as shock of the Grizzlies’ lead turned into fear.

The Grizzlies were in no mood to reassure U-Prep either; Carson received a pass from McCoy with 3:40 on the clock and followed up with a layup.

Busse denied the Panthers any form of comfort by intercepting a pass moments later. She then passed to McCoy, but with a rather aggressive Panther attempting to pounce on the Grizzly, a jump ball was called.

Carson and Larson seem to have their jump ball strategy down to a science. With Carson throwing in and Larson immediately transferring the ball and energy into the net, Lassen happily sported 21 points.

U-Prep landed a basket with less than two minutes on the board and continued their attempts of intimidation.

Noting that their intimidation techniques weren’t getting the job done, Panthers started to swarm around Larson as she entered the offensive key.

Despite the hands waving in front of her, Larson kept her wits about her and showed off her skill. A shot aimed at the backboard ricocheted into the net and sent the Lassen crowd wild.

Another jump ball was called in Lassen’s favor, and while the clock was dwindling down into the final five seconds of the half, time-anxiety didn’t show on the faces of the Grizzlies.

A throw-in from Jaz Brussatoi and a shot from Busse secured a final score of 25 points for the first half of the championship game.

Quarter three began with a basket from U-Prep, but McCoy’s three-pointer to follow was too brutal of a burn for the Panthers to handle.

U-Prep was quick to score another basket, but McCoy landed a two-point field goal to negate the success yet again.

Another basket by U-Prep was followed by a basket from Busse, and fans could see steam rising from the Panther side of the court.

U-Prep shot another basket with less than three minutes on the board, and Maddie Hampton hardly waited 10 seconds before making a layup for Lassen.

A 34-24 Grizzly score found the Panthers in a sour mood.

Two baskets for U-Prep seemed to ease the Panther anger, but apparently Lassen had the idea that content opponents were not fun components. Brussatoi shot a basket and a good free throw to finish off the quarter.

Much To U-Prep’s dismay, Lassen was once again nine points in the lead.

The Panthers landed two good free throws to start off the final quarter.

Larson landed a basket at 7:16 and McCoy followed suit at 6:45. Both continued to don eyes of innocence, obviously oblivious to the Panther’s frustration.

Dani Nevis launched the ball down court less than a minute later after U-Prep attempted another basket. Larson was on top of her game and caught the ball before dribbling into the key and sinking a Grizzly basket.

With four minutes remaining of the final quarter, the Panthers boosted their score with a basket, and then followed with a timeout.

It is unknown what the Panther coach said to the U-Prep Ladies, but it appeared to strike a poor chord of some sort.

At 1:16, Lainey Nevis was fouled by a Panther on edge.

As this was the seventh Panther foul of the half, Lainey Nevis swiftly took her place behind the free throw line and decided to sink both of her free throws.

The 10-point difference was tantalizingly within reach for the Panthers, or so they thought.

With 55 seconds on the clock, U-Prep landed a basket and shortened the point-gap by two.

With 14 seconds on the board, the Panthers repeated themselves and were within a six-point reach of Lassen.

However, the U-Prep tally refused to budge after the last basket.

In a fit of vengeful rage, one Panther made the mistake of fouling McCoy with a mere four seconds on the board.

Whether it was the frustration of being fouled against or simply the joy of a secured Championship win, both of McCoy’s shots were successful and the Grizzlies finished the game with 46 points to counter U-Prep’s 40.

The Grizzlies squealed as the buzzer rang and upon running to each other in a giddy huddle, the entire section of stands that was occupied by Grizzly students stood and joined the cluster of girls on the court.

Each Lady Grizz player received a patch to recognize their NSCIF Division 4 Championship win. In addition, the team was honored with a plaque to be displayed at Lassen High School.

Busse received a special honor and was named Sportsmanship Player of the Game.

The final score was a 62-61 loss for the Grizzlies.