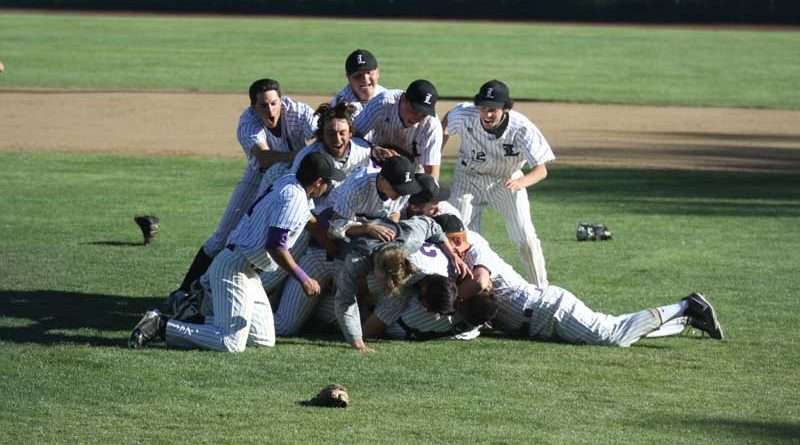 The Lassen High School varsity baseball team cannot contain their excitement upon winning the second game against Sutter High School during round two of the Northern Section California Interscholastic Federation Division IV Baseball Playoffs at home Friday, May 11. With the win, the boys earned a spot in the Section Championships. Photo by Ashley Grogan
Sports
May 22, 2018June 12, 2018 Ashley Grogan, Sports Editor

The Grizzly growl proved to be more powerful than a Husky howl on the baseball field Friday, May 11.

The Lassen High School varsity baseball team took on and took down their nemesis, the Sutter Huskies, during round two of the Northern Section California Interscholastic Federation Division III while at home May 11.

Sutter, seeded third in the playoff bracket, initially traveled to Lassen with a sense of pride in their every step. The Huskies have established themselves as a strong rival against the Grizzlies since taking Lassen down in the 2017 Section Championship game.

However, Lassen was ready to change things up a bit by finally ending Sutter’s winning streak.

The second round of playoffs was a doubleheader against Sutter. The round had a best out of three basis with a tiebreaker game scheduled for Tuesday, May 15 if the teams split the May 11 doubleheader. The gesture was proven unnecessary as Lassen sweeped at home for the doubleheader and thus prepared for the Section Championships.

After winning both games, Lassen’s head coach Scott Foreman said, “I think I had about four heart attacks. We ended Sutter’s six straight Section Championships, which was big for us because we lost to them three of those six. So we put an end to the streak. Sutter has sort of been our nemesis; we could never get by Sutter.”

The first game against Sutter seemed to have the Huskies with the advantage up until the final inning.

Initially, the teams kept things fairly even with each side scoring one run in both the first and second inning. However, Sutter started to gain the edge in the third inning as the Huskies scored two runs and Lassen could only respond with one.

Inning four furthered the Husky lead with three runs scored by Sutter and again only one scored by Lassen.

Sitting pretty on the favorable end of a 7-4 score, the Huskies started inning five with a tad too much confidence.

When it came time to bring in additional runs and effectively secure the lead, the Huskies choked.

Sutter was unable to score any runs in the fifth, sixth or seventh inning, despite their efforts.

The Grizzlies, on the other hand, seemed to tighten their grip on the Huskies.

In the bottom of the seventh, Lassen sprung into action and stole the rug out from under the Huskies with a total of four runs scored.

With the final player stepping on home plate, the Grizzlies erupted into a frenzy of cheers and joyous embraces.

The Huskies, dumbstruck, had trouble picking their jaws up from the ground.

Dyer and Bennett had one RBI each and Snell had two.

Osborn faced 22 batters with one strikeout. He gave up five hits, three runs and one walk.

The Grizzlies were effectively warmed up for game two, and it showed.

In the first inning of the second game, Lassen established a two-run lead. Then, a homerun by Miller brought the Grizzlies to a three-run lead.

Sutter, scoreless up until the third inning, finally kicked it into gear and decided to tie things up with three runs scored in the top of the third.

With a 3-3 score opening inning four, the Grizzlies knew they had practically wiped the slate clean and were ready to start strong yet again.

First at bat, in the bottom of the fourth, was Snell with a triple to start things off hot.

Lowgan Fisher then singled up the center and brought Snell in.

A single from Ormachea followed and with Dyer at bat, Fisher stole third base and Ormachea stole second.

Though Dyer struck out, Bennett stepped up to the plate next and a wild pitch sent Fisher home.

With another two runs to Lassen’s credit, the game entered inning five.

The fifth inning was fruitless for both teams, but the same couldn’t be said for the sixth.

During the top of the sixth, the Huskies attempted to shake off their fears and effectively advanced their score by two runs.

Lassen, on the other hand, outscored the Huskies yet again with a total of five runs brought in during the bottom of the sixth.

Miller was the first to reach the base with a single. Then, Ormachea hit a sacrifice that allowed Miller to advance to second.

Dyer hit a single as well and reached on a fielder’s error. George then was substituted in to run for Dyer and vowed to serve the position well.

A single by Bennett brought Miller home and a double from Lively allowed both George and Bennett to sprint home as well.

Osborn walked and was sent to second with a single from George. Upon George’s hit, Lively attempted to slide home, but the ball was a bit too quick and Lively instead acquired the second Grizzly out of the inning.

A single hit by Snell brought Osborn in and sent George to second. Then, a single by Seth McCart allowed George to slide home and Snell to reach third.

Unfortunately, the Grizzly success had to end there, but 10 runs for the game was nothing to scoff at.

In the final inning, Sutter managed to put in one more run, but the Huskies couldn’t manage any more.

The final score of 10-6 allowed the Grizzlies to progress to the Section Championships Saturday, May 19.