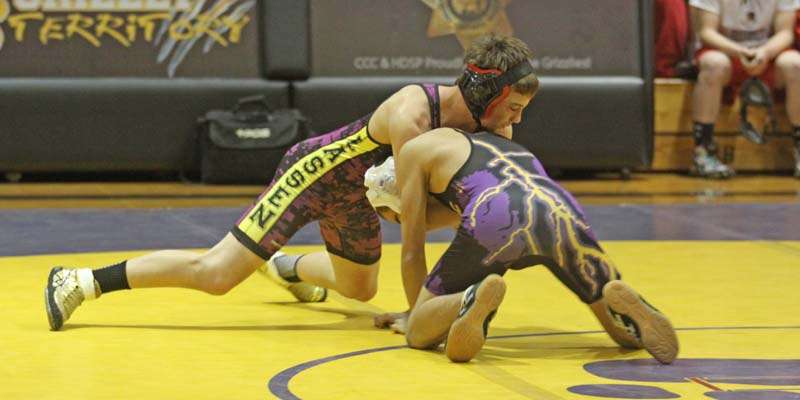 On Wednesday, Nov. 30, the Lassen High Grizzlies hosted a home meet against the Modoc Braves and the Quincy Trojans.

Lassen won both matches with a final score of 48-30 against Modoc and 55-18 against Quincy.

With Lassen initiating the three-match event against Modoc, the night was off to a great start.

Varsity players were in order of increasing weight class and were on the mat prior to junior varsity.

First up for Lassen was Chase Montgomery competing in the 160-pound weight class.

Montgomery gave the Braves a reason to be scared as he earned three individual points via a near fall lasting more than five seconds. However, the match was quickly put to an end as he pinned his opponent and earned six team points via fall.

Next up for Lassen was Dylan Boyer for the 120-pound weight class.

As if the 9-0 individual score wasn’t an impressive-enough feat for Boyer, the Grizzly took action and earned another three points from a reversal 15 seconds into the second period.

Finally, the Brave-torture was put to an end when Boyer pinned his competition 26 seconds into the second period.

Dallen Lee was the next Grizzly facing the Braves. Lee’s gained two-points via reversal 1:10 into the first period. However, Lee’s opponent gave Modoc a name to fight for as Lee was pinned before the end of period one.

David Painter competed next and pinned his opponent with 3.4 seconds remaining of the first period, thus bringing Lassen ahead again 18-12.

Modoc fought for an 18-18 tie as they pitted their Brave against Evan Gibbs for the 145-pound weight class. There were a few reversals and escapes that allowed the points to climb, but the boys acted too quickly to truly keep track. Ultimately, Gibbs was pinned with 8.1 seconds on the board in the first period.

Levi Prater brought Lassen back to glory as he won via fall within the first 35 seconds of the match.

Chandler Monahan put up a great fight for his 160-pound weight class, but his opponent was too driven at the chance to tie up the score.

Modoc gained five individual points in the first period against Monahan via near fall and initial takedown.

The next individual match was brought to a quick finish, as Darrell Miller was ready to take any chances necessary to gain the win.

Miller started out with a quick takedown and soon followed up by taking the risk of rolling on his back to get a better leverage of his opponent. With 22.3 on the board, Modoc fell.

With 30-24 on the board, Modoc might as well given the match away. Little did they know that the St. Andre brothers were making their way to the mat.

Tucker St. Andre followed suit with a viscous takedown that surely left some bruises. With 1:14 on the board, another six points were gained for the Lassen team via Modoc fall.

Varsity finished the Modoc match with 48-30 on the board.

The Quincy Trojans were next to challenge the varsity Grizzlies.

Lassen was at an immediate advantage with a six-point team lead from a forfeit 113-pound weight class.

Camerena’s opponent gave Lassen a glimpse as to the strength Quincy held.

Twenty seconds into the match, Camerena earned two points from a Lassen takedown. Despite the immediate advantage, Camerena began to struggle at the objective of pinning his opponent quickly.

With the start of the second period, Lassen gained another two individual points for a reversal.

Quincy continued its only defense: suctioning to the mat like a starfish fighting the crashing waves.

Quincy continued to squirm toward the out-of-bounds section, hoping to stall the eventual fall as long as possible. At one point, Camerena executed a lift and drag technique while in the advantage position to move both boys back to the center of the circle.

While Quincy was able to survive period two, the Trojan fall could wait no longer. Camerena pinned his opponent with 51.1 seconds on the clock.

Boyer faced the next Trojan head-on. Boyer didn’t want to mess around as he executed a takedown seven seconds into his match and followed up with a pin one minutes and 30 seconds later.

Lee was up next and pinned his opponent before period one even suggested it was close to being over.

Painter was introduced on the mat and decided to play with his prey.

Painter scored a takedown five seconds into the match, but the Trojan was too prideful to beg for a quick defeat.

Period two began with Painter quickly escaping the Trojan, earning another point for his match. Painter reversed the advantage position role and brought the Trojan to a near fall.

The rough-and-tumble period progressed with some bruises showing on Quincy’s side.

With take downs by Lassen and a couple escapes by Quincy, Painter won the match with a final individual score of 14-2.

The major decision brought the team point tally up to 28 to oppose Quincy’s 0.

Next on the mat for Lassen was Hayden Chittock.

Chittock was at a disadvantage early on in the match as blood was shed on the mat from a blow to the nose.

Despite the blood, however, Chittock still gave the match his all. While the boys had to stop multiple times for sanitary cleanup, Chittock squeezed in a couple takedowns and a reversal. The final score was 6-2, Lassen, earning 3 team points for the Grizzlies.

Max Lindeman represented the Grizzlies for the 152-pound weight class. Lindeman struggled with his Trojan counterpart, but with 1:14 on the clock in period two, Lindeman finished Quincy off with a pin.

Jose Martinez faced off against Quincy and earned his first two points via a reversal 65 seconds into the match.

Unfortunately, Quincy was too eager to get a few team points on the board and went in for a pin halfway through the second period.

With 31-6 on the board, Cameron Ingwerson took his place on the mat.

Ingwerson was brutal. The Quincy wrestler hardly had a minute of the match to breathe before Ingwerson finished him with a Quincy fall.

As Ingwerson walked away from his prey, 37-6 shone on the scoreboard and Monahan took his place on the mat.

With a Lassen takedown at 1:40 and a reversal with 10 seconds left, the first period ended 4-2 in Monahan’s advantage.

Period two had a Lassen takedown brining Monahan up to 6 points. With 1:27 remaining of the period, Monahan pinned his opposing Trojan.

A Quincy forfeit gave Lassen an unnecessary boost in points before Bond faced off against his Quincy wrestler.

Bond won against Quincy and handed over the reins to Michael Anaya who competed in the heavyweight division.

Anaya gained advantage position twice and followed up with a reversal within the first period, but with 19.3 seconds left, Lassen fell.

The Lassen-Quincy match was called with a total tally of 55-12, naming Lassen the winner.

The Lassen wrestling team has shown how hard they will work throughout the 2016-2017 season. With two varsity wins under their belt, their next move is to face the league head-on.