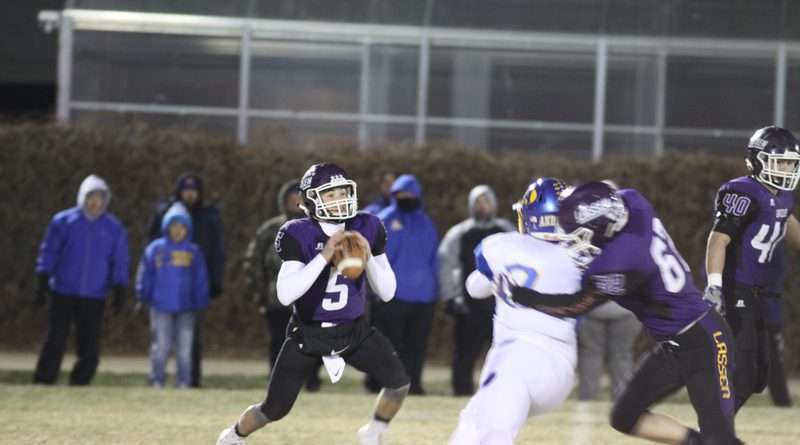 Friday, Nov. 9 saw the Lassen Grizzlies face off against the Anderson Cubs in a NSCIF division III football playoff match at Arnold Field.

This was the second game between the Grizzlies and Cubs this season with the Grizzlies shutting them out 49-0 on Oct. 12. This extreme match up had the Grizzlies finishing on top again at 56-24.

The first quarter had the Grizzlies kicking off to the Cubs. The Cubs’ possession didn’t last long as they had to turn over on downs back to the Grizzlies.

The Grizzlies were able to move the ball up field with Monahan making a 25-yard carry, getting on the 30-yard line, where the Cubs held the Grizzlies offense. On the third down and eight to go, Tucker St. Andre attempted to make a rush for the first down but was tackled in the backfield to bring the Grizzlies to fourth down and 12 to go. This brought the Grizzlies to a punt back to the Anderson Cubs.

Again the Cubs didn’t have a chance to make any major moves with the amazing early game defense by the Grizzlies, only allowing a two-yard gain during the Cubs possession with a quick turnover back to the Grizzlies.

The Grizzlies came back strong on the first play after the return, St. Andre barreled his way through the Anderson defensive line, taking four Anderson linemen to drop St. Andre for a six-yard gain for the Grizzlies.

St. Andre followed that up with a strikingly similar and daring play. On the hand off by Hayden Chittock to St. Andre, St. Andre broke through the middle again finding the hole to make a run for the end zone, with Andersons’ defensive line chasing him, some even hanging on to his jersey dragging behind him. All attempts by Anderson to stop St. Andre were futile as he brought in the first touchdown for the Grizzlies. Anthony Wagner made the kick for the extra point starting the score at 7-0.

On the return kick, Anderson once again got stuck in place. On the first down the Cubs quarter back fumbled the ball on the hike. Though he recovered it, he added eight yards, putting them back 18 yards on the second down. The Cubs were able to make up the eight yards they lost but it was too little too late, on the fourth down they were still 10 yards out from a first down and the Cubs decided on a punt back to the Grizzlies.

The Grizzlies made quick work on first down; with Chittock completing a 30-yard pass to Chandler Monahan, who carried it 15 yards for the touchdown. Wagner made a successful extra point to bring the score to 14-0.

After the kick back to Anderson, the Grizzlies again used their indomitable defense to push back the Cubs’ offense. On Anderson’s first down Kyle Mejia of the Grizzlies broke through the Cubs offensive line to sack the Cubs quarterback adding five yards at the line of scrimmage.

On second down and now 15 yards to go, the Cubs again fumbled and recovered the ball but, unfortunately, added another 10 yards on the line of scrimmage. The Cubs, on the fourth down, had to make it 25-yards for a first down so the Cubs again decided on a punt back to the Grizzlies.

On the first down for the Grizzlies, St. Andre made a big attempt to break through the Anderson line but was stopped short with the Cubs line-up piling on to stop him.

As possession went back to Anderson, the Grizzlies again made their will on defense known, with Memmott and St. Andre only allowing Anderson a single yard gain until they punted back to the Grizzlies after four short downs.

The Grizzlies on the punt return made a quick six-yard gain on the first down. Following that, on the second down, St. Andre came out with another 18-yard rushing touchdown for the Grizzlies with Wagner following that up with a successful extra point. This brought the Grizzlies lead to 28-0 against Anderson.

The kick off back to Anderson essentially started a new game for the Cubs. They were able to finally push past the Grizzly defense and made small yard gains to make their way up field to maneuver in for a touchdown.

Once the Cubs got onto first down and within goal range, the game had a small delay, as the crowd grew loud trying to make note of the bucks making their way across Arnold Field. The commotion startled the deer enough they almost took out one of the referees and almost ran into the Grizzlies on the sideline.

Once the delay due to wildlife ended, the game resumed with Anderson making its first touchdown with a 12-yard rush, and a short kick, missing the extra point, bringing the score to 28-6. This was the first time the Cubs had put any points against the Grizzlies this season.

As the Grizzlies took possession after the kick off, they began to have a tough time with the Anderson defense. Once the Grizzlies were on fourth down, they decided to punt back to Anderson, but an ill-fated fumble on the play put Anderson just 20 yards out from the end zone.

Anderson wasted no time after the turnover with a single incomplete pass on the first down, then a eight yard rush for their second touchdown of the night, and a futile attempt at a two- point conversion, the score narrowing to 28-12 to end the second quarter.

After half-time, the game resumed with the Cubs kicking off to the Grizzlies. After a short battle to get a first down, Chittock made an almost 60-yard pass to Monahan for a touchdown just 30 seconds into the third quarter. Wagner answered back with a successful kick for an extra point, 35-12.

After the kick off back to Anderson, the Cubs made a big error with a fumble on their own 15 yard line for the Grizzlies to swoop in to recover it.

The Grizzlies with just 15 yards to the end zone, saw St. Andre’s fourth touchdown of the night, bringing the Grizzlies score to 41-12, and Wagner widening that with the extra point to 42-12.

With the ball back in the Cubs hands, they again played the small plays making their way towards the end zone. On second and goal Anderson was able to get through the Grizzly defense with a eight yard rush to end in a touchdown, the Cubs again attempted the two point conversion only to be stopped short by Mejia. The Grizzlies maintained the lead with a wide margin 42-18.

With the Grizzlies in possession and on Anderson’s 45 yard line, Chittock found Monahan wide open for a completed 40 yard pass to finish with the Grizzlie’s seventh touchdown and Monahan’s third of the night. Wagner followed up with another successful extra point bringing the score to 49-24.

With less then three minutes on the clock, Anderson again made their way toward the end zone with small plays to make small gains but it worked out, getting them within 20 yards of the end zone. Where on the third down the Cubs made a 10-yard rush into the end zone for their final touchdown of the night, and another failed two-point conversion to keep them behind the Grizzlies 49-24.

By the time the fourth quarter started, the Grizzlies made a final push, while on second down and goal the Grizzlies looked to Robert Howard with a nine yard rush to make the final touchdown for the Grizzlies and one extra point by Wagner to bring the final score to 56-24.

With one playoff win under their belt this season, the Grizzlies faced off against the West Valley Eagles Friday, Nov. 16, in Cottonwood California. Results were unavailable at press time.