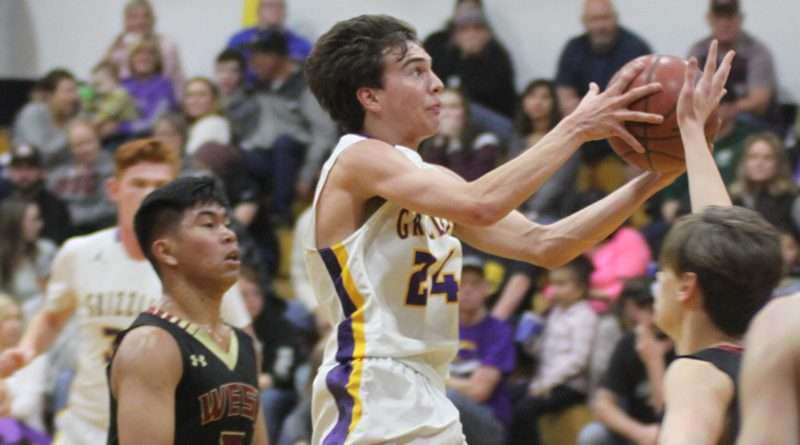 Will Ashmore leaps toward the basket in hopes of hitting yet another two-point field goal during the home game against West Valley. Photo by Ashley Grogan
Sports
January 27, 2018January 31, 2018 Ashley Grogan, Sports Editor

The Lassen High School varsity boys’ basketball team proved that home is certainly where the heart is as they easily took down to visiting teams between Friday, Jan. 12 and Tuesday, Jan. 16 to start the Northern Athletic League with an undefeated record.

Grizzly head coach Paul Moore said, “It was a huge start to the league season by starting 2-0 in league play. We now have five straight road games so we had to start 2-0 to have a chance to win the league.”

The first team to fall victim to Lassen’s overwhelming home support was the West Valley Eagles on Jan. 12. Lassen shooed the Eagles from the cave after a tough game with a 62-50 final score.

The Central Valley Falcons were the next fowl to meet their demise in the cave on Jan. 16. Lassen saw a bit more fight from the Falcons than the Eagles, but ultimately the Grizzlies still emerged on top with a 50-49 score.

Lassen opened against the Eagles with a gymnasium full of fans. The student section was especially pumped up for the game as they pushed the boundaries of school spirit before warm ups were complete.

Once the game was set to start, Spencer Lively took his place at the center of the court to take part in the tip-off. Then, after winning the ball’s favor, a few passes among the Grizzlies resulted in Neil Growdon scoring a basket with more than seven and a half minutes remaining on the clock.

West Valley kept their feathers in the running with a counter basket at 7:03, but Brand Satica regained the lead for the Grizzlies with a basket less than 30 seconds later.

Another basket by Growdon brought the purple and gold to six points by the start of the third minute and after Will Ashmore caught a defensive rebound, Growdon sunk another basket with a hook shot to bring the Grizzlies to eight points.

West Valley finally made their second basket of the evening with 4:41 on the clock, but their whiff of success ended there.

Ashmore stole the ball and sprinted for a basket at 4:14 and two minutes later, Satica faked a layup in order to pass off the ball to Ashmore for the first three-pointer of the game.

With one minute on the clock, Cole Dyer hit a basket to bring the Grizzlies to 15 points and after a basket and good free throw; the West Valley Eagles finished the quarter on the losing end of a 15-7 score.

Quarter two started off with just as much passion as seen in quarter one, as Lively effectively snuck between two Eagles for a pass and layup with 7:34 on the clock, but West Valley was finally ready to get back in the game after witnessing Lively’s success.

A three-pointer, one basket and a good free throw brought the Eagles up to 13 points by the time the clock hit five minutes.

Once the quarter entered the final five minutes, Lively stepped forward once again to score a rebound and a free throw to bring Lassen up to 20 points.

West Valley countered with a three-pointer at 3:19, but Satica followed with the same move with three minutes on the clock.

The Eagles then scored back-to-back three pointers to give the Grizzlies a run for their money.

Satica was the last to score in the first half of the game with another three-pointer at 1:54. After Satica’s success, the score was raised to 26-22, Lassen by the halftime break.

Satica was also the first to score in the third quarter with a rebound at 6:45. Then, at 6:02, Matt Rudd followed with a basket after an underpass from Lively.

A basket by Ashmore brought the Grizzlies up to a 10-point lead, which understandably made the Eagles a tad upset.

Satica landed another three-pointer at 2:55 and Growdon followed with a basket after a jump ball throw-in to bring Lassen to 39 points.

Jacob Bennett then put himself in the limelight with a layup at 1:51 and a three-pointer to follow 33 seconds later.

West Valley then managed a good free throw, but Aaron Barnes shut down the attempt with a basket as the clock reached 12 seconds.

The third quarter ended with Lassen in the lead by 16 and the Eagles feathers becoming more and more flustered.

The final quarter started off on a high not for Lassen yet again as Dyer sunk a two-point field goal at 7:12.

West Valley followed with three good free throws and a rebound basket by the time the clock hit six minutes, but the purple and gold were still in the lead.

Bennett hit a three-pointer at 5:55, and after a West Valley basket, Ashmore and Dyer teamed up to rake in a total of five points between them.

Two good Eagle free throws brought the West Valley boys within reach of 40 points, and after a basket and a three-pointer, they reached and surpassed their goal with a score of 44 on the board.

Bennett and Ashmore each took a turn at the free throw line to bring in a total of three points before the clock hit 2:30.

Then, West Valley hit a good free throw and rebound shot to show they were still in the fight.

Bennett sunk his final three-pointer with less than a minute on the clock, and after a three-pointer by West Valley; the final score was called at 62-56, Lassen High.

Moore stated, “The West Valley game was probably our best overall game of the season. We played amazing defense and held a great, not good, but great three-point shooting team to 25 percent from three. And offensively we were in a very good flow all night.”

The close game against the Central Valley Falcons was down right anxiety inducing for fans on both sides of the court.

Lassen started the game with a clear lead 21-11 by the end of quarter one, but the Falcons were determined to wipe away the 10-point difference with ease.

Central Valley showed their dedication toward winning the game in the second quarter by outscoring Lassen 12-10. However, the Falcons knew they would need to fight with more heart than that if they hoped to win.

The first half of the game was called with 31-23, Grizzlies, on the board, and the Lassen boys welcomed the halftime break with smiles.

The Falcons, annoyed by the Grizzly lead, eagerly wiped the smile from the Grizzly faces by the end of the third quarter as they again outscored the home team, this time by eight points, and thus tied the game 41-41.

With a new sense of purpose, the Grizzlies took on the court with fire back in their steps by the start of quarter four.

Lassen’s defensive plays were the most commendable during the final quarter as the Falcons only managed to score eight points in total. As for the Grizzly offense, nine points were added to the purple and gold by the end of the game to secure the home team the 50-49 win.

Moore commented, “The Central Valley game went down to the final shot so I am sure the fans loved it, but that was way too stressful for me. I was really proud of the fact that things were not going our way late in the game, but we were able to change things and execute down the stretch.”

He later continued, “We are now 12-2 over the last two years at home and I can not tell you how nice it is to have such a big home-court advantage. The crowd really, really helped us with extra energy in both games”

The next game scheduled for Lassen High’s varsity boys will be today, Tuesday, Jan. 23 at U-Prep in Redding, California.

Moore later closed, “The league this year is so balanced every game every night is going to be a close game; I would say five of the six teams have a chance to win the league and no matter who is playing no score will surprise me.”