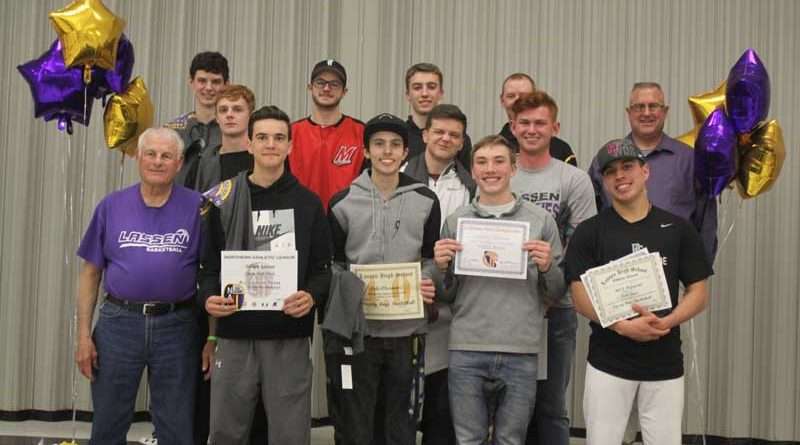 The boys began the evening with a meal and time spent with teammates, friends and family.

Once the awards portion of the evening began, the freshman team was first to take the spotlight.

Dandois announced the players individually and shared an anecdote and a kind word for each athlete.

The freshman Grizzlies had one athlete earn the 4.0 award, and that was Ormachea.

Stewart was honored with the Coaches’ Award due to his hard work both on the court and in the classroom. Dandois mentioned the spirit seen continuously from Stewart as well as Stewart’s eagerness to improve and assist his team.

The Most Improved Award was given to Rivera after a season full of hard work and increased skill seen on the court. Rivera’s focus and skill on the court improved both in practices and under the pressure of games.

After recognizing the freshman team, the junior varsity head coach Dean Growdon and assistant coaches Brad Pon, Allen Sobol and Brandon Whitestone stepped up to recognize their players one by one.

Of the 12 hard-working junior varsity boys, nine were present at the awards ceremony.

The junior varsity boys finished the season as Northern Athletic League Champions with an undefeated league record and an overall record of 12-2.

The junior varsity boys had three 4.0 athletes. Growdon described the achievement as an outstanding success. He explained that he did not realize just how difficult it would be to maintain academic focus until his own son was involved in high school sports.

“Sometimes we didn’t get back until way after dark, and to have to either stay up or wake up early to do homework shows a lot of dedication,” said Growdon.

The three junior varsity boys presented with the 4.0 Award were Sobol, Wolf and Harlow.

The next award was the Coaches’ Award.

Growdon described the award as one presented to an individual who is receptive to coaching suggestions, works hard on the court and is eager to improve himself in whatever ways possible.

This year, there were two Grizzlies who were deserving of the Coaches’ Award: Longabaugh and Fisher.

The Offensive Most Valuable Player Award was presented to Ogburn after a season full of steals, shots and scores that proved to be a large contributor to the Grizzlies’ undefeated league record.

As for the Defensive Most Valuable Player Award, Landon Bennett was honored.

Growdon described Landon Bennett as the individual the coaches would send to block the best player on the opposing team. Landon Bennett kept the other team frustrated with his persistence and would consistently render the opposing star player rather useless.

The Ultimate Grizzly Award is one presented to the athlete who is hardworking and balanced between academics and athletics, as Growdon described.

This year’s Ultimate Grizzly Award was presented to Sobol for his consistent performance on and off the court.

As for overall Most Valuable Player, the junior varsity Grizzly honored was Wolf. Similarly to Sobol, Wolf was also a well-balanced individual who earned one of the 4.0 awards. However, Wolf really stood out to the coaches and his teammates for his undeniable skill in the sport.

The undefeated league champions had a strong season from start to finish.

The final group of boys recognized at the banquet was the varsity Grizzly boys’ team.

Head coach Paul Moore preceded the varsity awards with a thank you to members of the booster board, parents and the many loyal supporters of the Grizzlies.

On to celebrating the boys, Moore said, “This was the first state playoff win since 1988. They finished in the sweet 16 of the state of California — the elite eight of Northern California. The senior class had 40 wins in two years, and this team in 2017-2018 had a school record of 22 wins.”

The first awards presented for the varsity boys were the 4.0 Awards. Moore had nothing but high praise for the three recipients of said award.

The 4.0 students were Neil Growdon, Olexiwits and Ritz.

Neil Growdon was presented with the Coaches’ Award.

Moore commented, “(Neil) always wanted to be first in line. He always hustled. He gets hurt a little too much, but that’s only because he goes so hard. He was an absolute pleasure to coach.”

The next award was the Ultimate Grizzly.

Moore said, “In different sports, I’ve been giving out this award for 25 years, so it’s kind of a special one for me. I call it the Ultimate Grizzly for this reason: If someone were to pick up the dictionary, and there would be a Lassen High basketball player in it, this is what I thought it would look like because they do all the things that you want a player to do. They play hard. They’re coachable. They put in extra time. They are willing to do all the things you ask.”

This year’s Ultimate Grizzly Award was presented to Satica.

Moore commented on Dyer’s consistency on the court and his ability to continuously shadow the most intimidating opposing player in any game.

Jacob Bennett was named the Offensive Most Valuable Player.

“(Jacob) had a great year for us. He had over 40 three-pointers. He was our leading scorer in eight games. He was someone we ran the offense through,” Moore stated.

The Most Valuable Player for the varsity Grizzly boys was Will Ashmore.

Moore said, “(Will) had a great year for us. If you take the entire season into account, he was the leading scorer in the Northern Athletic League at just over 15 points a game. He was the focal point of all the teams we played. I think he’s going on and play for the next level.”

In addition to team awards, the varsity team was also presented with All-League Awards.

Both Jacob Bennett and Ashmore were named to the First Team All-League, and Satica was named All-League Honorable Mention.

The freshman, junior varsity and varsity Grizzlies all had a strong season on the court from start to finish.