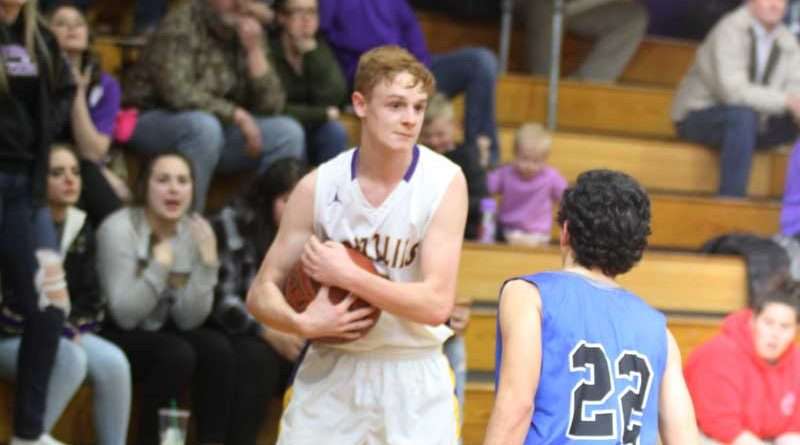 Kenton Ritz protects the ball from an Orland Trojan who has proven privy to stealing the ball during previous interactions while at participating in the first round of playoffs. Photo by Ashley Grogan
Sports
March 2, 2018March 6, 2018 Ashley Grogan, Sports Editor

With 12 teams in the playoff bracket, Lassen played the first round against the last-seeded team, the Orland High School Trojans.

Labeling the playoff game as a Grizzly win is a brief understatement as purple and gold fans could tell by the end of the first half that Lassen had practically guaranteed the win already.

Head coach Paul Moore commented, “Most playoff games are not like this, to win by 32 and be up by over 40. It was great to win again in front of our home crowd. Over the last two years we are now 17-2 at home and it has a lot to do with the great support we have from the student body and the Susanville community and we would just like to thank them for us having such a home court advantage.”

Lassen started out on a high note as Brand Satica won the tip-off without struggle and sent the ball into Grizzly possession.

Cole Dyer was first to grant the Grizzlies points as he successfully sent in a rebound at 7:47.

While the Trojans were on the recovery from the first basket of the game, Will Ashmore didn’t hesitate to steal the ball and hit a layup before the first 45 seconds of the game were finished.

Orland made their first impact on the board with a layup at 5:46, but Neil Growdon quieted the few cheers from Orland supporters with a two-point field goal at 5:21 and a three-pointer from the top of the key at 5:03.

Jacob Bennett followed with a couple good rebounds before the Trojans had another shot to turn the tables.

Though the Trojans certainly tried, the tables remained unturned. Orland managed two two-point field goals by the time the quarter was half-over, but Bennett swiftly replied with a basket at 3:29 to raise the score to 13-6, Lassen.

A pass from Growdon to Dyer resulted in another Grizzly basket at 2:51, and after the Trojans hit their fourth basket of the game, Satica executed a layup.

Orland made their final impact on the score with nearly two minutes on the clock as the Trojans made a layup to bring their score into the double-digits.

Growdon followed the Orland layup with a free throw at 1:16 and Satica hit a layup of his own with less than a minute remaining of the quarter.

The Trojans, already exhausted from seven minutes of rigorous game play, let their guard down while returning the ball after Satica’s basket. Dyer saw his opportunity to steal and took it to hit another Grizzly layup before the ball had exited the key.

With 29 seconds on the clock, Satica intercepted one of the many Trojan passes made along the three-point arc and hit yet another layup to bring the Grizzlies to a 24-10 lead.

Orland was first to break the silence of the second quarter with a couple good free throws.

Bennett responded with an easy layup at 6:22 and was followed by a layup from Ashmore and a basket from Satica.

Orland then hit a three-pointer to boost their confidence, but Bennett brutally ripped said confidence to shreds with two layups in the span of 50 seconds.

Orland responded with a rebound and spirits high, but the Trojans were met with a fierce Ashmore who was willing to fight just to get into the key. Once in, Ashmore tricked the Trojans with a quick pass to Bennett, who finished off the play with a two-point field goal.

Ashmore then executed a layup with 2:39 on the clock.

As if the 38-17 score wasn’t enough to liven the crowd, Jacob Memmott gave a strong swat to block an attempted Trojan layup and completely caused the crowd to cheer without limit at 2:19.

Kenton Ritz entered the game with style as he hit a two-point field goal immediately upon stepping on the court.

Satica followed with a layup 26 seconds later, and decided to keep in the spotlight for the remainder of the half with another two-point field goal made at 0:35 and a free throw to finish the quarter with 45-17 on the board.

Dyer was first to score in the second half with a rebound at 7:37.

Orland responded with a basket at 7:25, but it was the last fans would see of Trojan success for a while.

At 7:13, Bennett landed a three-pointer, paused long enough for Satica to hit a layup, and then hit another three-pointer with ease.

Satica then shot a two-point field goal before deciding to hand over the ball to the visiting Trojans once again.

Orland hit a layup with 5:02 remaining of quarter three.

Memmott then responded with a rebound and was supported by Growdon with another rebound soon afterward.

Orland landed a basket at 4:06 to break up the Grizzly success, but the act wasn’t enough to stop it completely.

Ritz hit another basket with 3:50 on the clock and Memmott supported with a basket less than 40 seconds later.

Orland gained a pinch of motivation, it seemed, as the visiting team hit three three-pointers in a 60-second span, only interrupted once by a layup from Memmott.

The quarter ended with 68-32 on the board, still favoring the home team.

The final quarter saw Hayden Chittock execute a layup at 6:51 to start off the excitement.

Orland responded with a three-pointer to keep their pride intact, but a basket from Cole Olexiwicz and a basket and free throw from Spencer Lively only drowned out the Trojan attempts.

A free throw from Orland brought the visiting team’s tally to 36 points with 4:10 remaining of the game.

Orland then shifted fully into gear with three three-pointers in a row to bring their tally up to 45.

Though the effort was valiant, the act seen from Orland still wasn’t enough to make a dent against the lead Lassen was holding over them.

The final points of the game were credited to the Grizzlies thanks to a layup from Aaron Barnes.

The final score of 77-45, Lassen, definitely gave the Grizzlies something to leap off of when taking on the second round of playoffs Friday, Feb. 23 against Oroville, the fourth-seeded team in the playoffs.

After the game against Orland, Moore said, “Orland was never in the game and we dominated them from the start. I really felt like we could run on them and we did all night. Now it is off to Oroville, a team that beat us in the Oroville tournament. They are a very good defensive team that has some size. Our kids are very exciting about having another chance at them and to keep this season going.”