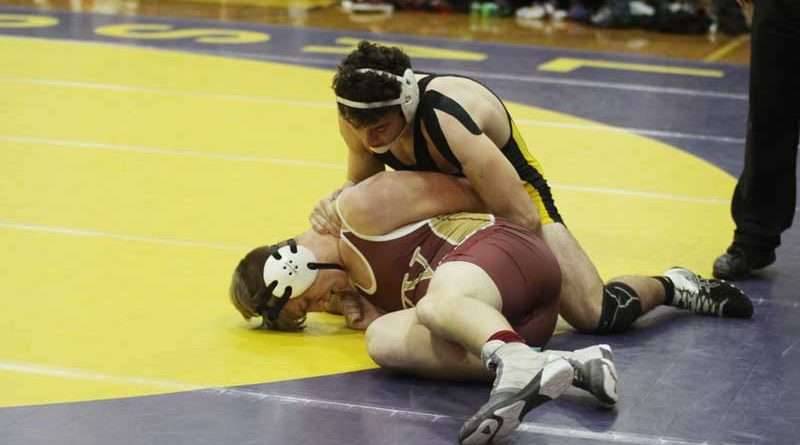 Chandler Monahan attempt to turn his opponent on his back for a pin during the first round of the 182-pound division. Photo by Ashley Grogan
Sports
February 9, 2018February 14, 2018 Ashley Grogan, Sports Editor

The Lassen High School wrestling team showed a lot of strength and technique during the Grizzly-hosted meet against the West Valley Eagles Wednesday, Jan. 30.

Unfortunately, the Grizzlies were unable to secure the win as a team, but many of the individual matches showed great promise in the determined Grizzlies.

First on the mat was Cameron Barton in the 106-pound division.

Barson was ultimately pinned 42 seconds into the second round.

Kris Clements was next to take on the Eagles for the 113-pound division.

Clements showed a lot of speed and technique, but she ultimately fell with 14 seconds remaining of the first round.

Chase Montgomery represented the Lassen High Grizzlies in the 120-pound division, and he was determined to bring his opponent down.

Montgomery earned his first two individual points via takedown six seconds into the first round.

He then earned another two points for a takedown 25 seconds into the second round. Montgomery achieved his second takedown when the Eagle dove for Montgomery and the opportunity to get into the advantage position was available.

Montgomery earned his fifth individual point with an escape at the end of the second round and he was quick to start round three with yet another takedown to bring his tally to seven.

With a 7-0 score on the board by the buzzer’s final ring, Montgomery had earned Lassen their first team points via decision.

The overall team score was brought to 12-3, West Valley as Dylan Boyer took to the mat for the 126-pound division.

Boyer’s match was full of struggle and excitement on both sides as both wrestlers continually tried to gain credit for the takedown. More than a full minute was spent on the ground without either wrestler fully accomplishing a takedown.

With 12 seconds remaining of the first round, Boyer managed to win the fight and found himself in the advantage position with two individual points to his credit.

In the second round, Boyer gained another point via reversal as the clock neared the final 20 seconds, and as the buzzer rang, Boyer was credited with a four-point near fall.

The Eagle wasn’t eager to give up just yet though. In round three, the opposing wrestler wrapped his legs around Boyer’s neck and caused the mat to reset due to an illegal leg pin.

Then, with 20 seconds remaining, the Eagle gained his first individual points via reversal, but after nine seconds, Boyer responded with a reversal of his own to finish the match with a major decision and add another four team points to Lassen’s score.

Miles Ormachea stepped onto the mat next for the 132-pound division.

Ormachea’s match included back-and-forth points as his opposing Eagle proved extremely successful at takedowns, but his strategy for keeping Ormachea down was lacking. Thus, round one consisted of five Eagle takedowns as well as five Grizzly escapes.

However, after the second takedown of the round, Ormachea wasn’t able to escape and ended up pinned with 22 seconds on the clock.

Chase Roby represented the Grizzlies for the 138-pound division.

Roby hit a rough patch, unfortunately, and was taken down and pined prior to the first minute of round one ending.

Next on the mat was Matthew Stout for the 145-pound division.

Stout was taken down with 1:30 remaining of the first round, but he refused to stay down and managed to escape with 1:17 on the clock.

Unfortunately, the Eagle was eager to finish the round on top and was able to successfully take down Stout once more with 53 seconds remaining of the first round.

Then, despite strength and determination, Stout was caught with the Eagle clearly in the advantage. Stout fell with nine seconds remaining in the first round.

The Grizzlies were unable to present wrestlers for the next two divisions, so with two forfeits in the books, the team score reached 42-7 in favor of the visiting Eagles.

Dyllan Goff took to the mat for the 170-pound division.

Goff was another Grizzly wrestler caught in a bad moment, as the Eagle was able to take him down after 32 seconds on the mat. Then, with five seconds remaining of the first round, Goff fell to the Eagle.

The team score had reached 48-7, West Valley, by the time Chandler Monahan stepped on the mat to wrestle in the 182-pound division.

However, Chandler Monahan was determined to interrupt the Grizzly trend.

With 1:44 remaining in the first round, Chandler Monahan clearly overpowered his opposing Eagle as a takedown was credited to the Grizzly.

Then, after effectively ceasing the constant struggle of the Eagle, Chandler Monahan pinned the West Valley wrestler and gained six team points for the purple and gold.

Jared Monahan was next on the mat to take on the Eagles for the 220-pound division.

After a takedown by the Eagle, Jared Monahan managed to escape, but with 14 seconds remaining of the first round, Jared Monahan was pinned and the West Valley score rose to 66-13.

The final team score was 66-19 in West Valley’s favor.