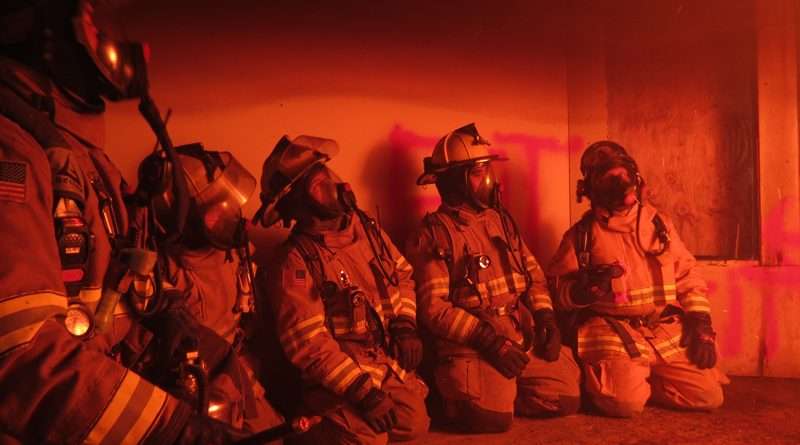 Participating firefighters learn about fire behavior before tackling blazes on both levels of the training house Saturday, May 18. Photos by Makenzie Davis
News
May 28, 2019May 28, 2019 Makenzie Davis, News Editor

The extra weight on my body drove my knees into the hardwood flooring as I was led through the empty Johnstonville Road building on my hands and knees. The helmet, turnouts, air pack and the bulkiness of the suit limited my movements as I attempted to help carry a hose line. I was sweating profusely inside the suit, and I felt helpless when I could barely assist the chief in front of me.

Constantly I was reminded to let my guide know where I was, keep up communication, breath steadily and to never lift my body up.

I was exhausted and the building wasn’t even on fire yet.

From Friday, May 18 to Sunday, May 20, firefighters from all over the county gathered at the empty building for the Fire Control 3A class, where crews immersed themselves in a weekend of live fire training, working toward the hard-to-get 3A certification, which is good for life.

In order to get a small glimpse into the lives of firefighters, the newspaper was invited to join crews as they practiced hose lines and maneuvering around a structure to put out flames quickly and efficiently.

Days after the event, my knees are still bruised, and my shoulders ache from the weight of the gear. Most notably, though, my respect for firefighters who run into burning buildings to save our lives, homes and property, all while being dragged down by the sometimes 50 to 70 pounds of gear has only increased.

There is no profession or service quite like firefighting.

According to the course guide approved and adopted by the Office of State Fire Marshal, “The Fire Control 3A course is designed to develop fundamental skills in combating structure fires by providing the students with a thorough understanding of fire behavior … In many cases, this will be the fire fighter’s first exposure to live structural fire fighting, yet it can also serve as an educational tool for the seasoned fire fighter.”

The three-day course combined firefighters from numerous local agencies to work together on teams, often as they would in mutual aid situations.

Often, crews have to learn about live fires on the go as they happen — but with this training, they won’t have to.

On the first day of training, crews toured the building and became acquainted with the rooms they would soon be extinguishing.

They practiced hose line dry runs, each participant taking a turn at the nozzle. Crews also practiced ventilation and participated in rescue situations where they had to climb a ladder to the second floor of the building, find an incapacitated fire fighter and bring him or her safely down the ladder.

Then, on Saturday, firefighters had a lesson in fire behavior.

Kneeling in a corner room, trainees watched a fire start from ignition to crawling along the ceiling, taking note of how the smoke fills the top of the room and where to aim the hose.

It was then time to put out some fires.

With the various ignition areas always under surveillance by watchful eyes, firefighters practiced finding the intended blaze on both the second and first floors.

Then, after two days of intense training, participants still had another day’s work.

“I know you’re tired and beat up. But you’ve got to dig down deep and give me one more A game day,” Chief of Operations for the evening and Susanville Fire Department Assistant Chief Dan Weaver told the trainees Sunday morning.

Uruburu also addressed the crowd, adding, “Today is the day the fireman is going to come out of everyone.”

And pushing through the exhaustion, the crews quickly worked through the Sunday morning exercises where they were tested on their knowledge of fire behavior, with each group having two runs to put out a blaze on both the top and bottom floors in an unknown room.

They had one shot to find the fire and put it out before quickly retreating and attacking the next blaze.

The value of the training exercise

The process to obtain the necessary permits and get through the “red tape” took about a year and a half, according to Uruburu — but the end result was worth it.

“It went great. I was super excited about it all,” Uruburu said.

There were 52 firefighters in the training who had not been in a live fire situation before, said Uruburu.

Susanville Fire Department volunteer Paulina Baker, who has volunteered for about a year and a half, noted the importance of the training.

Prior to the burn she had not been in a live fire situation before.

“I think (the training) is crucial,” said she. “I know, for me, we do drills but we don’t actually get to train in the fire — so this is perfect.”

She noted the importance of being able to learn about fire behavior in a controlled environment before she’s actually tasked with putting out a blaze affecting someone’s home.

Dave Lee, a Milford firefighter, also shared his positive view of the training.

“It was a blast,” he said. “It keeps us safe, keeps the other firefighters safe and helps us keep the public safe.”

The collaboration of the county agencies also provides assistance, Lee said, because he got to know some of the firefighters he could work beside in mutual aid calls.

“If I know I’ve worked with them at a training, I know they’ve got my back and I’ve got their back,” he said.

Richard Preheim, Standish/ Litchfield captain added knowing other crews have the same training helps in emergency situation and the training was valuable because it teaches firefighters how to read the smoke in the room and what to look for.

Overall, though, this helps firefighters better understand situations they run into.

“Almost every scenario you come across, we train for it,” Jarrett said. “And if it’s something we’re not used to, we look to our superiors.”

A training like this is critical, he added, as it allows crews to “get multiple rounds on it,” so firefighters can get a better grasp on attacking structure blazes.

There were about 20 certificates given out after the training, and department chiefs were allowed to give out about two each to qualifying trainees.

In order to qualify, they had to be present at the training every single day and complete the scenarios.

In order to pull off this large-scale training, the Susan River Fire Department worked with a local family to acquire a building identified by the county as unsafe. The building was set to be abated anyway, and local crews saw the opportunity to use the shell of the structure, which was reinforced with the help of CDCR inmate firefighters, to train local crews.

Chiefs and captains from throughout the county, and basically anyone with live fire experience, helped conduct the training. From the Susanville Fire Department, Chief James Moore ran the holding crew, assistant chief Marc Murphy was in charge of the burn team, Kelly Kennemore headed pump operations and Standish/ Litchfield Chief Mike Fuller was in charge of rehab and medical.

There were also many other captains, chiefs and firefighters who assisted in making the training a success.

Firefighting is a tough job.

Crews don the gear, and go into unknown situations to save our lives and our homes — battling the heat, exhaustion and physical pain.

Repetition is key, and knowledge of fire behavior is an important part of the crews safely extinguishing flames — and trainings like this, especially in actual buildings rather than concrete buildings, allow crews better insight and experience for when the real thing comes along, Uruburu said.

I’m grateful for the many who ensured I was safe last weekend and allowed me to glimpse into the hard life of a firefighter. Should I ever be in a situation where I’m in need of assistance from firefighters, I know I’m in good hands.

Thank you again for this experience, and thank you for keeping us all safe.