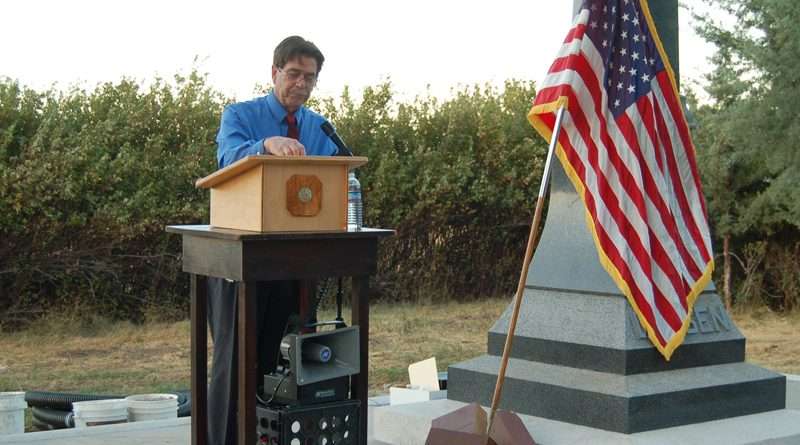 For the second year in a row, Lassen County Superior Court Judge Mark Nareau discussed the United States Constitution and the Bill of Rights during the Lassen Mason’s Lodge No. 149 Constitution Observance Program held at 5:30 p.m. Tuesday, Sept. 18 at the Peter Lassen Monument and Park just outside Susanville.

Nareau addressed a crowd of about 50 members of the local Mason’s Lodge and the Susanville Rotary Club for nearly half an hour from a podium set up between the two monuments to Peter Lassen being improved by Eagle Scout candidates from Troop 159.

“I want to take you back in time as a history lesson because our Constitution and amendments will tell you what life was like back in England under the rule of King George and what the dreams and hopes were for the colonists and patriots,” Nareau said. “As we go through the Constitution and some of the amendments, they’re going to reflect directly what life was like and what that group of men and women who chose freedom found to be the most important aspects of life in the colonies.”

Nareau said the Revolutionary War began in 1775 with “the shot heard round the world” in Lexington and Concord. The conflict began as 700 Redcoats came to seize weapons and ammunition from the colonists.

“Our Declaration of Independence wasn’t written and approved until 1776,” Nareau said, “so we had already started the Revolutionary War before Thomas Jefferson wrote that declaration to King George.”

The U.S. Constitution was written in 1787 and ratified a year later by nine states.

“When we ratified the Constitution, we didn’t have a president yet,” Nareau said. “George Washington became a very reluctant first president of this nation. He wanted to go home and farm, but the pressure was on, and he stepped up.”

Calling the Constitution “one of the greatest written documents of all time,” Nareau said it is “an outline of a government in reaction to living under a monarchy where one monarch made the rules, enforced the rules, made the religion and forced the practice thereof. I think it’s a general reflection of the mind set of our Founding Fathers when the first article deals with the legislative branch, the Congress — the House of Representatives and the Senate. It doesn’t start out with presidential powers. I believe that’s a direct reflection of having lived under a monarchy. The patriots were preoccupied with giving power to the people of the country and not vesting power in the president.”

Nareau said according to the Constitution, the powers of the president are quite limited — “commander in chief of the Army and the Navy and the militias of the states when they are needed. The president has the power to make treaties with the approval of Congress, appoint ambassadors, appoint what they called judges of the Supreme Court and to appoint cabinet members and other officers of the United States. However, the true power in the Constitution is vested with the legislative branch and the judicial branch.”

After the Constitution was written and ratified, the Founding Fathers were very proud of themselves and went back to their respective states “until the people said, ‘Wait a minute, we have the outline of a government, but we have no guarantees of individual rights.’ And that was one of the reasons for the revolution, to have the individual freedoms that the subjects of the king did not have living under British rule.”

In 1791 they reconvened to create the first 10 amendments — the Bill of Rights.

“All of these amendments are a direct reflection of life under a king,” Nareau said. “These 10 Amendments and some that follow are really a reaction to what life was like under British rule.”

The first five rights the Founding Fathers chose to express for personal rights and freedoms, Nareau said, were freedom of religion, freedom of speech and the press, the right to peacefully assembly and to petition the government for a redress of grievances.

“Those were the five rights our Founding Fathers felt had been most infringed upon and inhibited,” Nareau said.

The Second Amendment came about because during the occupation “The British did everything they could to disarm or limit access to arms and ammunition.”

“The Sixth Amendment — the right to a speedy and public trial,” Nareau said. “Remember, back in the day, people would get thrown into the Tower of London and you’d never hear from them again. There was no right to a speedy or public trial or an impartial jury. Again, a direct reflection of what life was like under British rule.”

The Eighth Amendment protects citizens from cruel and unusual punishment.

“Back in England, they were very creative with the way they imposed punishment,” Nareau said. “Drawing and quartering — hooking you up to two horses and yelling giddy up, putting you on a dunking stool and submerging you in a river for five or 10 or 15 minutes, and if you came up alive, you were telling the truth. After 15 minutes there were a lot of liars who died in that river.”

Nareau said the 14th Amendment grants the right of citizenship to all people born in the United States or naturalized as citizens.

“The 14th Amendment also guaranteed due process of law throughout the states,” Nareau said. “All persons born or naturalized and subject to the jurisdiction thereof are citizens of the United States and the state in which they reside. Now, I know that that has a connotation of controversy with it when you hear the term anchor babies. I don’t care for that term, but that wasn’t an issue back then. Anybody born within our territories was a citizen.”

Nareau also said the 14th Amendment provides, “Nor shall any state deny without due process of law, nor deny any person within its jurisdiction the equal protection of the law. I understand that’s also a hot-button topic throughout the country when we see persons who are not citizens who may have a status that is not within the legal parameters and people ask why are they entitled to equal protection? Why are they entitled to constitutional rights? Because our forefathers in the 14th Amendment thought that was necessary. They felt it was necessary we had one system of justice for all humans whether you’re here as a naturalized citizen, you’re born in the U.S.A. or you’re here by some other means. In today’s day and age, that has some connotations with it. But this 14th Amendment was written by people much smarter than me and as a basis for our government, they felt justice should be equal under the law regardless of your status — rich or poor, white of black, citizen or noncitizen.”

“Think about that for a minute,” Nareau said. “The Constitution is a direct reflection of who we are and the ideals of this country and how this country was founded. It’s not perfect, and sometimes when it doesn’t work for a particular person, they’re not happy with it. But it’s one of the greatest documents I’ve ever read — along with the Declaration of Independence and one other book. But it shows you how far we’ve come and how advanced our Founding Fathers and Mothers were in their thinking of what would form a more perfect union. We knew that the monarchy didn’t work. It didn’t work for us. It didn’t work for our style. It didn’t work for our patriotism. But the system of government we have now, with checks and balances, where we don’t have an all-powerful president or an all-powerful monarch, where the Constitution started and gave most of the power to the Congress because the Congress represents the people. And it’s the people, and the majority of the people who rule. I think it’s an incredible example of insight and foresight that created a government that’s not perfect, but it allows us more freedoms and more liberties than any country in this world, and I think it’s what makes this country absolutely the greatest in the world.”