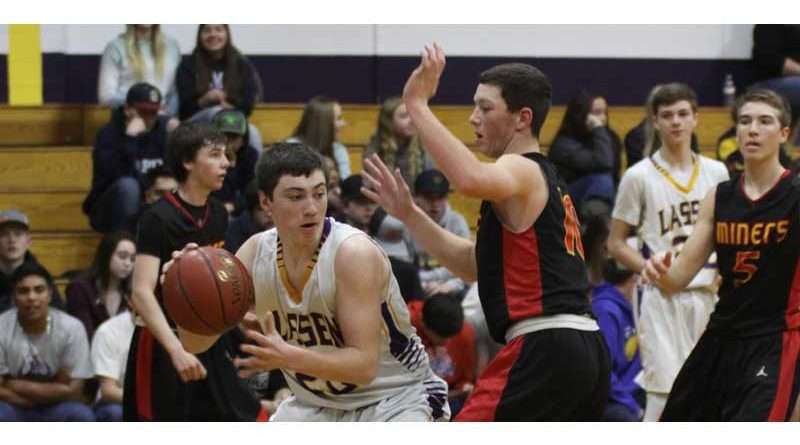 The Lassen High School junior varsity boys’ basketball team decided to end their 2017-2018 season with a pinch of spice as the Friday, Feb. 16 Winterfest game against the Yreka Miners entered overtime.

The boys initially tied with the Miners 72-72 by the sound of the fourth quarter’s buzzer. With a wild crowd erupting in cheers of disbelief and support, the Grizzlies then entered overtime with raw determination and left with the 85-76 win.

The Miners started off with the lead as a couple good free throws broke the initial scoreless tie five seconds into the game.

However, Lassen was eager to respond with a two-point field goal by Ryan DelCarlo at 7:37 and a layup from Sean Longabaugh at 7:07.

Yreka bumped themselves back into the lead with a three-pointer less than 90 seconds into the game, but Brock Wolf was quick to put the Miners back in their place with a basket and a three-pointer prior to the clock reaching 5:30.

The Miners contributed a three-pointer in response and then proceeded to completely take over the court.

Yreka had established a strong lead prior to the quarter entering its final two minutes. A total of two three-pointers and two two-point field goals brought the Miners to 18 points.

A hook shot and a good free throw from Aaron Ogburn served to interrupt the Yreka streak, but it wasn’t enough to steal the lead.

Lassen’s Skyler Sobol and Ogburn brought in a total of six points prior to the quarter being called, but the Yreka response of five points in the same span ensured Lassen wouldn’t finish the quarter on top.

A score of 23-19, Yreka, shone on the board as the first quarter ended and the second began. However, Yreka was quick to change the score with a layup and a three-pointer to fully establish their supposed dominance on the court.

Ogburn responded to the Miner arrogance with a couple free throws, but the Grizzly attempt was dismissed after a rebound from the Miners brought Yreka into a 30-21 lead.

Visibly frustrated, Ogburn responded with two layups in a row and passed along the spotlight to Sobol, who landed a two-point field goal as the clock hit five minutes.

Yreka put in a basket at 3:57, but Lassen’s Wolf countered with a basket of his own as well as a good free throw to follow.

The Miners then hit a final basket for the first half at 3:31, but the purple and gold were not yet ready to wave the white flag.

In the final three minutes of the second quarter, DelCarlo hit one basket to bring the Grizzlies to 30 points, and Wolf followed with a two-point field goal.

With a disadvantage of only two points, the Grizzlies were determined to step it up in the second half.

Wolf stole the lead within the first 40 seconds of the quarter as he sunk a three-pointer with ease.

Yreka stole the lead back with a two-point field goal, but Ogburn wouldn’t let the Miner celebration last as he sunk a three-pointer and two free throws to send the score to 40-36, Lassen.

Longabaugh granted another two points to the Grizzly score via free throws, and after the Miners raked in three points, Lowgan Fisher followed up with a layup.

The Yreka boys kept themselves in the game with a two-point field goal at 3:36, but Fisher fought for the Grizzlies and brought in another three points before the clock hit 2:30.

Five points were added to the Yreka score due to a basket and multiple free throws as the quarter entered the final 65 seconds, but Lassen gained the same with two baskets and a free throw prior to the quarter’s end.

The last score of the third quarter was a two-point field goal by the Miners with four seconds on the clock.

The fourth quarter began with the Grizzlies in the lead 52-48, but the Miners were quick to tie things up 52-all in the first 33 seconds.

After the score hit the tie, the remainder of the quarter consisted of punches back and forth without mercy.

Wolf hit a basket at 7:05, but Yreka responded with one at 6:44. Then, Ogburn was at the free throw line a mere seven seconds before the Miners mimicked the act.

Yreka stole the lead and seemed eager to keep it by the time the clock hit 4:40 as the score was 63-58 in Miner favor, but Lassen wasn’t giving up just yet.

Fisher hit a rebound with 4:21 on the clock and Longabaugh followed with a couple free throws to bring the score to 63-62, Yreka.

Two good Miner free throws gave Yreka a bit of a buffer, but the Grizzlies retaliated with a hook shot from Ogburn and a jump ball shot from Fisher to steal the lead 66-65.

With hardly more than two minutes on the clock, Yreka stole the single-point lead with a basket, but Fisher took it back with a layup.

Yreka gave a final effort at the win with a basket with 42 seconds remaining of the quarter; however, Ogburn countered with a layup at 27 seconds and the 72-72 score remained on the board until the buzzer rang.

Fisher was first to act in overtime as his basket with 3:33 remaining gave the crowd a reason to cheer.

Yreka countered with a couple free throws to tie things up, but Wolf was quick with a rebound.

Three free throws were made in the final 60 seconds of the game, courtesy of Longabaugh and Ogborn, and thus the game finally met it’s end with 85-76 on the board.

The game, much like the season, was a wild ride from start to finish. But the Grizzlies insured to end things on top to bring their league record to 6-0 and their overall record to 12-2 before signing off.