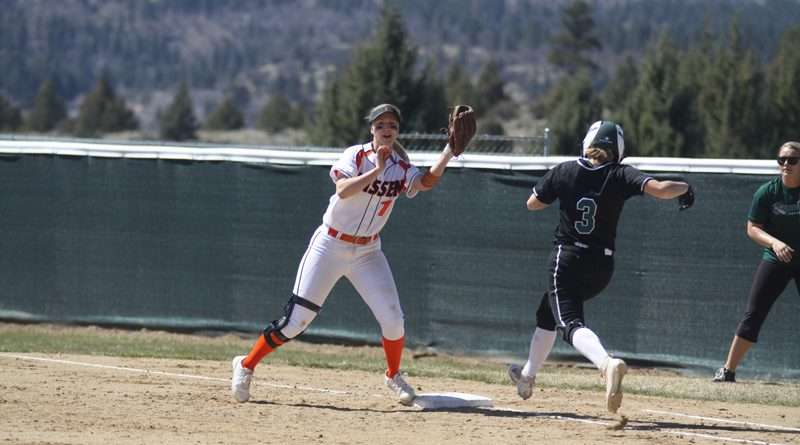 Lassen lost the first game against the Siskiyous Eagles with a 10-1 score that ended the match in five innings.

However, Lassen was quick to bounce back with an 8-7 victory to end the second game in eight innings.

Then, Lassen started and ended strong against the Shasta Knights with a 2-1 win ending the first game and an 8-5 win finishing off the second.

During the first game against Shasta, Lassen had a total of one hit throughout the game. The batter responsible was Hanna Ramirez in the first inning. After reaching first base, Ramirez stole second, stole third and finally came home thanks to a sacrifice fly by Mia Torres.

In the second, the Eagles again stepped it up while at bat with three additional runs scored.

Lassen was unable to respond.

The Lady Cougars did, however, keep the Siskiyous from returning home in both the third and fourth inning.

The fifth inning saw the Eagles exude all of their power as the visiting team managed to score an additional five runs to bring the score to 10-1 and thus win the game.

Game two proved to be a fresh start for the Cougars, however, as the women brushed off the mishaps of the first game and played hard without holding back.

Lassen initially gained the lead in the bottom of the first with three runs scored.

Siskiyous was unable to respond until the fourth inning. The Eagles brought in five runs in the span of one inning, but the Cougars responded with a run in the bottom of the fourth.

Though the Eagles were in the lead with a score of 5-4, the Cougars refused to lose hope.

During the bottom of the fifth, the Cougars tied things up 5-all with a run.

Innings six and seven ran their course without a run scored by either side. Thus, the ladies started an eighth inning without any sign of fatigue.

The winning run was made by Myrissa Geer with RBI credited to Chamberlain due to a fielder’s choice hit to win the game.

Lassen had a total of eight runs with 13 hits and two walks.

Mia Torres topped the charts in hits with three to her credit, including a triple. Maddie Camacho hit one triple, as did Jill Smith, and Christina Torres hit two doubles. Ramirez also hit a double.

Mia Torres and Ramirez each scored two runs and Camacho, Chamberlain, Christina Torres and Geer each had one run.

On the mound for the Cougars was Sabrina Johnson with 37 batters faced. Johnson had six strikeouts and gave up eight hits, seven runs and two walks.

Regarding the games against the Siskiyous, head coach Jo Koons said, “We fought back … I’m proud of them and how they stepped up and competed. We fought until the very end and it ended in our favor. It’s good momentum going into (Wednesday).”

Koons later stated, “I’m happy we were able to come back in game two as a whole team and compete. Sabrina (Johnson) threw an excellent game, and shut down the Siskiyous offense. We had a rough game in the field, so we will look to improve on that side of the game moving forward. Several of our hitters stepped up in game two, and showed what we we’re capable of. I’m excited for the rest of conference games moving forward.”

While still on the adrenaline high, the Cougars were more than ready to host the Shasta Knights for the doubleheader on Wednesday.

The Knights were ill-prepared to take on the Cougars, as the Lassen wins of 2-1 and 8-5 proved.

Lassen, on the other hand, did not waste any time.

Inning one began with Camacho hitting a single and stealing second while Chamberlain was at bat.

After Camacho stole third on a wild pitch, Christina Torres followed through with her promise by hitting a double and bringing Camacho in.

The score thus showed 1-0, Lassen, by the end of the first inning.

Inning two saw a Knight strikeout and not a single Shasta lady make it home.

Lassen kept at it, though. Ramirez walked to reach first, and with Smith at bat, Ramirez stole second.

Smith then singled and Ramirez took the opportunity to book it home.

A double play sent the Cougars back to the field, but it wouldn’t be long before they were back at bat yet again.

Lassen wasn’t able to add to their score for the remainder of the game, but their performance on the field was stellar from start to finish.

The only Shasta run was scored during the top of the sixth inning.

Johnson was again on the mound for the entire duration of the game. She had five strikeouts and gave up five hits, one run and two walks.

Game two saw a tad more action from the Knights as they managed a total of five runs, but the Cougars still outshined them with eight runs to their credit.

The Knights were first to score with two runs in the first inning.

Lassen didn’t impact their score until the bottom of the second, in which they brought in three runs.

The Knights stole the lead for the final time during the top of the third with two runs, but Lassen responded with four to secure the lead and the win.

In the bottom of the fourth, Lassen brought in one more run, and after a Shasta run in the sixth inning, the game was called with Lassen in the lead.

The Cougars will be taking on the Feather River College Golden Eagles today, Tuesday, April 3 for a doubleheader.

The next home game for the Lady Cougars will be this Saturday, April 7 against the College of the Redwoods.