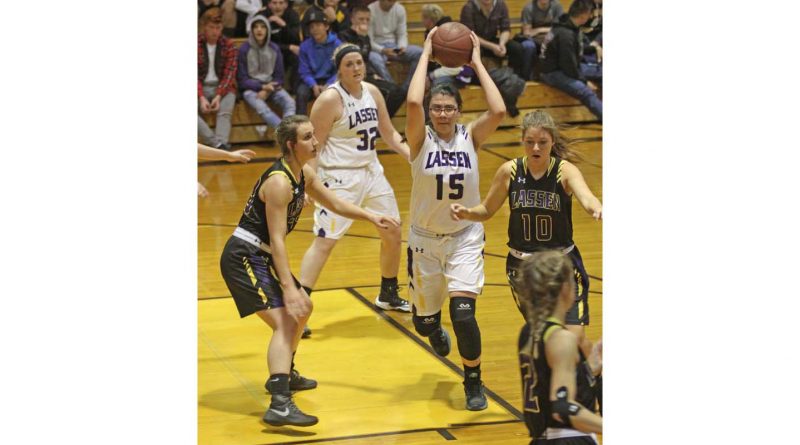 The fundraiser was a huge hit among the community as the night consisted of a scrimmage among each of the three teams, a raffle and an auction.

The games gave the girls time on the court as well as gave the parents and other community members the ability to see the girls in action prior to the season’s start.

The three teams are freshman, junior varsity and varsity. Each team was divided into two sub-teams for the fundraiser: one in purple and one in white.

The freshman game was kicked off by a basket by Shassi Wengu with 8:50 on the board. The purple team was at the advantage.

Caitlyn Crosby tied up the score by shooting a basket for the white side with 6:45 on the board.

Wengu was back at it less than 30 seconds later with a three-point basket for purple.

Hannah Langenhorst showed off her value between minute four and seven with two baskets for the white team.

Taylor Greer bumped up the white lead by another three points after her shot at 2:54, leaving the crowd to cheer louder than before.

Grace Gatie finished off the half with a basket at 2:22 giving the white an 11-5 lead.

The first raffle tickets of the night were called out during the freshman halftime to make audience members even happier to be present for the evening’s events.

The second half was kicked off in the same way the first was finished; Gatie made another basket for the white team.

Purple made a slight comeback with 4:41 remaining of the game by putting Sam Magarrell in charge of the ball. Magarrell scored a basket and bumped up the purple points to seven.

Crosby gave the crowd something to cheer for as he scored a three-pointer with less than five minutes to go.

Jewel Kerby then finished off the game with a solid win for white via basket with 44 seconds on the clock.

The freshman game was finished off with a score of 18-7 on the board favoring the white team.

More desserts were raffled as the junior varsity team prepared to start their scrimmage.

As the freshman took their places among the crowd, it was easy to see parents beaming with pride for the season yet to come.

The junior varsity team was a tad short on players, so freshmen Jaycee Ballard and Magarrell were able to sub into the game as needed for their junior varsity peers.

With 8:37 on the board, Magarrell was the first to score for the white team.

Grace Memmott quickly tied up the score with a basket at 8:14.

Ellie Stewart brought the white team back in the lead with a basket four minutes into the half, but Shelby Anderson quickly put purple to the advantage with a three-point shot less than 20 seconds later.

Stewart brought up the white score with 4:41 on the board and then handed the game over to Allyza Andrade.

Andrade proceeded to score four points within 35 seconds of one another and then proceeded to make a free throw shot 30 seconds after that.

As if that wasn’t enough, Hannah Wallace received a pass from Andrade to make another two points with 1:47 on the board.

Stewart came back into play and scored another two points with 34 seconds on the board.

The end of the first half had 16-5 on the board favoring the white team.

With more desserts raffled off, there were many happy campers enjoying the fundraiser.

Purple kicked off the second half with a basket by Chelsea Williams with 9:27 on the board.

White then dominated yet again with a six-point gain via baskets by Stewart, Magarrell and Andrade.

Grace Memmott followed with a basket two minutes on the board.

Kayla Downs then awarded purple with another three points via basket and free throw with 42 seconds on the clock.

The 18th purple point, and the final point of the game, was made by Emma Newton via a basket with 12 seconds remaining of the game.

Junior varsity was finished with a final score of 25-18 on the board once again favoring the white team.

Prior to the varsity team storming the court, the event held an auction. With spirit baskets and a warm up with the Lady Grizzlies provided by the team and items such as dinner, a quilt and two rounds of golf provided by sponsors of the team, the auction had a lot of bidding activity.

It was a winning night for everyone.

The varsity team took the court with the echo of cheers behind them as they passed.

The first points of the varsity game were made by Jaz Brussatoi for the white team as 8:51 shined on the board.

Hannah Carson countered with a basket for purple 30 seconds later.

Jamie Larson made the first free throw of the game with 8:10 remaining of the half. Larson’s shot brought the white team up to three points in total.

Ava Steele was next in the limelight as her basket brought purple into the lead with four points.

With 7:24 on the board, Madee Cluck put white back on top with a basket.

Brynn Winters gave white some breathing room with another basket at 6:02.

Brussatoi was the first to make a three-point shot at 2:06 and caused the announcer to say with astonishment, “that swoosh.”

Maddie Hampton brought white up to 12 points with a basket from her own rebound with 30 seconds on the clock.

The first half came to an end with 12-4 on the board favoring the white team.

Larson started off the second half with a basket for the white team only 30 seconds into the half.

Gracie McCoy gave the purple its fifth and sixth point via basket at 8:32.

Not but four seconds later, Lainey Nevis granted another two points to the white team via lightning fast basket skills.

Steele was back in for purple and scored a basket with 8:09 remaining of the game.

McCoy, determined to get purple back on top, shot another basket at 7:41.

Steele then returned with another purple basket less than three minutes into the half.

Carson then solidified a tie with two baskets hardly a minute apart from one another.

Hampton took the threat to the white win seriously as she countered with a basket with 4:22 on the clock. She then made a free throw bringing the score up to 19-16.

Brussatoi shot another three-pointer with 2:32 on the board, bringing white to the lead by six points.

Dani Nevis took a stand for purple and shot a basket at 2:14.

Hampton quickly countered with a three-pointer, however, with 1:20 to go.

Carson used the last minute of the game to score four points for the purple team via baskets.

While this was the closest game of the night, varsity white still won 25-22.

Coach Jessica Larson commented, “I’m looking forward to a really great season with all three teams,” after seeing how hard the girls had worked at the fundraiser.

In all three scrimmages the white team won. Is this an omen for the fate of home games? Could the Grizzlies be entering a loss-less season?

The first game for the Grizzlies will be held during the Reno Tournament from Thursday, Dec. 1 through Saturday, Dec. 3.