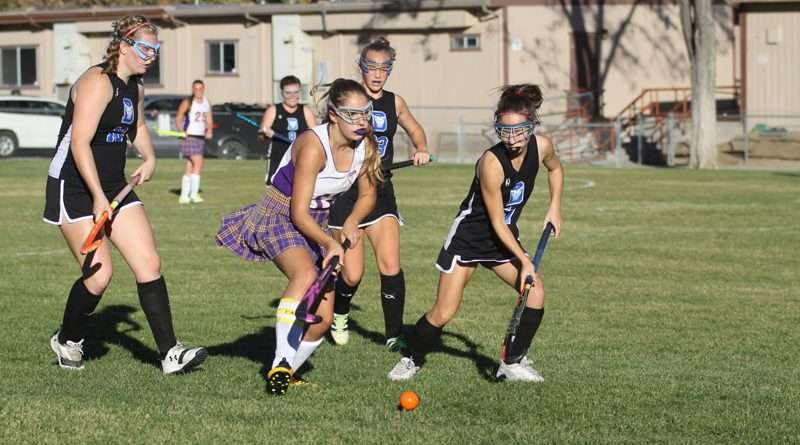 The final game of the season was ultimately a 4-0 loss for Lassen, but the Lady Grizzlies still finished the season strong regardless as to the game’s outcome.

Lassen started the game off on fire as the first four minutes were spent entirely in Davis territory, thus causing the Blue Devils to truly step up their game.

Two minutes and 50 seconds into the first half, Melanie Gatie relentlessly dribbled the ball into the Blue Devil circle and attempted a shot on goal, but a slide from the Davis goalie kept the cage clear.

Once the game entered minute five, the Blue Devils managed to not only cross the 50-yard line, but also enter Lassen’s circle. Though a brief moment of panic rushed through the Lady Grizzlies, they handled themselves well and hurriedly drove the ball back into Blue Devil territory once again.

Unfortunately, once the Blue Devils got a taste of what it felt like to be within the Grizzly circle, they became addicted. The ball found it’s way back toward the Grizzly goal not long after reentering Davis territory.

Grizzly defense was on top of it, though, as Bayley Packard cleared the circle. Savannah Huskey then brought the ball past the 50 yet again before passing to Sara Gardiner. Gardiner and Emma Newton kept the passes consistent between one another until finally reentering the Davis circle with 22 minutes remaining of the half.

The Blue Devils earned their first short corner at 20:35, and from then on, it became a compulsion. Another short corner for Davis was called at 18:40, and another at 18:11.

However, upon starting the third short, Kara Hahn rushed the ball brilliantly and cleared the circle.

Though Hahn’s actions definitely broke Davis’ concentration, it didn’t stop the Blue Devil aggressiveness. With 15:45 remaining of the half, Davis scored their first goal of the game.

Less than a minute after resetting the field and starting the next battle for a goal, Davis earned yet another short corner.

This time, Gatie was on top of the defensive line as she cleared the circle and helped the ball not only cross the line, but also approach the Davis goal at an alarming speed.

Lassen earned their first short corner with 13:15 remaining of the half, and while there was definitely a shot on goal, the Blue Devil goalie kept it away from the cage.

Lassen earned a second short corner with 12:47 on the clock, but upon starting, the Davis ladies not only cleared the circle, but also crossed the 50-yard line.

Davis retook the ball and entered the Grizzly circle yet again. But, upon their shot on goal, goalie Kris Clements was quick on her toes to clear the circle at 9:20.

A play starting with Cluck, passed to Newton and ending with Huskey successfully crosses the 50-yard line and approaches the Davis 16-yard line. Unfortunately, the Davis defense was eager for the action and wasted no time passing it to the waiting offensive players.

Clements cleared another ball with six minutes on the clock, and again with four minutes remaining.

Davis earned another two short corners before the half’s end, but the Grizzly defense kept the score at 1-0, Blue Devils until the halftime break.

Upon starting the second half, the Blue Devils were as fired up as ever before. They entered Lassen’s circle within the first minute, but Hahn was quick on the draw yet again and cleared the circle.

After another minute and a half, Davis reentered Lassen’s circle and attempted another goal, but Clements was quick to save.

Davis then earned another short corner, and with 26 minutes remaining of the game, the Blue Devils made their second goal.

After resetting the field again, Davis was quick to earn more short corners as the Lady Grizzlies were not just fatigued, but also extremely passionate. Obstructions, hacks and foot calls were made against the Grizzlies while in their own circle, thus the Blue Devils earned three short corners prior to a timeout being called at 18:40.

Another two short corners were awarded in the next five minutes of game play, but Clements countered with two saves to keep the Blue Devils at bay for as long as possible.

Clements truly proved herself to be the star of the Grizzly defensive line, especially in the second half. She cleared the ball again at 12:40, and once provided an opening, the Grizzlies were quick to rush the ball to Davis’ circle.

Lassen earned their next short corner with less than 10 minutes remaining of the game. While there were three near-goals, none of them made it into the cage.

Clements saved another ball at 8:14, and with a strong pass to Cluck, the ball made it’s way toward and across the 50 yet again. Gatie received the ball from cluck before passing to Gardiner, but it didn’t take long before Clements was put back to work.

Packard and Isabella Geoia showed strong defensive traits with four minutes remaining of the game, as both Lady Grizzlies stayed near the 50 to stop any hard drives or strong passes made by the Blue Devils. After several blocks, though, Davis managed to get past both Lassen ladies.

Clements saved the ball for what she hoped was the final time at 3:15, and with the knowledge that the end was near, Lassen offense completely erupted with the hunger for a goal.

The Lady Grizzlies sprinted the ball down the field and brought the ball within inches of the cage multiple times, but with the adrenaline rush slightly fading, Davis took the opportunity to steal the ball back.

Davis earned a short corner with 1:28 on the clock, much to Clements’ dismay, and the Blue Devils continued to earn them until their final goal was made. Between the 1:28 short corner and the one resulting in a goal, the teams underwent four of the same play. Though the time ran out minutes prior to the goal, the lack of cleared circle kept the ball in play.

The game was called with 4-0 in the books, favoring Davis.

Though the Grizzlies lost the last official game, they headed off to the post-season tournament Saturday, Oct. 28 to finish their time as a team on a good note.