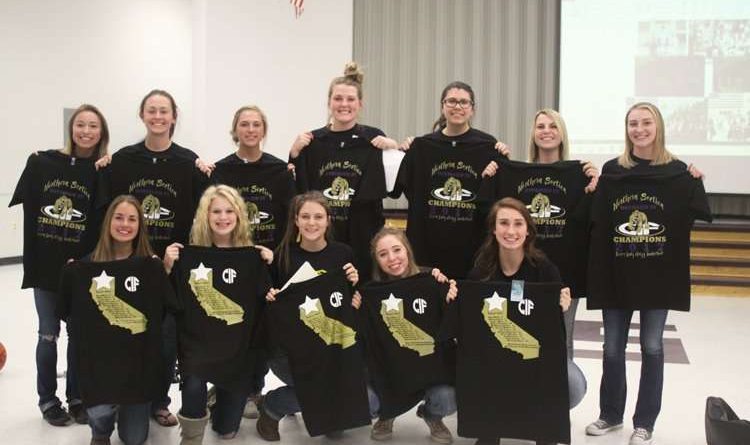 The 2017-2016 Lady Grizz varsity team receive shirts to highlight their success as Northern Section Champions. Dani Nevis, back left, Ava Steele, Lainey Nevis, Jamie Larson, Brynn Winters, Jaz Brussatoi and Hannah Carson display the front of the shirt. Madee Cluck, front left, Maddie Hampton, Bayley Packard, Gracie McCoy and Makenna Busse display the back of the shirt with an image of the patch each girl received at the section championship game as well as the names and jersey numbers of each girl on the team. Photo by Ashley Grogan
Sports
April 17, 2017October 26, 2017 Ashley Grogan, Sports Editor

With a great basketball season officially behind them, the Lassen High School girls’ basketball teams drew their time together to a close with a celebratory banquet held Thursday, March 30.

The freshman team’s head coach Tyana Zinn started off the banquet with awards for her squad.

The 2016-2017 season was Zinn’s first for coaching. She described her team as the best group of girls she could have asked for.

Most Inspirational was awarded to Jewel Kerby for her unending ability to lift the team’s spirits.

Dania Tynan earned the Most Improved Award after her season of dedication on the court.

Samantha Magarrell was honored with the MVP Award. Zinn said, “She was always there. She’s a valuable player and I know she’ll go far. I can’t say enough good about her.”

The team voted for the previously mentioned five awards, but the Coaches’ Award ¾ referred to as the Ultimate Grizzly Award by the three girls’ basketball teams ¾ was selected by Zinn and the team’s assistant coach Dorinda Shaffer.

The 2016-2017 Ultimate Grizzly Award for the freshman team was Caitlyn Crosby. Zinn explained that Crosby was selected for her dedication to the sport as she was continuously on time, ready to play and eager to improve.

Each girl on the team was given a certificate and shirt, as well as cake pops as a personal touch from Zinn.

The junior varsity head coach Tony Amero started off his team’s recognitions by letting parents know that his team worked hard throughout the season, and they showed heart and passion both on and off the court.

Ellie Stewart was the first honoree with a 4.0 GPA Award on behalf of her hard work in class as well as on the court.

Stewart also earned the Best Offense Award. Amero commented on Stewart’s growth throughout the 2016-2017 season regarding technique and offensive strategy.

Best Defense Award was presented to Allyza Andrade. Amero said, “She’s just this defensive stud who is all over the place. She has a motor that doesn’t quit. She runs from start to end. She understands her role, and she also understands when to step out of that role. She’s an all-around great kid.”

Becky Stewart was honored with the Most Inspirational Award. “She was always motivated. She loves the game. This is the kid you want on your team,” Amero said. “And it doesn’t stop on the court. On the bench, she’s involved in the game. She’s the first one up to cheer for the girls.”

The Most Improved Award was given to Hailey Mena for her increase in ball control and confidence on the court.

Shelby Anderson received the MVP Award. Amero said, “She is a natural leader. She takes this team and takes every single kid under her wing. She recognizes when she needs to get kids in the game or when she just needs to pick them up.”

Emma Newton was named Ultimate Grizzly for the junior varsity team. Amero said, “She could play big, she could play guard, she could play point, she could be the shooting guard, a three-yard. She’s kind of a do-it-all, really a coach’s dream to be honest. She doesn’t complain and she shows up every day. She was just a joy to have.”

Each girl on the junior varsity team received certificates and shirts, as well as a backpack from Amero.

Varsity’s head coach Jessica Larson initiated her team’s awards by pointing out their great successes for the 2016-2017 season.

The varsity team’s record for this season was 20-10. In addition, this season’s team was the third in Lassen High history to earn the section champion title for girls’ basketball.

Brynn Winters was the first to be honored with the only 4.0 GPA Award for the varsity team.

Maddie Hampton was voted Best Defensive Player. Larson said, “She is an outstanding all-around player and person. She always has a smile on her face. Most of the games she played in she scored in double digits. She is completely fearless underneath there.” Hampton had 51 steals throughout the season.

Ava Steele received the Most Improved Award. Larson said, “The one thing I was worried about Ava was being tenacious all the time. She has turned around as a player and a person incredibly. She’s incredible.” Steele ended the season with 138 points. She was third in the team for rebounds with a total of 127.

Jaz Brussatoi earned the Most Inspirational Award. Larson said, “Jaz is our joy, our leader, and our bright smile.” Brussatoi finished the season with 30 steals.

Larson later said, “It didn’t matter whether we won or lost, whether we were upset or not, at the end in every locker room, Jaz had us cheer family. That’s what we were. We were, we will, we will always be family.”

Hannah Carson was named MVP. Larson said, “Hannah Carson, can you say amazing defense and fast and steals? Her all-around play, she has just been an amazing player this year.” Carson was the second leading scorer of the team with 218 points for the season. Carson also had 128 rebounds, 84 steals and 48 assists.

Gracie McCoy earned the Best Offense Award. Larson said, “She is a tremendous leader on and off the court. Gracie was sure everyone was included and everyone felt loved.”

Regarding McCoy’s stats, Larson said, “In her last games: Gridley, Gracie has 19 points; Willows at home, 21 points; U-Prep at Sections, 15 points; and St. Patrick’s at home, 17 points.” Overall, McCoy had 208 points. She was also the number one in steals and assists with 93 steals and 54 assists.

Brynn Winters earned the Ultimate Grizzly Award for the varsity team. Larson said, “She’s always been amazing. She just decided she was going to have fun and be amazing this year.”

Winters made 117 points in the 2016-2017 season as well as 107 rebounds. Winters led the team in blocks by a landslide with a total of 49; her blocks were a key factor in her season nickname of Brynn the Beast.

Makenna Busse was voted NAL All-League First Team by the coaches of the Northern Athletic League. Larson said, “She definitely has to continue her career. She’s an awesome athlete and person and I’m very blessed to have been able to coach (her) for the past three years.”

Busse finished the season first in points with 254 scored. She also led the team in rebounds with 257. Busse was the third highest player in steals with 76 for the season.

McCoy was voted as an NAL All-League Player by the coaches of the league.

Each varsity girl received a certificate, a shirt with their Northern Section Champion title advertised as well as their names, and a homemade book with a collection of their memories from the 2016-2017 season.

Busse then took the microphone to carry on a tradition of acknowledging a junior on the team to lead the varsity girls for the following season.

Busse said, “Through this entire season, I’ve been looking for a junior to give this to. They have to give it 110 percent, they have to have a great attitude all the time, they can’t be the player who looks back on a game and just dreads on it and they have to just push forward.”

Upon giving Nevis the ball used to symbolize the award, Busse told her, “When I give you this ball, I expect you to lead the team with everything next year.”

The girls ended a fantastic year knowing that the following year’s teams will have big footsteps to fill, but the looks in each player’s eyes proved that the Lady Grizz girls were up to the challenge.