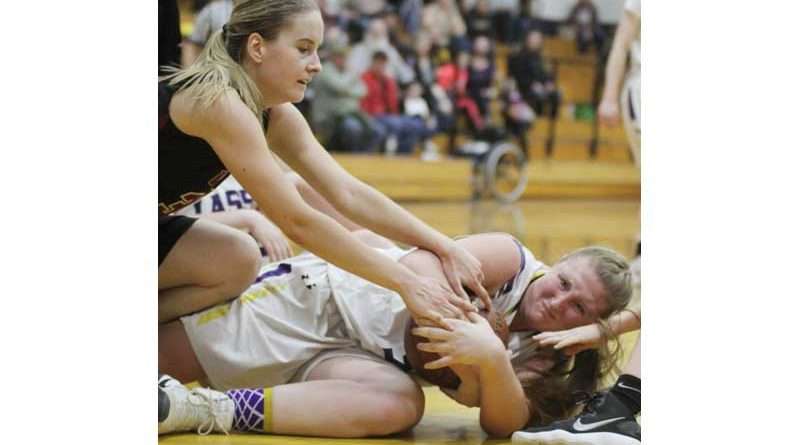 Lassen knew the match against the Eagles would be intense from start to finish as the Grizzlies fell to West Valley 57-54 during the away game mid-January. Thus, with tenacity on the mind, Lassen opened the game against West Valley with fire.

Unfortunately, the Grizzlies again lost to the Eagles, this time with a final score of 52-48, despite their hard work on the court.

After the unfortunate defeat against West Valley, the Lady Grizzlies geared up for their next home game against Central Valley. With determination and teamwork, the Grizzlies easily outsmarted the Falcons on the court and left the scene with the 59-38 win.

Lassen started the Feb. 2 game against the Eagles with a 2-0 lead as Maddie Hampton hit a basket from the top of the key 13 seconds into the game.

West Valley responded with some passion of their own, though, and managed four two-point field goals, one free throw and one three-pointer before handing possession back to Grizzly paws.

West Valley clearly started the game strong offensively, but their defensive play was just as impressive. The Eagles were consistent with their blocks and steals throughout the first quarter, which gave them a clear advantage over Lassen.

Ava Steele was next to impact the score with a rebound shot as the clock hit 3:38 remaining of the quarter.

West Valley hit two good free throws to finish their contribution to the quarter, and after a basket by Dani Nevis, the first quarter ended with a 14-6 Eagles score on the board.

Quarter two started off with some wrestling for the ball. West Valley had proven they were willing to bring the heat; now it was the Grizzlies’ turn to throw back some shade.

Becky Struthers hit the first rebound of the quarter with 6:58 on the clock. Then, 20 seconds later, Struthers again upped the Grizzly score with a layup.

Shelby Anderson and Hampton each hit a three-pointer by the time the clock hit five minutes, and thus the purple and gold team stole the lead from the Eagles 16-14.

West Valley finally made an impression on their score in the second quarter with a couple good free throws halfway through the quarter.

Hampton responded with a three-pointer to secure the lead once more, but West Valley was determined not to give up.

Another Eagle basket at 3:04 brought the score to 19-18, Lassen, and a couple free throws made by Kayla Downs brought the Grizzly score into the 20s.

With less than two and a half minutes remaining of the first half, Lainey Nevis attempted a three-pointer, her rebound was caught by Dani Nevis, and after a swift pass, Hampton returned the ball to the three-point line and shot the field goal to bring Lassen’s tally to 24 points.

Things were getting vicious on the court, as the Eagles were not too keen on tasting their own medicine.

West Valley upped their score by another four points during the second to last minute of the half, but a three-pointer by Dani Nevis in the last 55 seconds all but wiped clean the Eagle efforts.

The half finished with 27-22 on the board favoring Lassen High, and fans could easily tell that the Grizzly girls were furious.

West Valley started the second half with a basket, but another three-pointer from Dani Nevis kept the Eagles in check.

A couple good free throws and a quick basket after a jump ball put the Eagles at 28 points by the time the clock hit three minutes.

Dani Nevis scored a two-point field goal for the Grizzlies at 2:43.

Not long after, Hampton attempted a basket, but her rebound was caught by an Eagle. However, Hampton was clearly displeased with the situation as she stole the ball before the Eagle could get more than a couple dribbles in and successfully scored the basket to bring Lassen’s lead to 34-28.

In the final two minutes of the quarter, West Valley caught up to the leading Grizzlies right quick with two two-point field goals and a single three-pointer.

Though the Eagles were in the lead 35-34 after their latest three-pointer, the Lady Grizzlies refused to end the quarter with such a score. A good free throw by Anderson tied up the game 35-all to finish quarter three.

Lassen secured the lead once more 35 seconds into the final quarter with a basket by Struthers at the top of the key.

West Valley brought the score to a tie with a basket at 7:07, but 13 seconds later, Hampton scored a rebound layup from her own attempted free throw to bring Lassen on top by two points yet again.

Jamie Larson earned another two Grizzly points after shooting from beneath the basket after receiving a pass from Dani Nevis.

West Valley hit a couple good rebounds, but Larson was back at it with a rebound shot at 3:16 to keep the Grizzlies in the lead.

Another two good free throws from the Eagles ensured the Grizzlies couldn’t catch a break.

Lainey Nevis brought the Grizzlies up to 46 points with a three-pointer at 2:43.

West Valley then hit a mini streak and bumped up their score by six points via free throws and a layup as the game entered its final two minutes.

Anderson hit a rebound to bring Lassen into the lead 48-47, but the final minute and a half was full of nothing but Eagle success to ultimately finish the game with the Eagles ahead 52-48.

Though the Lady Grizzlies left the court feeling bitter, their need for a win only fueled their performance at home against the Central Valley Falcons Feb. 2. The Lassen ladies smoked out the Falcons with a 21-point lead by the end of the game.

Lassen couldn’t control their fury. Once the whistle blew, Lassen took over the court.

The Grizzlies won the tip off and Hampton immediately hit a basket to put the purple and gold team ahead..

Central Valley responded with a two-point field goal, but it didn’t take long for the Grizzlies to take the lead once again as Ellie Stewart scored a basket with seven minutes remaining of the quarter.

Hampton made another basket to bring the Grizzlies to a 6-2 lead. Then, after a Falcon three-pointer, the Grizzly score was raised by six points courtesy of field goals and free throws from Steward, Lainey Nevis and Dani Nevis.

The Falcons hit another three-pointer and a free throw as the quarter entered its final two minutes, but Lainey Nevis countered with a basket to bring the Grizzlies to a 14-9 lead.

In the final 90 seconds of the quarter, Stewart hit one two-point field goal and Hampton scored two.

The Lady Grizzlies finished the first quarter with a 20-9 lead.

In the second quarter, the Falcons scored one free throw and one two-point field goal.

Lassen, on the other hand, earned 12 points in the quarter. Steele and Lainey Nevis each made a free throw, Hampton and Dani Nevis each made one basket and Stewart scored three two-point field goals.