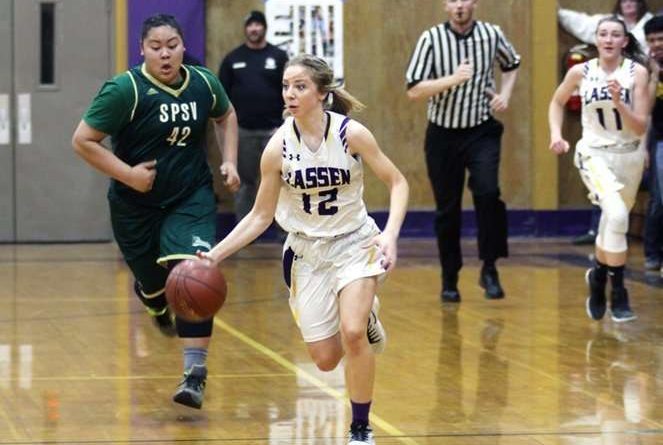 The match was devastatingly close and showed the level of skill required to qualify for the state playoff games.

Lassen ended up losing the match 62-61 and certainly finished off the season with a bang.

The game didn’t look promising for Lassen as the Bruins managed two three-pointers in the first minute of the game. However, the Grizzlies weren’t going to throw in the towel, and the Bruins got the message soon enough.

Makenna Busse scored the first basket for Lassen with a layup at 6:32.

St. Patrick-St. Vincent countered with a basket in the final seconds of the second minute, but Ava Steele quickly redeemed Grizzly pride with a layup after Gracie McCoy passed underneath.

Hannah Carson was next to bring up the Grizzly score with a layup at 4:48.

A good Bruin free throw advanced their score to nine points, and a basket from Busse brought Lassen one point behind the Bruins.

St. Patrick-St. Vincent scored another basket at 2:26 and after one good free throw and a missed one, the Bruins managed a rebound to bring their score to 14 points.

St. Patrick-St. Vincent stayed on top of their game to start the second quarter and made a basket with the first 30 seconds down.

McCoy stayed on her toes and caught a runaway ball soon after the Bruin basket and passed over the basket to Steele. Steele then wasted nary a second of thought before sinking the basket through the net.

Another assist from McCoy gave Carson her opening for a basket after a good free throw by the Bruins.

Another Bruin basket marked the final St. Patrick-St. Vincent success for the next two and a half minutes.

Steele found herself behind the free throw line three times in the span of a minute due to the Bruins’ inability to keep their hands off of the Grizzlies.

Steele made four free throws in total before handing off the free throw responsibilities to Gracie McCoy.

McCoy’s two good shots brought Lassen into the lead for the first time in the game. With 20-19 on the board, the Bruins felt the weight of too many Grizzly fans staring down on them.

A jump ball gave St. Patrick-St. Vincent an ample opportunity to score, and they didn’t hesitate to advance on it.

Jamie Larson took a turn behind the free throw line at 3:54 and scored another two points for Lassen.

McCoy had enough of the back-and-forth antics seen on the court; however, a stolen ball turned into a layup satisfied her hunger for victory.

Steele was the recipient of the Bruins’ 10th foul of the game and made one free throw for Lassen.

St. Patrick-St. Vincent attempted to reintroduce their threat with a basket at 2:48, but a good free throw from McCoy and Maddie Hampton quieted the Bruins once more.

Lassen’s seventh foul of the half occurred with more than a minute remaining and granted the Bruins another two-point gain.

After a brief timeout, Lassen’s Brynn Winters scored a free throw from St. Patrick-St. Vincent’s 14th foul, and with less than 40 seconds on the board, Larson was back in the spotlight with her basket.

As if the crowd wasn’t pumped up enough, Winters sparked another uproar of cheers as she smacked the ball away from a shooting Bruin and passed immediately to Carson.

From the pass, Carson bolted down court and made a layup with 17 seconds on the board.

Lassen was first to foul in the next quarter and the Bruins upped their point tally by two.

St. Patrick-St. Vincent landed one of three attempted free throws at 6:06, and Larson retaliated with two baskets scored by the time the clock hit 5:20.

The Bruins gained a second wind within the last five minutes and scored three two-point field goals and two free throws prior to a timeout being called with less than three minutes on the clock.

The timeout gave Grizzly fans the opportunity to marvel at Lassen’s 10-point lead.

Meanwhile, the Bruins were brewing up a plan to advance their score by the end of the quarter.

The first attack for St. Patrick-St. Vincent was to shoot a good three-pointer with less than 2:30 on the clock. Attack two was a couple of good free throws with less than a minute on the board.

While the Bruins were successful in carrying out the plan, Winters interrupted St. Patrick-St. Vincent success with two good free throws. Then, McCoy dodge defensive Bruins and scored another basket before allowing the Bruin free throws to begin.

Larson made the last basket of the quarter after Brussatoi took the lead for the jump ball throw-in.

With the Grizzlies up 52-41, Lassen appeared to have nothing but smooth sailing ahead. However, the Bruins had other plans.

St. Patrick-St. Vincent scored two baskets to kick off the final quarter, and with less than 10 points separating them from the lead, the Bruins refused to give up.

McCoy gave the Grizzlies another two points after Carson threw the ball into play, but the ball was back in Bruin hands 10 seconds later.

Another two Bruin baskets brought the game to a timeout with 54-49 on the board favoring the home team of purple and gold.

The Bruins attacked again and scored another basket to bring them to 51 points.

Larson continued to support the Grizzlies and scored a basket at 4:26.

Another Bruin basket tied up the score, but Busse was quick to counter with a basket 15 seconds later.

St. Patrick-St. Vincent tied up the score and then some with two baskets by 2:28.

After another timeout, the Bruins advanced on their lead with two good free throws in the final minute of the game.

McCoy landed another basket for Lassen and fans found themselves on their feet with delight at the 62-60, Bruin, score.

The Lassen Ladies refused to allow any more baskets for the Bruins, and in the final two seconds of the game, Busse finished off the Grizzly score with a good free throw.

A lot of talent was seen on the court as the Grizzlies took on the Bruins. With the game a loss for Lassen, the season was brought to an end.

Despite the loss, the Lady Grizz team accomplished great feats throughout the season and is already looking forward to the greater goals they have set forth for the next season.