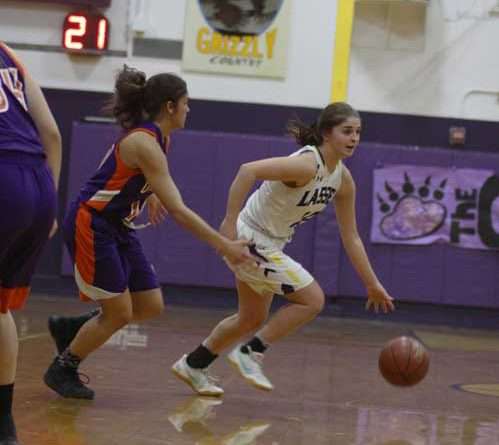 Chanting, cheering, yelling and sweating were all contributors to one of the most intense girls’ basketball games seen all season.

The Lassen High School varsity girls’ basketball team hosted the Oroville Tigers for the semifinals of the Northern Section California Interscholastic Federation District IV Playoffs Tuesday, Feb. 27, but no one could have anticipated just how intense the game would get.

The Lady Grizzlies ultimately lost the semifinals with a heartbreaking score of 52-51, which left purple and gold fans aching while the visiting Tigers saw their dreams come true.
The Oroville Tigers stepped on the court with a lot of pent up aggression, and they were clearly ready to let it loose.

Grizzly and Tiger fans sensed from the start that this semifinals match was far from typical; the first quarter ended with a mere 12-7 Lassen lead on the board.

After Ellie Stewart effectively won the tip-off, the Grizzlies appeared to be holding the advantage. However, the Tigers were quick to pressure the Lassen ladies and pounced on the rebounds with energy unexpected.

The first basket of the game was made by an Oroville Tiger nearly a full minute into the game.

It didn’t take long for the aggression to pull the Tigers down, though, as Stewart found herself at the free throw line with six minutes and 29 seconds remaining of the quarter for two good shots.

The score remained tied 2-all for nearly two minutes as the Grizzlies and Tigers battled it out on the court with fouls, steals, attempted baskets and the sound of fans roaring in support.
Stewart then upped the Grizzly score by another three points after a basket and a good free throw to follow.

Oroville attempted to counter with a free throw at 4:09, but the Grizzlies remained in the lead as the first half of the quarter ended.

The Tigers tied things up 5-5 with a couple free throws at 3:06, but Ava Steele was quick to recover the purple and gold lead with a layup four seconds later.

After another minute of brutal jabs, steals and sprints on the court, Dani Nevis made a basket while just inside the three-point arc to bump the Grizzlies to a four-point lead.

The Tigers found themselves at the free throw line less than 30 seconds later, but neither attempt to gain a point was successful.

With the adrenaline rush from a solid game and from the lead thus far, Lassen was quick to kick it into gear as soon as the Tiger missed the second free throw shot. With 1:17 on the board, Lainey Nevis hit a strong three-pointer to bring the Grizzlies to their final score of the quarter at 12 points.

After Lainey Nevis’ score, the Tigers manipulated their way down the court until they were fouled once again by the Grizzlies. Despite their last chance on the free throw line for the quarter, Oroville did not gain any points with 1:08 on the clock.

Oroville did, however, manage to sink a final layup prior to the buzzer sounding, thus bringing the score to 12-7, Lassen, by the quarter’s end.

Quarter two began with the Tigers once again eager to pounce.

The Grizzlies proved a tad too savage on the court, however, as the team’s seventh foul came with 7:17 remaining and thus granted two good free throws for the Tigers.

Though the two free throws were good from the Tigers, the success apparently wasn’t enough to calm the orange and black striped beasts. Stewart was at the free throw line with 7:09 on the clock, and with two good shots, the Grizzlies were back in the lead by five points.

Once the first minute of the second quarter was done, Oroville kicked it into gear. In the span of 35 seconds, the Tigers hit a rebound and a layup.

With 6:18 on the clock, Lainey Nevis passed the ball from the arc to the key with speed and precision. From the pass, Stewart easily lifted the ball for another two points favoring the home team.

Oroville stayed hot on the Grizzly trail, however, as the Tigers efficiently hit a two-point field goal at 5:59.
The Tigers pushed it too far, though, as foul number seven put Steele at the free throw line with 5:47 remaining of the half.

The fouling continued on both sides to stretch the supposed five minutes into a painful show of walking up and down the court for each team to try their hand at the shots.

The free throw streak finally came to an end at the hands of Steele, however, as the Grizzly was the victim of Oroville’s 10th foul and made one of two shots.

The two-point Lassen lead didn’t last long, unfortunately. With 3:16 on the board, Oroville hit a layup that tied the game at 17-all.

Between the start of the fifth and the end of the seventh minute of quarter two, anxious audience members saw eight additional free throw attempts shared between the two sides. Shelby Anderson made both attempts at 2:39, and the Tigers made a total of three good free throws.

The only interruption to the second series of free throws was a three-pointer made by the Tigers.
By the start of the half’s final minute, the Tigers were confidently on top of a four-point lead.

However, the boasting seen from the visiting Tigers only influenced the Grizzlies further.

Yet again, the quarter began with Oroville breaking the ice. After a full minute on the court, the Tigers managed to sink their first basket of the half, much to the Grizzlies dismay.

Stewart helped the purple and gold get even once more with a couple good free throws at 6:47, but the Tigers responded with three chances on the line at 6:14, all of which were good.

Anderson hit another good free throw for Lassen at 5:46 to bring the score to 28-26, Oroville, but pain had only just begun.

By the time the clock hit 5:30, it was already clear that neither side was going to leave the game unscathed. Ruthless shoves, collisions and attempted steals resulted in girls on the floor and bruises to appear.

Oroville took advantage of the brutality to boost themselves with three two-point field goals by the end of the quarter’s fourth minute.

Despite their grand efforts, the Grizzlies simply couldn’t catch a break.

Lassen was sure to attempt countless baskets, but the usual precision was missing from the beloved Grizzly team. Though the rim saw plenty of action, the net was lacking in said category.

The only Grizzly field goal made in quarter three was courtesy of Grace Memmott, who proved to be the breath of fresh air needed on the court with little more than two minutes on the clock.

With five seconds on the clock, cries of agony could be heard throughout the stands as the Tigers managed a last-minute three-pointer and the Grizzly crowd was not exactly pleased with the Oroville accomplishment.

Quarter four began with Lassen down 37-28, but the Grizzlies refused to lose hope.

For the first time all evening, Lassen was first to hit the ground running at the quarter’s start. Anderson swooped in with the ball and calmly hit a three-pointer that allowed the purple and gold team to join the 30s on the board.

Oroville responded with a basket at 6:19, but the home team kept their focus.

Hampton hit a good free throw with 4:35 on the clock and when her second shot didn’t make it in, teammate Larson was quick to pounce on the chance for a rebound.

Larson successfully added another two points to the Grizzly score with her rebound shot, and with 4:25 on the clock, she took her place at the free throw line to bump up her contribution by yet another point to serve as payback for the Tiger who fouled her during the shot.

With 4:16 on the clock, Oroville hit a layup to reach 41 points, but Stewart responded with a basket 31 seconds later to keep things interesting.

Anderson was fouled with three minutes on the board, and once given the chance to add two points to Lassen’s score at the free throw line, she eagerly took it.

The Tigers recognized the purple and gold threat once again as the score showed a mere two-point difference. In response, Oroville hit a three-pointer and a basket in the span of five seconds to bump themselves up to a tally of 46.

Hampton kept energy high on the court with a basket of her own with 2:30 on the clock, and though the Tigers responded with a basket at 1:59, the Grizzlies remained rather unfazed.

Steele hit yet another good free throw with 1:03 on the clock and in a similar play as before, Stewart caught Steele’s second shot rebound, made a basket and then situated herself at the free throw line for her own free throw success.

Without a full second passing on the clock, Lassen made their seventh foul of the half and both teams walked to the other side of the court to watch a Tiger hit two good free throws.

Steele added a point to Lassen’s tally with 48 seconds remaining, and though the game had been rough and the score currently read 50-46 in Oroville’s favor, Grizzly fans couldn’t stop cheering for the home girls to keep strong.

Oroville hit another two free throws with 26 seconds remaining to bump up their lead to six points, but in a dramatic twist of fate, Hampton unleashed her own pent up aggression in the most appropriate way possible: she hit a three-pointer with 17 seconds on the clock.

With only three points separating the two teams, the Tigers acted rashly and fouled Hampton, marking their 12th foul of the half thus far.

The still-aggressive Grizzly stepped up to the free throw line and the crowd suddenly hushed to allow Hampton to focus. With precision and ease, Hampton successfully hit both free throws and caused the gymnasium to refill with cheers that seemed twice as loud as any before.

With only one point standing in the way of an overtime period and potentially the win, Lassen gave their all on the court.

However, effectively evasive moves from the Tigers kept the ball out of Grizzly possession until the buzzer rang.

The heartbreaking loss of 52-51 left fans devastated, but the Grizzlies can rest assured that not one attendee faulted them for the sour luck.

The varsity Lady Grizz basketball team ended their season with pride, overall success and the full support of Lassen County.