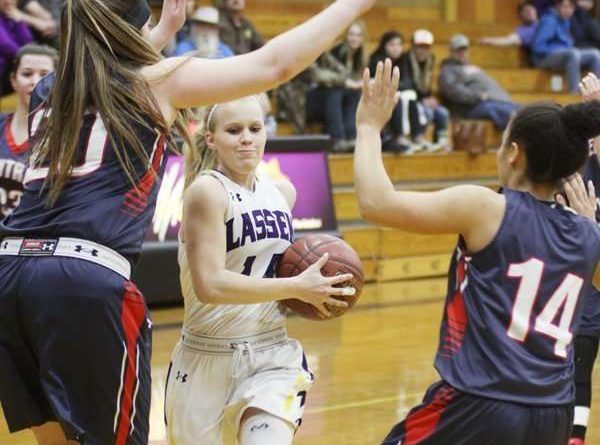 The first round of playoffs proved to be nothing more than a casual practice for the Lady Grizz team on Tuesday, Feb. 21.

Seeded sixth initially, the Grizzlies hosted the Central Valley Falcons and ultimately blew the birds away with a 72-43 final score.

Makenna Busse not only gave Lassen the immediate advantage with her successful tip-off jump, but she also rushed down court and immediately scored a basket less than 30 seconds into the game.

Central Valley hardly hesitated before stealing the lead with a basket and two good free throws, but Ava Steele tied up the score 4-4 with a basket at 6:15.

With both teams completely into the game, rushed passes and a few stumbles were not uncommon sights on the court.

With five minutes on the clock, the ball entered Grizzly territory and found itself closer and closer to the net.

However, a Central Valley misstep resulted in the ball rolling on the ground.

Hannah Carson then dove down to snatch the ball away from the guest team, and with Falcons quickly surrounding her; she passed the ball to Busse, who launched it down court without hesitation.

Gracie McCoy was next in the spotlight as she reached out to save the ball from leaving bounds with just enough energy to return possession to Busse for a basket.

With 8-4 on the board, fans were clearly in the know that this was not going to be a dull game.

Jamie Larson was subbed into the game with power and passion on her side.

Larson fought her way into the key before making Lassen’s fifth basket of the night.

Jaz Brussatoi showed that she was properly warmed up with a three-pointer at 2:45.

The Falcons kept spirits high despite the overwhelming show given by Lassen. With less than two and a half minutes remaining of the quarter, Central Valley hit their third basket of the night.

Brussatoi followed with another three-pointer to bring the Grizzlies up to 16 points, but the Falcons were sure to counter with a two-point field goal at 2:02.

Larson hit another basket from within the key at 1:16, but the hyped-up Grizzlies made their seventh foul soon afterward.

Fortunately, the free throw was no good, but it would not be Central Valley’s last chance behind the line.

With 18 seconds on the board, Brynn Winters made the final basket of the quarter with a shot from just beneath the net.

Quarter two began with the grizzlies up by 12.

Busse and Steele each scored two good free throws by the end of the first minute to ensure Grizzly dominance was understood.

McCoy only reiterated the message with her layup at 6:53.

Lassen’s excitement and success came at a price, however, and the Falcons saw themselves behind the free throw line twice more by the 5:30-mark.

Dani Nevis scored a good three-pointer in an attempt to shake of the Grizzly foul streak, but within five seconds, Lassen managed to make their 10th foul against the Falcons.

The two free throws to follow were both good for the Falcons.

Lassen’s 11th foul gave another good free throw to the Falcons at 4:30, and seven seconds after the Falcon success, a layup was seen by Central Valley.

Brussatoi found herself behind the free throw line just before the four-minute mark, and another point was added to the Lassen tally.

Central Valley boosted their score by five with a three-pointer and a couple free throws, and after two good free throws made by Maddie Hampton, the Falcons hit another six free throws.

Fouls couldn’t stop for either side, as Steele was next behind the line. Another good free throw brought the Grizzlies up to 33 points to counter Central Valley’s 24.

Busse scored a rebound at 1:08 and the Falcons scored one with nine seconds remaining. With that, the quarter was called. Lassen was up 35-26.

Steele kicked off the second half with a basket and a free throw at 7:46, and McCoy made another basket by the end of the first minute.

At 6:45, Carson took the lead and threw in a jump ball straight to Busse for another basket.

McCoy performed a layup with less than six minutes on the board, and a timeout was called with 44-26 on the board.

The Grizzlies kept their wits about them and refused to underestimate the Falcons.

Steele hit a free throw at 5:34, but once the clock was down to five minutes, the court belonged to Carson.

A basket shot from beneath the net put Lassen up to 47 points. A rebound from a jump-ball throw-in bumped Lassen to 49, and a steal, dash and layup brought the Carson train to station with 51 points on the board.

With 1:24 on the board, Hampton attempted a three-pointer. Upon the miss, Busse caught the rebound and passed underneath to Carson. Without missing a beat, Carson easily transferred the ball from her hands to the net. Lassen was at a 54 point tally.

With 24 seconds on the clock, Carson made the final Grizzly basket after an assist from Hampton.

After nearly eight minutes of the scoreboard advancing for only the home team, the Falcons made one last desperate attempt.

A Falcon sprinted down court with full intention of scoring a basket. Though the shot was good, the shooter didn’t release possession until after the buzzer rang. However, Lassen had fouled the shooter a second prior to the buzzer, so Central Valley was granted a good free throw.

With one quarter remaining and a score more than double that of their opponent, Lassen was feeling the gold fever.

Winters hit a rebound at 6:09 to bring Lassen to 64 points, and after an assist from Carson, Winters landed another basket at 5:38.

McCoy made another good layup with five minutes remaining of the game, but the Falcons showed their skill at the copycat game by making a layup 44 seconds later.

After a timeout to keep the ladies hydrated, Central Valley hit three good free throws to bring their score up to 39 points.

Busse hit another rebound at 3:27 and Lassen rested comfortably with a 31-point lead.

In the last minute, Central Valley made two free throws and a rebound.

Winters made the final Lassen basket with 11 seconds on the clock, and the Grizzlies finished ahead by 29 points.