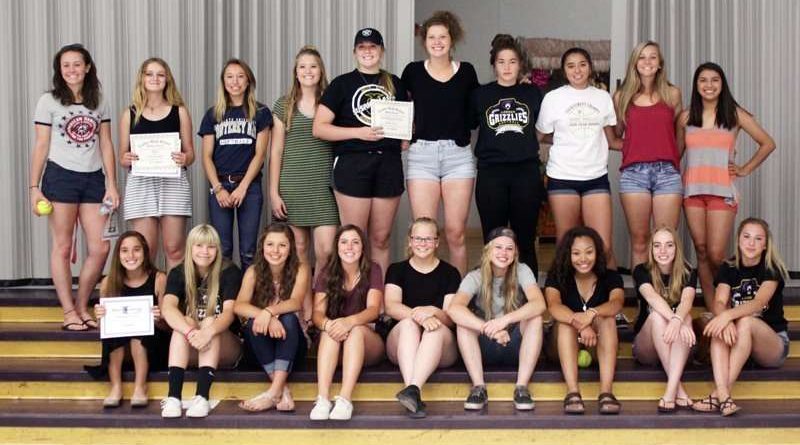 A season of success during league play and otherwise finally saw its conclusion with an awards banquet held for the Lassen High School softball teams on Monday, June 5.

Though the girls on both the junior varsity and varsity teams finally started summer vacation on Friday, June 2, the Grizzlies were more than willing to reunite for an evening of reminiscing and celebrating efforts seen throughout the season.

Varsity head coach Hillary Magarrell started the evening off with an acknowledgement of her appreciation toward Lassen High School, the administration, coaching staff, junior varsity staff

and ultimately the family and friends who a unconditional supporters of the ladies at the diamond.

Junior varsity head coach Megan Carver and assistant volunteer coach Jason Kerby took over from there with their recognition of each girl on the junior varsity team.

Carver said, “It was a fun year girls. I hope you had a good time because I sure did while getting to know and work with each and every one of you.”

The junior varsity player honored with the Most Improved Award was Ellie Stewart. Carver mentioned the many goals each girl had set for the team as well as for themselves. According to Carver, “(Stewart) constantly worked on them, and by the end of the year, she crushed almost every single one of her goals.”

Jewel Kerby earned the Most Inspirational Award for her eagerness to encourage the team as well as her ability to play nearly any spot on the field.

The junior varsity team was full of great players for the 2017 season; because of this, two girls were honored with the Best Defensive Player Awards: Hailey Mena and Jamie Larson. Carver said, “These two were definitely the strongest for us this year. We needed them every game.”

The Coaches’ Award was presented to Chelsea Williams because of her strength in every position as well as her ability to step up whenever asked to do so.

Sara Gardiner was the junior varsity team’s MVP. Gardiner earned the title after displaying dedication offensively and defensively throughout the season.

Before recognizing the girls, Magarrell took a moment to recognize some of the outstanding parents who made this season memorable.

Christy Lewis, mother of player Carli Lewis, was honored as the team mom of the varsity Grizzlies. Magarrell mentioned that the care packages Christy Lewis would send with the girls to games would immediately start the game off on a good note.

Vickie Nevis, mother of Dani and Lainey Nevis, received recognition for her dedication to the team, as she was one of the main bookkeepers for the team as well as a great source of encouragement through thick and thin.

The final parent to be recognized was Dwayne Nevis, father of Dani and Lainey Nevis, for his undying dedication to spending every possible minute coaching the varsity girls voluntarily.

Once the attention was turned toward the team members, each girl was recognized for her participation on the team.

Varsity had their own twist on the awards presented.

Along with a certificate, players were each presented with a softball used in at least one of the games from this season. The player’s name and Lassen High School varsity softball 2017 printed on the softballs.

The Best Offensive Player Award was presented in the form of a silver bat with the title Silver Slugger.

The Silver Slugger Award was presented to Dani Nevis. Regarding the award, Magarrell said, “It’s not just who has the best hitting percentage; it’s the kid who gets on base, who steals, who does what they need to do.”

The Best Defensive Player Award was presented in the form of a golden mitt inside a display case with the title Golden Glove.

The Golden Glove Award was given to Lainey Nevis. Magarrell said the award is given to the player who makes those outs and who is involved in the plays. Lainey made a total of 11 errors this season, nine of which were made in the pre-league tournaments. She had a total of 58 putouts and 35 assists.

Regarding Lainey, James Lewis said, “More than anything, defensively, she took games away from other teams. They thought they had hope, but she took it away from them.”

The final team awards were the MVPs. Magarrell stated, “An MVP to me is that kid who is a team leader, brings a team up, is a solid backbone of the team, hitter, runner, plays the field and can do anything for you.”

The varsity staff couldn’t pick just one MVP, so the two MVP Awards were presented to Jessie Kerby and Carli Lewis.

Earlier in the evening, Magarrell referred to Jessie as one of the hardest workers she knows. Assistant coach Lewis commented that Jessie is one of the rare four-year varsity players.

“When she played this year, she fielded her position amazingly,” said Magarrell regarding MVP Carli Lewis. “She carried the team as far as pitching.”

Prior to the award, assistant coach Lewis said that according to his research and the research of the varsity coach of years earlier, Carli Lewis is one of the only four-year starting pitchers in Lassen High School history.

As the school year had come to an end on June 2, the Northern Athletic League awards had already been given to the honored girls, but Magarrell made sure to mention the honors given.

To bring closure to the evening, assistant coach Lewis said, “(Magarrell) talked individual about everybody, but more importantly, this group really came together this year. They had a lot of potential. They continued to improve and continued to work hard. Ultimately, it led them into the Section Championship game. These girls should be very, very proud of what they’ve accomplished this year.”

The varsity and junior varsity teams then gathered together for a final huddle before waving the season goodbye and sending well wishes to the recently graduated seniors.