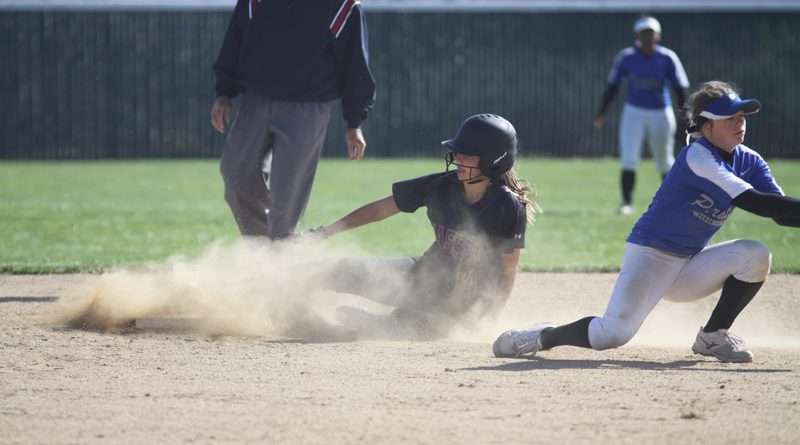 Rylee Friddle beats the ball to second base during the second Grizzly game in the Lassen Tournament held Friday, April 27 and Saturday, April 28. Photo by Ashley Grogan
Sports
May 12, 2018May 14, 2018 Ashley Grogan, Sports Editor

The Lady Grizzlies effectively sandwiched their only loss of the tournament between two 10-point leading wins.

Lassen opened the tournament against the Yreka Miners on Friday and effortlessly knocked the visiting team down with a final score of 11-1.

The Grizzlies then took on the Wheatland Pirates on Friday and suffered a hard-fought loss of 6-5.

Then, the Grizzlies came back on top against the Enterprise Hornets on Saturday with a final score of 10-0, restoring their confidence.

Lassen had a total of 16 hits in addition with three made by Kerby and Nethery, two by Carman, Knezevich and Nicholas and one by Fawn Robinson, Williams, Floyd and Parady.

Kerby, Carman, Knezevich, Nicholas, Floyd and Parady were each credited with an RBI as well.

Both Floyd and Nethery stole a base during the game.

On the mound for Lassen was Floyd for the entire duration of the game. She faced 19 batters and struck out five.

She allowed four hits, one run and one walk.

Lassen then took on the Wheatland Pirates and things definitely got heated on the field.

The five-inning game ended with the Pirates earning the 6-5 win, but the Grizzlies were fuming and had made many cries of injustice declared throughout the game.

In the first inning, Lassen appeared on top with one run scored by Floyd and none by the Pirates allowing the purple and gold to establish a lead.

However, the Pirates responded with four runs during the top of the second inning, so the Grizzlies were immediately put on edge.

During the bottom of the second, Rylee Friddle hit a single and stole second while Nicholas was at bat. A single by Nicholas sent Friddle to third, and with Kerby at bat, Friddle stole home.

A third out was called before Nicholas managed to make it home, but the Grizzlies refused to feel discouraged at the 4-2, Wheatland score.

The top of inning three saw nothing from the Pirates, but the Grizzlies again brought in one run.

Floyd started things off with a walk and stole second prior to Carman walking.

Knezevich was the third Grizzly to walk during the inning and both Floyd and Carman advanced to load the bases with Robinson at bat.

Then it became apparent that the Wheatland pitcher just couldn’t break her stride, so Robinson walked as well and allowed Floyd to make it home.

Nethery and Parady both reached first on fielders’ choices and both Carman and Knezevich were out at home.

Then, a final strikeout caused the Grizzlies to take on the field for the fourth inning.

Clearly unhappy with how quickly the Grizzlies were catching up, the Pirates showed some aggression during the top of the fourth.

With one out on the board, one Pirate hit a sacrifice fly to send another home from third base. However, a pass from a Grizzly outfielder who caught the fly back toward the home plate was caught by Lassen’s pitcher, Floyd.

Upon catching the pass, Floyd reached home plate and tagged the Pirate as she slid toward the base. In a fit of anger for being called out, the Pirate then proceeded to shove Floyd to the ground by throwing some elbows. The act caused the Grizzly fans, players and coaches to become engulfed in rage.

Once the dispute softened to grumbling fans and players, the game continued and the Grizzlies braced for an inning of success.

Kerby hit a single to start things off at bat and Floyd followed with a spark of passion apparent with her every move.

Floyd, pumped up on adrenaline and a need for revenge, hit a home run to bump the Grizzly run count up to five.

Carman then followed with a single, and Knezevich reached first on a fielder’s choice that sent Carman back to the dugout.

Another out sent the Lady Grizzlies back to the field to start inning five.

During the top of the fifth, Floyd proved she was definitely not a Grizzly to mess with.

Though she derived satisfaction from her home run, Floyd wasn’t done with her revenge-fueled passion for the game.

Floyd faced four batters during the top of the final inning. She struck out the first two with ease, and after allowing one single, her fourth pitch was hit by the Pirate and caught by Floyd to put an end to Wheatland’s chances to advance their score.

Lassen was then at bat and Parady was eager for the spotlight.

Parady put full force into her hit and dashed around the bases while the Pirates scrambled to get the ball back into play. Once Parady hit third base, she made the split-second decision to book it home.

Parady nearly made contact with home plate, but the Pirate catcher might have blocked the plate to catch the ball and tag the Lady Grizzly out.

A final strikeout ended the game in Wheatland favor and caused the Grizzlies to vow vengeance.

Unfortunately for the Enterprise Hornets, they were the victims of the Grizzly rage.

The Saturday game against the Hornets ended with Lassen on top 10-0 after six innings.

Lassen scored their first run in the first inning, followed with a run in the third, brought in two in the fourth and ended big with six runs scored in the sixth inning.

Grizzly defense was on top of things as well and hardly allowed any hits from the Hornets, let alone runs.

Lassen had a total of 14 hits during the game.

Carman was credited with four RBIs, Williams had one and Parady had one as well.

Regarding base running, Floyd stole three bases throughout the game and Knezevich stole two.

Floyd again pitched for the entirety of the game with nine strikeouts for the 22 batters faced. She gave up two hits in total.

After the tournament, the Lady Grizzlies traveled to Central Valley to recommence league play with a doubleheader.

Unfortunately, the Lady Grizzlies fell to the Central Valley Falcons in both games with scores of 6-0 and 3-1, respectively.