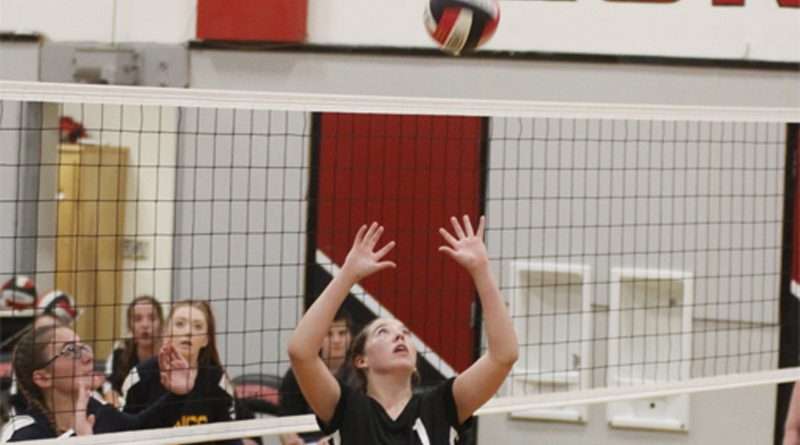 After a strong four games, the Lady Jacks won with an overall score of 3-1 and set the Vikings packing.

After the win, Westwood’s head coach Nancy Barrera had nothing but praise for the hardworking Lumberjacks.

Prior to the Oct. 24 game, the Lady Vikings were the victors over the Lumberjacks during the Oct. 3 home game. Again with a score of 3-1, the two teams proved themselves well matched against one another.

The first match of the Westwood home game started with the visiting Vikings in the lead. Herlong’s Autumn Thurber earned four points for the Vikings with consecutive unreturned serves.

Soon after, Herlong’s Jayde Dunn spiked the ball to the Lady Jacks and sent herself behind the serving line. With four serves, two of which were aces, the Vikings were standing atop a 10-2 lead.

However, the Viking’s solid groove on the court started to rub off on the home team. Westwood’s Alyssa Boyd hit a spike that couldn’t be blocked with 12-7, Herlong, on the board, and thus sent teammate Haleigh Meeks to the serving line.

Meeks served two aces while behind the line; by the time Herlong regained serving possession, the score had adjusted to a more even score of 12-11, Vikings.

Westwood then attempted to counter one of Carpenter’s serves with a dig by Brianna Ortlieb followed by a set by Claudia Herman. Though the round was ultimately a Viking win, the effort seen from the Lady Lumberjacks reminded the Vikings to keep on their toes. Herlong still held the lead, 16-14.

Regarding Herman, Barrera later commented, “Claudia has been setting all season long, and she’s making it her own and really doing well.”

Meeks brought the Lady Jacks back into the fight with a spike to earn Westwood’s 15th point. Westwood’s Boyd then served a few rounds and landed an ace to again bring the Lady Jacks within one point of the Vikings.

Thurber followed Boyd’s ace with one of her own to bring the Vikings up to 19 points, but a tip by Westwood’s Julia Losee-Baker granted the Lady Jacks point 17.

Thurber then spiked the ball and continued the individual point climb with one for Herlong, but Meeks countered with a block that granted a point for Westwood.

Westwood’s Maddyn Gunn got her chance behind the serving line. Not only did she manage to tie the game 20-20, but with three more aces and a couple solid rounds, Gunn also brought the home team up to 25 points, thus winning the first match.

In the second match, Herlong again started off in the lead; however, once Meeks stepped behind the serving line, the Viking lead began to slip away slowly before disappearing altogether. Meeks served the first ace of the game to bring the score to 5-4, Herlong. She then brought the score to a 5-5 tie with an unreturnable serve. Her final serve was an ace that granted Westwood the 8-5 lead before Herlong gained possession once again.

Regarding Meeks’ performance during all four matches, Westwood’s coach Barrera commented, “Haleigh Meeks was solid as ever with her serves and her overall strategy.”

Thurber served up an ace to bring the score back to a tie, but an ace from Westwood’s Destiney Bennett brought the Lady Jacks to an 11-8 lead. Bennett then continued to make three additional aces and give stellar serves that were followed with great plays from the Lumberjacks. By the end of her serving reign, the home team was up 18-8.

Viking server Carpenter made up for the point gap, though, as she had five great hits over the net prior to a timeout, and then continued until the teams were again at a tie, 18-18.

Herlong’s Maddie Hinojos then stole the lead for the Lady Vikings with an ace, and teammate Tearza Altuz soon followed with anther Herlong ace to bring the ladies to the 22-20 lead.

A spike from Meeks with an assist from Bennett allowed Westwood to again gain on the Vikings as the score showed 23-22, Herlong.

Once the score was again tied, the battle for point number 24 induced more than seven volleys between the teams. Westwood’s teamwork and focus ultimately granted them the lead, and with an ace served by Ortlieb, the Lumberjacks won the second round of the game.

Match three stared off intense with 12 volleys full of sets, spikes and digs. Ultimately, Westwood’s Gunn got the last word in with a spike that sent the Vikings scrambling and granted the home team their first point.

Herlong’s Carpenter was then next to dish up the pain with a killer spike that tied the girls 3-3.

Altuz served up an ace to steal the lead 6-4, Herlong, and soon after, teammate Carpenter served a good four rounds before the Westwood timeout allowed the score to settle at 11-6, Vikings.

After the brief pause in game play, Carpenter then continued her serving streak with four aces.

The game continued to heat up as the Vikings made leaps and bounds toward the win. With a score of 18-8, Herlong, on the board, both Thurber and Meeks leapt at the ball as it hovered over the net. Though both ladies touched the ball with the hope of killing it in favor of their team, Thurber’s influence won out. The Vikings were now ahead 19-8.

Thurber then served two aces prior to Westwood’s Losee-Baker tipping the ball and giving the Lady Jacks a fighting chance.

A spike by Herlong’s Carpenter brought the Vikings within one point of the win. However, prior to stealing the win once and for all, the Lady Jacks managed to regain possession and allow another ace by Gunn.

The final score of match three was 24-11, Herlong.

Though Gunn wasn’t able to save the Lumberjacks at the end of the third match, she made sure to give them a strong leg-up in the fourth. Gunn served an ace to tie the match 2-2, and then followed with three more aces to bring the Lady Jacks to the lead 6-2.

Barrera later reflected on Gunn’s performance and said, “Maddyn’s serves definitely turned a couple plays around for us.”

Dunn was able to serve an ace for the Vikings, but the lead was still favoring the home team.

Soon after, a bump by Westwood’s Boyd sent the ball soaring over the net and straight to the ground, thus earning the Lady Jacks another point and sending Meeks to the serving line.

Though Meeks’ serves usually meant trouble for the Lady Vikings, Herlong was determined to play hard from start to finish. Meeks gained two points for the home team before the Vikings got it back.

A spike by Boyd gives Bennett another shot behind the line, and after seven good serves, including one ace; she definitely earned the cheers heard from the crowd.

A tip by Herlong’s Carpenter finally broke Bennett’s streak and allowed the Vikings another shot at the win. Carpenter then served the ball over, and upon its return, she spiked it from the back of the court and brought the Vikings up to nine points.

Though the Vikings were regaining their footing, the Lumberjacks were eager to call it a night. A spike by Herman brought the score to 24-13, Westwood, and though the Vikings managed to foil Westwood’s next serve, it only took one more play before the Lady Jacks won the match 25-14, and thus the game.

After the game, Westwood’s coach Barrera provided nothing but positive comments about the Lady Jacks.

“Destiney Bennett’s serves were great this game. Julia (Losee-Baker) and Bri (Ortlieb) have been wherever we need. They’ve been providing great support. Alyssa Boyd’s ability to read defense and make adjustments is key to our defense,” Barrera said.

She later continued, “I don’t know if we will make playoffs, but this is the best volleyball I’ve seen all season.”