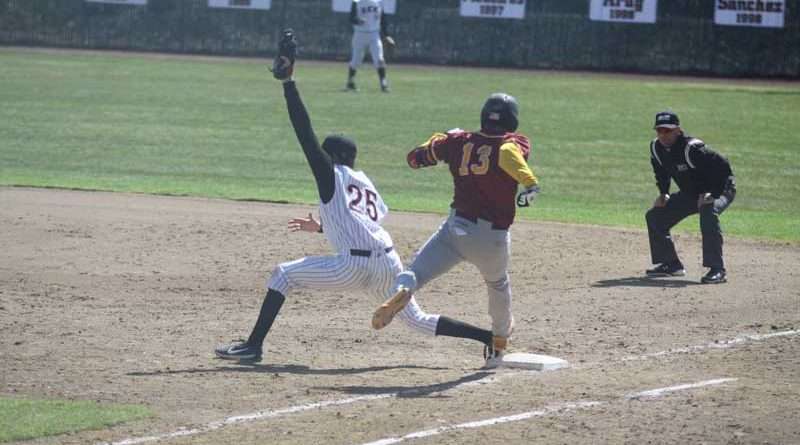 While eagles are not often seen on the average cougar’s dinner menu, exceptions can always be made in the name of baseball.

Between Friday, March 30 and Saturday, March 31, the Lassen Community College Cougar baseball team traveled to the College of the Siskiyous to completely annihilate the Siskiyous Eagles in a three-game series.

Lassen College head coach Frank Avilla said, “We control our own destiny. Anytime you have the chance to control your own destiny, it makes things a little bit easier.”

The Cougars opened the series on Friday with a 7-3 win.

They then took on the second game on Saturday and walked away with the 5-0 shutout victory.

Lassen finally finished the Eagles off once and for all with a 9-4 win from game three.

“I’m proud of them. Like I’ve been saying all along: if we do the little things, the big things will take care of themselves,” said Avilla.

Lassen took the lead right off the bat during game one of the series as the first inning ended with a 2-0 Cougar score on the board.

During the top of the first, Ryan Thomasy singled, sole second, advanced to third thanks to Jordan Taylor grounding out to second base and finally ran home courtesy of a double hit by Eric Carlson.

Carlson then advanced to third on a wild pitch before he was brought home with a single from Robert Lujan to thank.

During the bottom of the first, Carter Glick was on the mound with only one walk given. Glick had two strikeouts, the first looking and the second swinging, and ended the inning with no runs against him.

Inning two didn’t see success from either side of the board, but Glick did add a strikeout to his record during the bottom half of the inning.

The third inning ultimately ended with a tie on the board as the Eagles bumped up their score to two runs thanks to four hits.

The teams remained tied at 2-all until the top of the fifth during which Carlson doubled, Luke Smith walked and Lujan was hit by the pitch to load the bases.

Jared Kiessling then stepped up at bat and brought in both Carlson and Smith with a single that sent Lujan to second.

Mitchell Menns then doubled to send both Lujan and Kiessling in, and thus the score was raised to a 6-2 Lassen lead by the start of the bottom of the fifth.

Unfortunately for the Eagles, the score didn’t move in their favor until the bottom of the eighth. Between the fifth and the eighth, Glick struck out one and Michael Wood took over on the mound for two innings without giving up any hits.

During the bottom of the eighth, Tony Goodman took over pitching for the Cougars. With two walks and a hit, the Eagles managed to bring in one.

Michael Sallee then pitched for the remainder of the inning and send the Cougars back to the bat.

Inning nine saw a final run from the Cougars as Smith doubled and immediately advanced to third on a wild pitch before Lujan hit a sacrifice fly to bring him home.

During the bottom of the ninth, Tristan Hager finished the game off on the mound. Hager gave up one walk and struck out another Eagle before the game was called.

The final score of 7-3 only furthered the Cougar’s determination to sweep the series.

The second game took a bit longer to get going than the first, as the score remained 0-0 until the top of the fourth.

However, once the game reached the fourth inning, Lassen let it rip.

Smith singled to start things off on a good note and Lujan singled to send Smith to second.

Lincoln Turner then singled and brought Smith in while sending Lujan to second.

Lujan stole third and Turner stole second while Jack Bell was at bat. Then, Aiden Leahy walked to load the bases.

Next, Mitchell Menns stepped up to the plate and braced for a strong hit. Menns singled to bring Lujan in, and a throwing error by the Eagle second basemen allowed Leahy to advance to third and Turner to score.

The score stayed 3-0 until the top of the sixth, in which the Cougars impacted the board yet again.

Leahy started the inning off with a single, but an error by the third baseman allowed Leahy advance to second and then third.

Menns then singled again and brought Leahy in before stealing second.

Menns didn’t make it in by the end of the inning, but the Cougars will still sitting strong on a 4-0 lead by the start of inning seven.

Lassen then remained with four runs on the board until the top of inning eight, in which the Cougars scored their fifth and final run of the game.

Jack Bell started off with a single and was followed by a single from Leahy that sent him to second. Bell then attempted to take third, but the Eagles were too quick and took him out.

Menns then singled to send Leahy to second base, and a single from Baig sent Leahy home.

The Eagles ended the inning soon after the final Cougar run and an uneventful ninth inning ended the game with a shutout win of 5-0 for the Cougars.

The final game for the Cougars was a 9-4 win with the action starting in the second inning.

Smith singled to start inning two and then advanced to second as Lujan was hit by the pitch.

Turner was next at bat and brought Smith in with a single that also sent Lujan to second.

Jared Kiessling reached first on an error by the pitcher and ultimately reached second on the error as well. From Kiessling’s hit, Lujan advanced to third and Turner to second, and the error brought Lujan in and sent Turner to third.

While Menns was at bat, Turner scored on a passed ball and Kiessling advanced to third.

Then, Menns hit and reached on a fielder’s choice to pitcher, and followed by advancing to second on the throw. Kiessling was tagged out at home.

Baig then stood at the plate to single. Then, with Thomasy at the plate, Menns stole third.

Thomasy then hit a sacrifice fly to center field that brought Menns back home to give the Cougars a strong four-run lead.

The Eagles refused to end the second inning without a score and ultimately managed to bring one home before sending the Cougars to bat for inning three.

In the third inning, Carlson scored a run for the Cougars after hitting a double, advancing to third on Smith’s hit and finally sprinting home on Lujan’s single.

The Eagles had a lack of response until the bottom of the fourth, in which three hits resulted in one Siskiyous run.

Success revisited the Eagles during the bottom of the fifth to allow Siskiyous to earn their third run; all the while Lassen had kept their run tally at four.

With both inning six and seven proving unproductive for the teams, the game was nearing a 4-3 Cougar win.

However, during the bottom of the eighth, Siskiyous put their hearts on the diamond and scored another run to tie things up 4-all.

With the tie officially proving a threat against Lassen’s chances of success, the Cougars suddenly reemerged from their den to end the game once and for all.

During the top of the ninth, it took two outs before a Cougar managed to reach first. Baig found himself on first base with a walk; then, with a single from Thomasy, he advanced to second.

Taylor then walked to load the bases and subbed out for Leahy, who was ready to run.

Carlson stepped up to bat next and singled to send both Baig and Thomasy home. Leahy advanced to second.

Smith then followed with a walk and once again, the bases were loaded.

Lujan then singled to bring in both Leahy and Carlson. Though neither Smith nor Lujan made it in prior to the inning’s end, the four runs earned in the ninth inning were enough to cause the Eagles to tap out.

The Cougar-winning score of 9-4 solidified the series sweep and sent Lassen home with pride.

Avilla said, “We had some strong pitching performances; we played solid defense and anytime you can bring that to the yard, you will have increased chances of winning.

“Not to mention, we’ve been solid offensively, so the boys have a little bit of momentum rolling into the series with Butte College. We’re two games behind them in the conference standings.”

Next, the Cougars took on the Butte Roadrunners for a rematch series Friday, April 6 and Saturday, April 7. Results will be published in the Tuesday, April 17 issue.

“Three weeks left. Every game is playoff baseball. Every week we will be fighting for our playoff lives. And that’s the most fun time of year,” said Avilla.