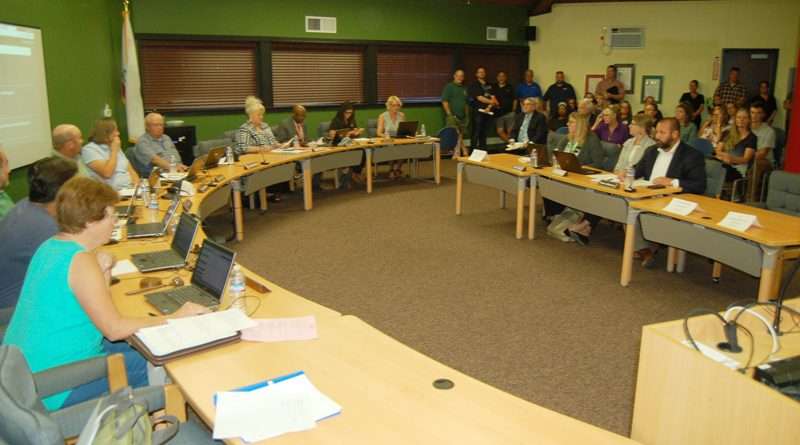 It is standing room only as the Lassen Community College Board of Trustees discuss solutions to an unexpected $2.4 million budget shortfall at its Monday, Aug. 26 meeting. Photo by Sam Williams
News
September 3, 2019 Sam Williams, Managing Editor

Trying to figure out how to deal with an unexpected $2.4 million budget shortfall, Lassen Community College’s Board of Trustees unanimously rejected a resolution from the administration to eliminate a dozen classified positions or reduce their hours at a special meeting held at 6 p.m. Tuesday, Aug. 27.

Board President Sophia Wages, Vice President Louis Hamilton and trustees Alan Siemer, Shaun Giese, Buck Parks and Kim Dieter voted no on Resolution No. 08.27.2019-7.01 regarding the layoff and reduction in hours for classified employees due to “lack of work and/or lack of funds.” Trustee Tim Purdy was absent.

Instead, the board asked the college staff to advise them and provide suggestions about how the college should respond to the budget shortfall for the next academic year.

Time is of the essence as the college has to approve a budget and submit it to the state by Oct. 10. Staff members told the board they already had the college’s revenue numbers, but they would need detailed information on the college’s expenditures as soon as possible before they could offer any suggestions. Wages promised to provide that information in a timely manner.

She said the board of trustees had regular meetings scheduled for Sept. 10 and Oct. 22, and the board could schedule a special meeting to discuss the staff’s input.

“We need you guys to direct us,” Siemer said.

According to the resolution, these layoffs would become effective in 60 days.

The three full-time classified management positions to be eliminated included the NRA/ gunsmithing and POST coordinator, the coordinator of inmate education and the director of development, alumni and community relations.

The manager of custodial and security services position would have been reduced from full time to half time.

The vacant bargaining unit positions to be eliminated included an assessment technician, an administrative assistant, a bookstore assistant, a library technician II and a transfer center assistant.

The administration’s explanation of the budget’s evolution, reductions

Dr. Randy Joslin, director of institutional effectiveness, and Terry Bartley, controller, made a presentation to the trustees regarding the budget’s evolution and the history of the reductions.

According to their report, budget forecasts from the California Community College Chancellor’s Office as of July 2018 predicted a significant increase for LCC based on the implementation of the state’s Student Centered Funding Formula.

Their report sought to answer the question, “What did the LCC administration know about the budget and when?”

Joslin said the college expected a 17.3 percent increase in its budget, but Siemer asked Joslin if he had attended a January meeting where a decrease to the budget was discussed. Joslin said he attended the meeting in question, but he didn’t remember any discussions about a budget reduction.

Siemer said he had spoken to others who attended the meeting, and they told him the budget reductions were discussed.

Bartley said when the California governor revised the budget in March, the college expected to receive its full funding.

According to Joslin and Bartley’s report, “These increases were still expected across the state up to the evening of April 26, 2019.”

In March 2019, the college received a memo from the Fiscal Services Unit with the chancellor’s office advising all colleges that “they would continue to work with the governor and legislature to provide full funding of the general apportionment” according to the SCFF formula.

The administrators reported that during a budget workshop held in Sacramento on July 22, 2019, the districts were cautioned that any changes to the budget would not be issued until February 2020.

According to the report, “If there is any increases (sic) to come out of Sacramento, we will not find out about it until at least … next February. The funding formula which was known as Schedule C is no longer available on the chancellor’s website … Schedule C is a breakdown of the SCFF budget apportionment that LCC receives.”

After the July 22 budget workshop, the monthly payment schedule listed the college apportionment as $10,940,490.

On July 25, Dr. Hall, LCC superintendent/president, announced that annual STEP increases for administrators, manager and confidential positions would be eliminated this year due to the budget shortfall.

On Aug. 6 and Aug. 7 members of the college administration met to address the budget shortfall and identify further potential areas for reduction including significant reductions to travel and supply budgets, not filling vacant positions, elimination of some positions that have minimal effect on students and student programs, a focus on areas where multiple individuals have similar jobs and identifying a number of positions for elimination.

According to the presentation, the college would reduce its staff by 13.53 percent by eliminating 18 of 133 positions — 3.5 from administration/ management, zero from faculty, four from classified and 10.5 that would remain unfilled.

He also alleged the college had millions of dollars of projects underway and the college was speeding toward oblivion.

Johnny Garvilla, the college’s director of development, alumni and community relations, said it was time for the college to look forward toward a solution and not backward.

A person attending the meeting suggested the college could reduce its budget through furloughs rather than eliminating positions, but it was unclear how that solution would work.

Giese said he wanted to hear what the college staff had to say so that everybody has an opportunity to contribute to the solution.

Hamilton said complaining about the budget wasn’t going to get the college anywhere, and he too was in favor of hearing from the college staff.

Parks noted the proposed reduction to the gunsmithing program, which he said one of the college’s best programs.

Wages said she also wanted to hear from the staff.

A response from the California Community Colleges Chancellor’s Office

Christina Jimenez, a public information officer for the college chancellor’s office, responded to the newspaper’s questions about the LCC budgets.

She said LCC’s budgets have not been cut — they actually have increased.

The trustees discussed four items in closed session — one matter regarding employee discipline/dismissal/release and three regarding a conference with labor negotiators.

The Lassen Community College Board of Trustees’ next regularly scheduled meeting will be held at 6 p.m. Sept. 10.