Following the events Monday, Aug. 16 at the evacuation center at Lassen Community College, Health and Social Services Director Barbara Longo wanted to figure out what happened, she shared during the Tuesday, Aug. 24 Lassen County Board of Supervisors meeting.

“Our staff has done an amazing job and I just think that this needs to be publicly addressed,” said Longo to the board. “So here I stand before you to do that.”

The day after an attempt to transport Plumas County residents from the Lassen Shelter to one in Portola, social media posts and comments made at a Plumas County Board of Supervisors meeting found focused on the event.

During the Plumas meeting, supervisor Greg Hagwood dialed in a Plumas County evacuee who explained what he experienced, when he was trying to pack up his four children and three dogs from the shelter with little warning, and was told that if he didn’t, he would be cited and arrested. Then, the caravan of evacuees had to return to Susanville after Highway 395 became impassible due to the fire, according to an article detailing the meeting on PlumasNews.com.

During the meeting, Hagwood said, “Lassen County if you’re listening, you should be ashamed of yourselves. Understand, we would never, ever treat anyone in the way these people have described.”

However, During the Tuesday Lassen board meeting, Longo said Lassen staff served as a messenger for the transferring of Plumas County residents, and that better co-messaging from both counties should be the norm in any future events.

During the meeting, Longo said she spoke to several people, including the Plumas County Sheriff, shelter residents, staff and Red Cross, and through the interviews put together a preliminary timeline of what occurred. She informed the board she would present a timeline to them once it was complete.

Longo said Plumas County officials called asking for mutual aid to open a shelter, and the LCC medical center was shifted to a center for Plumas County evacuees, she said there were more than 647 four-hour shifts covered by Lassen County staff.

Then, Longo said, referring to the rough draft of her timeline, on Aug. 13 there was an attempt to repopulate Plumas residents back home, which was delayed due to increased fire activity.

“It was clearly a stressful situation,” she said, noting the residents staying at the shelter were in a tense situation of not knowing when they’d get to go home.

That Monday, though, she said county leadership started looking into the possibility of evacuating the Janesville area, as fire activity was increase in the region. She said they had conversations knowing the shelter had capacity to manage the new evacuees.

However, Longo told the board that county leadership was informed that Plumas was considering either repopulating areas, or moving evacuees to a shelter in Portola.

“Here we are, Monday, and we learned late in the afternoon that they were going to send up buses. The conversation I heard when I was talking to some folks was that they were going to be sending up buses, and they wanted us to let people know the buses were coming and they would be going back to Plumas County,” Longo said, adding Lassen staff started informing shelter residents of the change.

She said there was a CHP escort who was going to escort drivers ready to go as activity was increasing Highway 395.

She acknowledged a kind of evacuation trauma going on.

“Some people there at the shelter were upset about all this. And we get it, we totally understand all the different tensions and everything going on,” Longo relayed to the board

She also said there was a small group who were “angry and aggressive” towards staff relaying the message who were allegedly threatening to “riot.”

Longo noted staff called the Susanville Police Department. She recalled the police went to the group.

“The PD said to them if you continue with behavior, you’re going to be arrested.”

In a statement released a few days after the incident, the Susanville Police Department wrote, “At approximately 6:30 p.m. on Aug. 16, officers from the Susanville Police Department, while conducting emergency evacuation advisories, were dispatched to Lassen Community College on a report of a disturbance involving an unknown number of people. The events that occurred subsequent to our arrival are currently under review.

“The Police Department and its members understand these are emotional and trying times for everyone in our community and surrounding areas. We continue to stay committed to keep our city, our community members, and welcomed visitors safe while working in a professional and courteous manner. No arrest(s), citations, or use of force was used. Officers were able to clear from the shelter and continue with their evacuation notifications in the city after a representative from Plumas County arrived.”

Longo mentioned that in order to better understand what went wrong, she spoke to some who were residing at the shelter.

“From this information, so far, what I’m finding, is that people were very upset because it was a short period of time that they were being asked to pack up and go. That makes sense,” Longo said, saying some were wanting to wait until the next day. “Again, being the messengers, we didn’t order the buses, we didn’t place the order, make the decision for them to go. That was the message we received.”

“That absolutely did not happen,” she said, adding the Plumas County Sheriff was at the shelter helping evacuees on to the buses and joining the caravan.

“This whole event took place. It was rather unfortunate. But I think, moving forward, we will certainly, obviously work to help any partners that need help, but we really need to have co-messaging. It was really unfortunate our staff had to be the messengers,” Longo said. “

Longo thanked Jenna Aguilera and Danielle Sanchez for running the shelters, and the county staff who work at the shelters.

“I’m here to support my team, and to support Plumas County too — they’ve gone through a lot — but knowing in the future we will do things differently to support the residents of both of those communities,” said Longo.

Terry Peters, 19, was arrested on murder charges after an early morning Wednesday, Aug. 10 incident that allegedly resulted in…

Kameron Dennis, a suspected package thief, was arraigned Aug. 5 on felony charges of conspiracy and possession of stolen property… 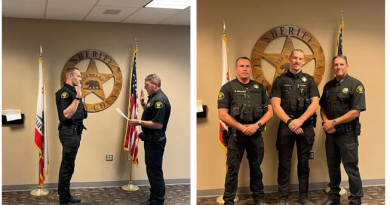 Correctional Deputy Jesse Traetz was promoted to the position of Deputy Sheriff today. Traetz has been assigned to the Lassen…