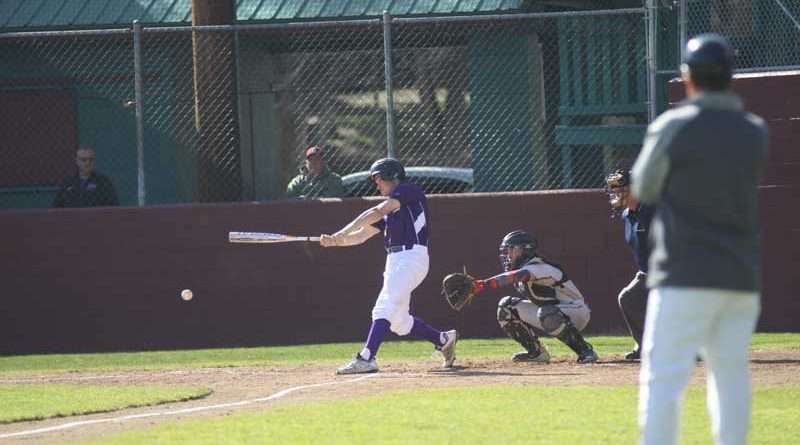 If the first game of league gives any indication as to the outcome of the 2018 season, the five opposing teams in the Northern Athletic League don’t stand a chance against the Lassen High School Grizzlies.

The game was a quick victory for the Grizzlies as the Eagles were sent packing with a final score of 12-2 on the board in only five innings.

Seth McCart served as the Grizzly pitcher for the entire five innings.

With a total of 10 seniors of the 16 players on the team, the Grizzlies are clearly a team of experience and loyalty to the game.

The Grizzlies started off sharp with two runs scored in the bottom of the first inning to tie things up 2-2.

During the top of the first inning, the Eagles believed to have bested Lassen with two runs. The first resulted when one Eagle was hit by the pitch, stole second, stole third and was finally brought in. The second was the result of a double and a single to follow.

However, Lassen was determined to square things up and to keep the Eagles at two runs for the remainder of the game.

During the bottom of the first, Darrell Miller started things off with a single and then advanced to third thanks to a double hit by Miles Ormachea.

Jacob Bennett then loaded the bases with a walk, and while Spencer Lively was up to bat, a wild pitch sent Miller home, Ormachea to third and Bennett to second.

Cole Dyer hit a sacrifice fly that marked the second Grizzly out for the inning, but it also allowed Ormachea to make it home.

The score was thus 2-2 by the start of inning two.

During the top of the second, West Valley attempted to gain the upper hand once more, but with two Eagles out at first and the third caught stealing, the Grizzlies were back on the plate.

Dustin Morgan singled, and with Malik Delgado was hit by the pitch, Morgan advanced to second.

Josiah Snell hit a sacrifice fly and marked the first Grizzly out, but the act allowed Morgan to advance to third and Delgado to reach second.

Miller then hit a double and sent both Morgan and Delgado home.

Ormachea singled to send Miller to third, and a sacrifice hit from Bennett brought Miller in and ended the inning with Lassen up to a 5-2 lead.

Inning three began with the Eagles suffering their first out at first base, followed with a hit and ended with a double play to get the Grizzlies at bat yet again.

Dyer singled and was subbed out with Finn Osborn once reaching first.

Zachary George followed with a double that sent Osborn to third, and a single from Morgan brought Osborn home.

With George at third and Morgan at first, Delgado hit a double that sent both boys sprinting home.

Snell was next at bat, but struck out and sent Miller to the plate. While Miller was at bat, Delgado stole third on a wild pitch. Then, a sacrifice fly from Snell brought Delgado home and ended the inning with Lassen ahead 9-2.

Inning four was unproductive for both teams as the West Valley Eagles didn’t land a hit and the Grizzlies only landed one hit before the third out was called.

In contrast, the fifth inning was far more productive – at least for the Grizzlies.

After watching the Eagles secure two hits, but no runs, Lassen was back on the offense with Morgan first at bat.

Morgan was hit by the pitch and thus sent to first. Delgado followed with a single that sent Morgan to second, and with a bunt from Cade Lile, the bases were loaded.

Miller was up to bat next, but a hit by the pitch sent him to first, Lile to second, Delgado to third and Morgan in.

With the bases loaded again, Ormachea hit a sacrifice fly that sent Ormachea in.

Bennett walked to load the bases for the final time, and a single from Lively brought Lile in to end the game with 12-2 on the board.

Head coach Scott Foreman said, “West Valley’s won our league the last two years, so that was our goal: To come out and set a tone, especially against them. I think we did. But once again, lots of stuff to clean up. We made lots of little mistakes. We are more than capable of cleaning up; we’ve just got to get it done.”

Prior to taking on the Eagles at home, the Grizzlies traveled to the ACA Tournament Thursday, March 22 through Saturday, March 24.

While at the tournament, Lassen went 3-1 with wins against Durham, Mt. Shasta and Yreka and a loss against Fortuna.

Lassen opened the tournament against Durham with a 9-0 win.

Also collecting hits against Durham were Osborn and Delgado. Delgado also had one RBI.

Game two at the tournament was against Mount Shasta in which the Grizzlies won 10-8.

Game three was the only loss for Lassen with Fortuna taking the win 11-10.

Pitching against Fortuna was Osborn for five innings with two strikeouts and two runs, Painter for 0.2 innings with six runs and Delgado for the remainder of the game with three runs.

Game four against Yreka allowed the Grizzlies to end on a high note with a 13-3 victory.

Pitching against Yreka was Painter for the first four innings, striking out five and allowing three runs. McCart then pitched in relief for the final inning, in which he allowed no hits or runs.